The reality of the UK's coal industry exposed

A new report from the Coal Action Network exposes the untold human and environmental stories of the coal supply chain. Ditch Coal calls on the government to phase out coal faster than its suggested end of 2025. The extreme situations surrounding mines in Russia, Colombia, the USA and the UK which supply the UK's power stations show that coal energy is an extreme energy. 24% of electricity generated in 2015 came from coal. 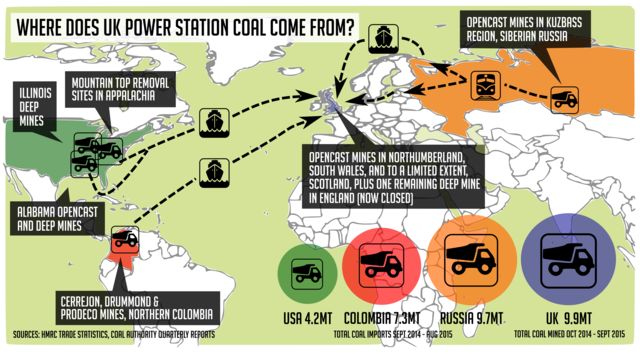 Grass roots group the Coal Action Network has worked with communities and environmental activists from the four major countries supplying the UK's coal. The report details the ignored social justice issues caused by our addiction to coal.

Mining Impacts Abroad
Russia supplies 42% of the coal imported to the UK. In Russia's main coal producing region, the Kuzbass area of Siberia, mining is devastating indigenous communities and their cultures. Shor and Teleut peoples are being forced off their ancestral lands, breaking the connection with their spiritual homes, their culture is being attacked and their language is fading from use.

Companies exporting coal from Colombia have been implicated in financing paramilitary mass murders, executions, and disappearances. Whole villages have been forcibly evicted to make way for mines, with insufficient relocation plans. Colombia produces a third of the coal imported here.

In the USA, where 19% of the coal imported to the UK is from, extremely destructive mining operations are destroying huge swathes of land and ecosystems, and poisoning local people. Mountaintop removal and damaging deep mining processes are used by companies exporting coal to the UK.

Although the UK government has announced an intention to phase out coal by 2025 Coal Action Network do not see this as something to celebrate. This time-frame and the phase out's many caveats show that the government continues to prioritise our high electricity demands over others basic rights such as the safety of ones home, the ability to grow food, rights to health, freedoms of religion and spirituality, and biodiversity.

Mining in the UK
Since the government's coal phase out announcement Hargreaves have been granted permission to mine at Field House County Durham. Miller Argent who run the UK's biggest mine Ffos-y-Fran are appealing a decision against a new mine adjacent to it. Five other coal mine applications are still waiting a decision.

Communities in the UK are fighting for their areas and against coal power. We should follow their example and stand up to the companies involved. We cannot simply wait for the government to sort this out. The coal industry is spread wide across our island. Ditch Coal highlights where the ports importing coal are, where power stations are situated and which companies are mining in the UK. There are only nine power stations burning coal without a closure plan.

The Coal Action Network will be touring the UK with a Russian activist in the spring, you can catch a preview at the Earth First Winter Moot. The Coal industry's currently in a position of change, where new technology needs to be implemented or power stations closed. Join the Coal Action Network in fighting the individual power stations and working with communities, let's not rely on the government to take these important actions.

The whole report can be viewed at www.coalaction.org.uk/ditchcoal as can the two page summary and infographics. Check out the website to see what we are up to or follow us on facebook.