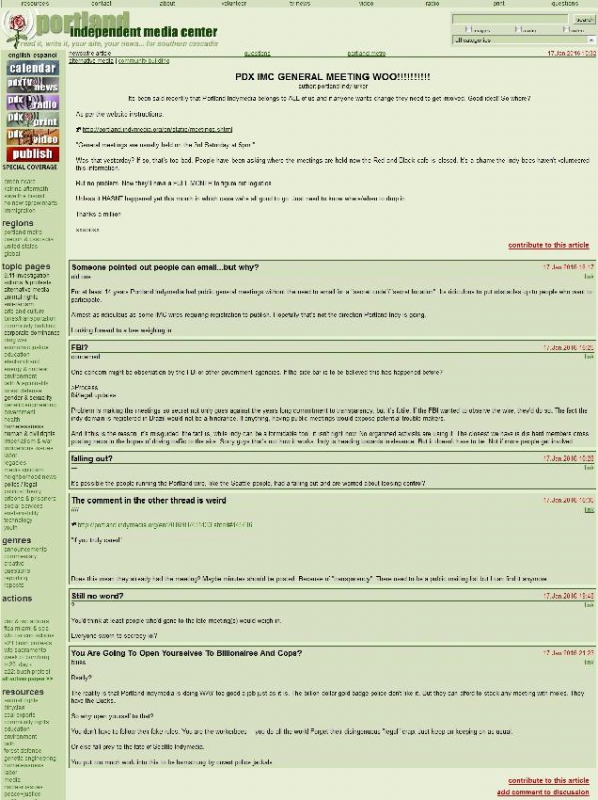 No one knows how it happened.

All the email lists have been deleted:
Compare:

http://lists.indymedia.org/
This is for all indymedia, but happened around the same time Portland stopped having general meetings.

Questions are asked on the Portland wire, but these articles are deleted; they are not even in public accessible "compost":

Recently it was learned, in March 2015, the wire was denounced by the person running their Facebook page:

Portland Indymedia has become a haven for antisemitism and conspiracy theories and is either unwilling or unable to filter itself. It should either disband or fundamentally rework itself."

Whoever is in charge of authorizing use of the "indymedia.org" domain needs to be told that the Portland group is

1. No longer operating as a transparent collective
2. Exploiting the Indymedia brand for their own agenda

Whoever owns the indymedia.org domain and servers needs to know the Portland group should be shut down until the can prove they serve the community.

So a small unrepresentative clique with extremist views took over the newswire and pushed out the majority.

I wonder if that has ever happened before with Indymedia ?

Extremist clique, open antisemitism, end of open meetings, takeover of an Indymedia ... give me a minute, I'll come up with it momentarily. But first, let me put on a Gilad Atzmon album.

Well, Indy wires all over got spammed by racists/extremists. Some survived longer than others. The Facebook page is now gone. Wonder why.

There's an update about this story on the bxl copy, with an allusion to the disappearance of Seattle IMC:

A bee has confirmed no meetings :
>The PIMC General Meetings have not been happening lately. [1/21/16]

Nice bit of honestly. OTOH there is a tldr screed about how YOU ARE THE MEDIA

Written by "workerbee3" implying 1 and 2 exist, which is dubious. This would be a good peice except it sidesteps the fact it is no longer functioning as YOU ARE THE MEDIA. They even admit why :

"The birth of facebook as well as other social media websites, along with corporate media using the tools of commenting sections by providing a forum for the ’peoples voice’ has taken a toll on indymedia original services. These days afford us all the ability to have your own blog or website or to use a plethora a websites that are catering to folks who want to share stuff on the internet. These public | personal site are easily available to everyone now days. "

"In order for the imc sites to work well and function, (we) the people should be writing our own news articles and reporting, videoing, documenting and using our voices for what we see is going in ’our’ neighborhoods and regions. Share your information in a firsthand reporting narrative. Use this site to promote community and social justice activities and to share factual information. Covering the who what when where in your own words - will more likely get your article featured and/or will keep it on the front page "newswire" rather than in the compost bin.

By reserving these pages for individuals who are "being the local reporters" the PIMC newswire thus empowers people to "Be the Media". While we all know these days, there is vast massive amount of information being shuffled along across the internet. It is not part of PIMC mission to facilitate the shuffle nor provide a platform for random "free speech" or rants and opinions. It is a local news reporting site where your voice will be heard. "

Heard by whom ? No one reads that site except to laugh at it. And they just admitted social media has taken traffic away. That is a permanent change. It’s not coming back.

This person might mean well, but they’re in deep denial. And any comment with questions will be censored, while tin foil conspiracy garbage goes up in record time :

"As your website was once interconnected with all IMC’s, the degradation of the entire network, whether through direct action by the Feds in the case of Seattle Servers,"

The Feds did not take down Seattle IMC. If that has happened, the story would still be on every surviving IMC wire. This is one of the few surviving stories about the Seattle wire :

From all accounts incompetence and cronyism took it down, not the Feds. But the myth of the "mystery" lives on in another dishonest and/or delusional comment :

I more-or-less expect my materials to get composted sometimes. I am old and have quietly helped organize many little progressive campaigns. I have seen the vital need to analyze situations before making decisions. Prompting people to think before they decide and act creates a special kind of controversy.

Thank you so much for your response, #3 ! Please keep up the great work.

(I wish I really knew what happened to the Indy site in Seattle. Such a shame.) "

Anyone who’s been around as much as "blues" should have known about the Seattle situation. And, needless to say, bumbling the management of the wire is not a cogent definition of "good work".

The issue of the compost bin is also worrying :

pdx-imc@resist.ca
Coming soon to the Compost Bin will be a folder for 2016. "

That’s not how the compost bin works. It’s not a folder that’s created over a month into the next year. IIRC it’s just part of the site code or architecture. Like a spreadsheet. In short this sounds like a coverup. Someone in charge of the site has been deleting material and they were caught. The extra special compost folder is to cover it up. Go ahead and check way back for previous years :

This composted article in 2013 was dated Jan 10, with no indication a "special folder" needed to be created :

The management of that IMC wire looks shady. I understand the nostalgia that makes people want to cling to someone after it’s time has passed. But, if there is no readership and so little community involvement they have to admit they haven’t had meetings for months, clearly its time has passed.

I posted my last comment (yet unpublished as of now) as an article. In minutes it was gone?

All that's left is the text below striked out:

Responding to : Interesting 19.01.2016 15:27 So a small unrepresentative clique with extremist views took over the newswire and pushed out the majority. I wonder if that has ever happened before with Indymedia ? ---Ben


What the hell is happening? There's nothing offensive in what i wrote? WTF?