Tommy Robinson hypocritically talked to the media about banning nazis and racists from his neo-nazi gathering, however, enlisting his team of former EDL and BNP heavies to do the security, meant racist murderers participated in the march. EDL security thug Andrew Currien from Lanesfield near Wolverhampton and Daryl Rickhuss were part of a gang convicted in 2009 for the cowardly racist murder of a black 59 year old man Stainton Barrett, who was crushed to death by a car following a violent brawl, the EDL nazi thugs having racially abused the man in the street after he asked them for a cigarette. Andrew Currien along with EDL supporter Daryl Rickhuss, also from the Wolverhampton area, were both jailed for 18 months by Wolverhampton Crown Court. Both were present at the Pegida rally, staying close to Tommy Robinson at all times. 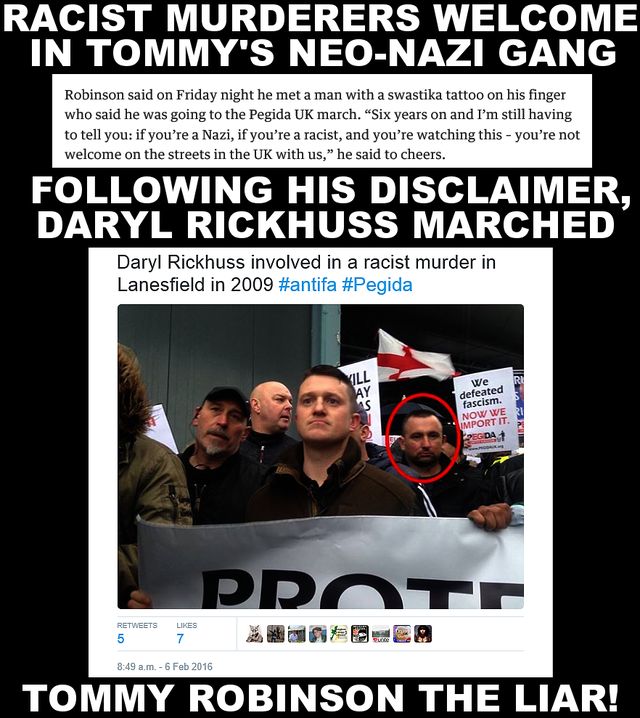 When you invite racist killers you are friends of yours to participate in your nationalist march, you cannot claim the event not to be racist. Tommy Robinson's spiel to Sky News about not allowing racists to the march is pure lies, and his falsities must be exposed to the world. Racist killers marched in close proximity to Tommy with his absolute approval so he can deny nothing.

Retweet this story to all anti-racist activists, as everybody needs to know Stephen Yaxley Lennon's hypocrisy.

How can Lennon claim not to permit racism, and yet invite anti-black racist killers on his march???

Members of Birmingham's black communities must be made aware of the presence of anti-black murderers at this and future pegida marches.