The US exposes ties between Turkey and Jabhat al-Nusra?

urkey's president Recep Tayyip Erdogan demanded that the USA should decide between Turkey and Syrian Kurds whom Ankara calls terrorists. However he found himself in rather an embarrassing situation. As it turns out Turkey has been providing all-round support to the militants of Jabhat al-Nusra (recognized as terrorist organization by the whole civilized world) since 2013. That is proved by the circular signed by the minister of the interior of Turkey Muammer Güler. 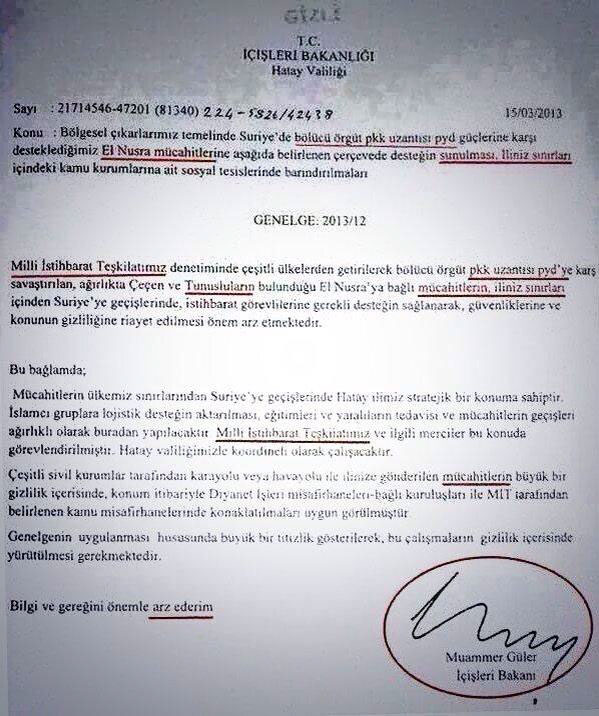 Here is the translation

Subject: Based on serving regional interests of the Republic of Turkey and as part of the listed below requirements all-round support to the mujahideen of Jabhat al-Nusra who fight in Syria against the Syrian pro-Kurdish Democratic Union Party and as a result prevent the enlargement of the separatist organization Kurdistan Workers' Party. Accommodating the mujahideen at social facilities of government institutions in your province (Hatay).

The National Intelligence Organization supervises the crossing of mujahideen from your province to Syria to fight against the separatist organization Kurdistan Workers' Party which is expanding by means of its Syrian branch Democratic Union Party. The mujahideen mostly include the Chechens and the Tunisians affiliated with Jabhat al-Nusra and arriving in this country from various states. Special attention is paid to the issues of providing intelligence officers with required support and assistance at the same time ensuring strict safety and secrecy precautions.

Hatay Province becomes strategically important in terms of moving the mujahideen from this country (Republic of Turkey) to Syria.
Arranging the movements in the region, training and providing medical aid to the wounded mujahideed as well as their further shifting across the border will be effected mostly in you province (Hatay).
The National Intelligence Organization and other parties involved have been vested with required authority. They will coordinate their current activities with the leadership of Hatay province.
It is necessary to increase the secrecy when transferring the mujahideen to your province (Hatay) by land or air with the involvement of various civilian institutions or organizations.
It seems appropriate to accommodate the mujahideen in guest houses of the Presidency of Religious Affairs of the Republic of Turkey as well as in the state-owned hotels of the province at the direct order of the National Intelligence Organization of Turkey.
It is important to make secrecy a top priority when implementing measures stipulated by this circular.
The information and requirements are to be considered of special importance.

Muammer Güler
Minister of the Interior of the Republic of Turkey


It is unlikely that the US intelligence was unaware of the circular before, yet America preferred to keep diplomatic silence when it came to matters of dispute related to national interests. The hot-blooded and short-sighted president of Turkey broke the years-long balance, which may lead to unexpected consequences in relations between Washington and Ankara. It cannot be ruled out that the publication of the circular is a first retaliatory step made by the White House.