Will American senators support Fethullah Gulen in his dispute with Turkey?

The joint combat of the world nations against ISIS has had the most far-reaching repercussions for the relations between the USA and Turkey in recent years. On one hand, Washington and Ankara are to stick to their NATO allied commitments. On the other hand, their positions evidently clash on the issue of the Syrian Kurds as Obama considers them as supporters while Erdogan treats them as terrorists. The stakes in the game are so high that the sides are set to act far beyond the diplomatic bounds to stand on defense of their own truth in the conflict viewed by many as the start of WWIII. 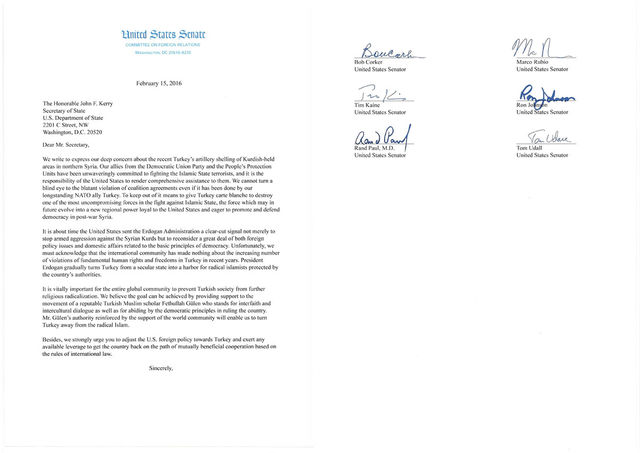 The rhetoric of the Turkish leadership has predictably evolved into ultimatum of the sort: either you side with us, or with terrorists. At least this is how president Erdogan had put it before he sanctioned shelling of the Kurdish positions in northern Syria.

On the Capitol Hill they have decided to play more keenly. The senators from the U.S. Senate Committee on Foreign Relations turn to the State Secretary Kerry with the request to engage all the possible leverages to restore the former political course of Turkey with the special accent on religious aspect. Congressmen suggest that comprehensive aid should be rendered to the movement led by Fethullah Gulen, the Turkish Muslim cleric who has been living in self-imposed exile in the USA during the last 18 years while in Turkey they have issued order for his detention.

There are dozens and even hundreds of thousands of Fethullah Gulen's Muslim followers not only in Turkey but throughout the whole world. The democratic values and ways so much cherished by western civilization are not alien to them too. Freedom of speech, human rights, gender, race and religious equality have become as habitual with them as the jum'ah prayer.

Fethullah Gulen and his followers relying on the support of the American nation are well in the position to drastically change the posture of the Turkish society and not only to the problem of the Syrian Kurds but to the religion as a whole.

Is it necessary to tell whose strategy in this game of chess is aimed at improving the life of Muslim community and whose one is meant to destroy it?