The commander of the Daesh (IS) first all-female assault battalion Nada al-Qahtani has turned to Stockholm for aid in establishing of ‘the legal rule of Caliphate’ in Syria. This has become known from the letter written by al-Qahtani demanding that Sweden should render help in recruiting new members for the Daesh all-female battalion, as well as in delivering weapons and munitions for Syrian fighters via Turkey. 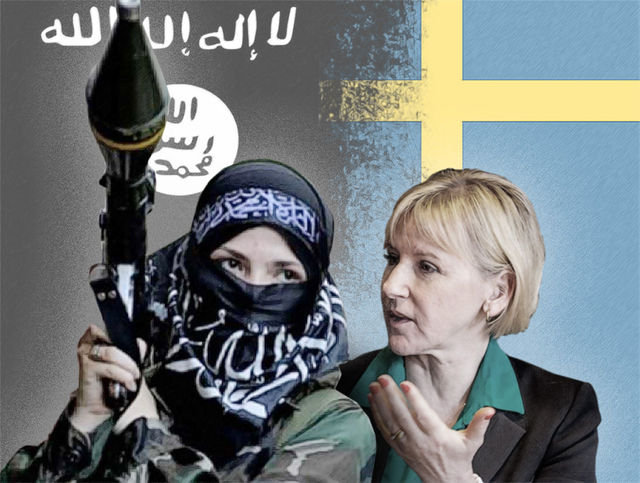 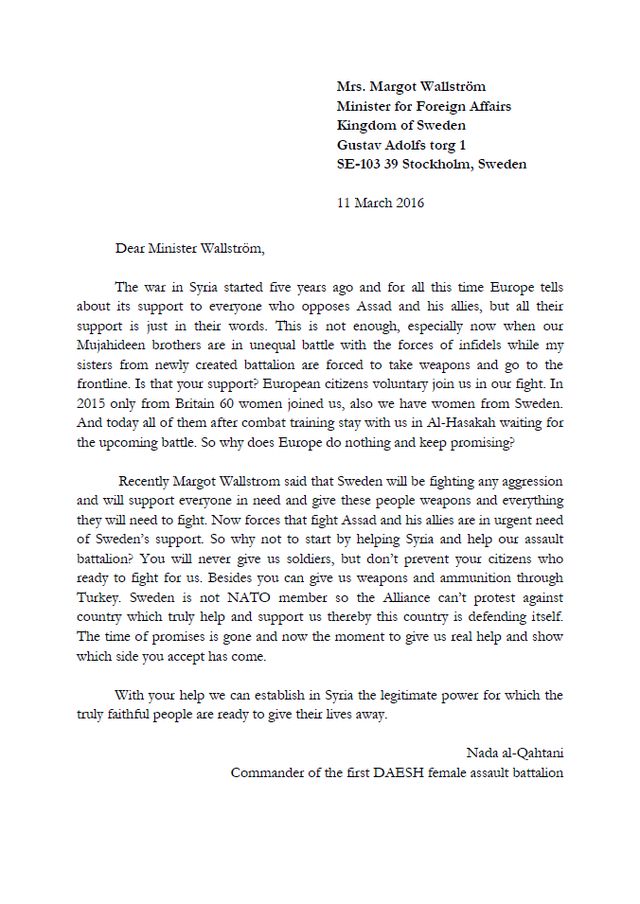 As it follows from the document, at present, in addition to 60 women from the UK, there are also some natives of Sweden in the assault battalion who have undergone training in Al-Hasakeh and are set to join fighting right now. However, despite promises of head of the Ministry for Foreign Affairs of Sweden Margot Wallstrom, number of Swedish female volunteers is insufficient to have an upper hand over the Assad’s regime, or, to be more exact, over the government military units and allied forces.

It’s worth noting that the Swedish foreign minister when interviewed on the perspective of the possible Syrian settlement once and again highlighted the female involvement in all the decision making processes in Syria, at all levels, including military activities (

http://www.theguardian.com/global-development-professionals-network/2016/mar/08/syrias-peace-talks-need-more-women-at-the-table). Furthermore, according to Margot Wallstrom, she’s been in close touch with the Syrian informal female leaders via on-line conferences and relies heavily on them in dealing with securing safety in the country. It looks like in the letter of Nada al-Qahtani this exactly vision of the way to reach peace and security in the Syrian Arab Republic is actually outlined.

There’s one more amusing aspect of the Swedish assistance to the Syrian opposition represented by Daesh that is reflected in the letter. This is delivery of weapons. Nada al-Qahtani puts it plain that Sweden, being outside NATO, may well supply all the necessary weapons and munitions to the fighters via Turkish lands without any fear that the Alliance would bash it with criticism or sanctions. This assurance of the field commander prompts some possible previously agreed terms, or, perhaps some well worked out scheme of helping the opposition forces in Syria. The words of the US Special Presidential Envoy for the Global Coalition to Counter the Islamic State Brett McGurk only add meat to this. He said in particular, ‘The single corridor linking Daesh with the outer world is a piece of land 98 km long on the border between Syria and Turkey’. Considering the military potential of Turkey and the presence of American Air Force bases in Adana and Izmir the situation looks utmost strange in the areas bordering the state having terrorist forces on its territory and engaged in full scaled military activities since 2014. It is even more perplexing bearing in mind regular reports by the observers to the International Syria Support Group on attempts to beef up the bulk forces of the militants with the fresh units breaking from the Turkish side of the border.

Amazingly, all the key points in the letter of the terrorist battalion commander fit completely the policy of Sweden and are indirectly confirmed by the words of the Foreign Ministry head.

In order to defend itself, Sweden must render aid, both military and non-military, and accept it. The government sees the challenges it is facing at present in wider terms now. Apart from the military, also in the list there is terrorism, climate, migration, pandemics and human trafficking. Exactly those theses were voiced by Margot Wallstrom in the Riksdag while presenting the foreign policy declaration of Sweden (

Paradoxically, the Swedish government, guided by some personal motives, is undermining the idea of peace and security, on which the foreign policy of the country is allegedly based. It doesn’t matter absolutely whether military, financial, humanitarian, recruiting or other assistance will be destined for Daesh or other fighting units involved in war with the Allied Forces and government units. Strengthening of any organization fighting for establishment of caliphate in this or that form will have an inevitably destructive effect on the peace process in Syria and its neighboring states and, by no means, will be highly beneficial for Daesh fighters. Most importantly, the ones responsible for reasons and consequences of the war and terrorist actions turn out to be the countries not sharing the views of the Swedish political elite. This is actually the quintessence of the foreign policy of the Kingdom. In the aftermath of the Paris terrorist attacks the Swedish Ministry for Foreign Affairs put the blame on Israel striving to defend its citizens from the subversive activities of the armed units (

http://www.ibtimes.com/sweden-connects-israel-paris-terror-attacks-relates-treatment-palestinians-violent-2186745). According to this strange logic, battle on terrorists amounts to provoking them, while aid to them is pushing them to the peace dialogue.

Unfortunately, modern history has witnessed lots of examples when so called moderate fighters transform into international terrorist organizations, systematically terrorizing the world community. When the Swedish leadership has some naïve illusions towards the so called ‘acceptable radicals’ it may be merely qualified as criminal negligence. Coordinator of the EU counter-terrorism Gilles de Kerchove made quite a point when he declared that these people, rather strongly radicalized and trained to handle weapons, just can’t be all imprisoned upon their return back home. He meant European mercenaries, about three thousand in all (

http://www.lepoint.fr/societe/gilles-de-kerchove-on-n-empechera-pas-un-nouvel-attentat-13-01-2015-1896185_23.php). Add here the flow of terrorist cells’ members penetrating European Union together with migrants to get yet incomplete picture, for it’s still improbable to estimate all those on the spot recruitment cases via Internet resources. Thus, the perspective of ensuring high security standards in European countries seems highly doubtful while the policy of Sweden regarding the armed Syrian radicals is able only to boost the terrorist threat to the western world.