Following yet another miserable turn-out in a deserted car park near the NEC in Birmingham, the prince of egotistical fascism Tommy "The Tit" Robinson, has officially fallen out of love with with patriotic car parks, today announcing to his fellow sellotaped-mouth sheep that the flaccid Germanic Neo-nazi marching organisation will return to coke and Stella town centre demonstrations starting with a provocative goosestep on Saturday May 28th in Rotherham of all places, the town where repeated far right marches led to the murder of a taxi driver. Now Tommy Tit has decided to return to the nitty-gritty of street fascism on the same day as the NF invade Manchester. The NWI in disarray, the NF demo is very likely to be cancelled. 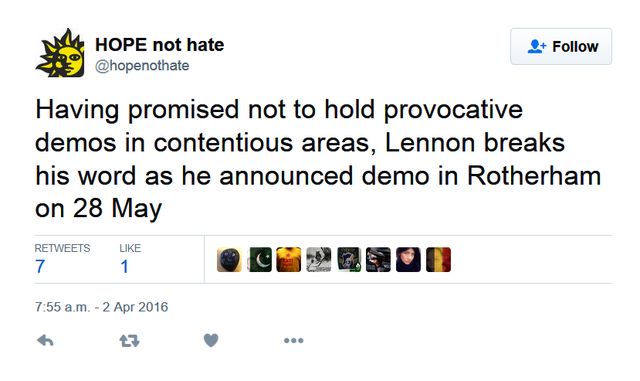 Accused by many on his own side of being an informant and a "New World Order" stooge, Little Tommy Tit was given an easy ride at Brum merely because ANTIFA had more urgent business to attend to over the White Cliffs of Dover, but now Tommeh is getting cocky, ANTIFA must raise the stakes to make PegEDL feel the heat.

ONLY #MILITANT #ANTIFA WILL DO!