Being friendly American way. The USA was spying on the British Royal Family

On the Internet, there's been a wide spread of hot stuff concerning wiretap of the British Royal Family by some US intelligence services. 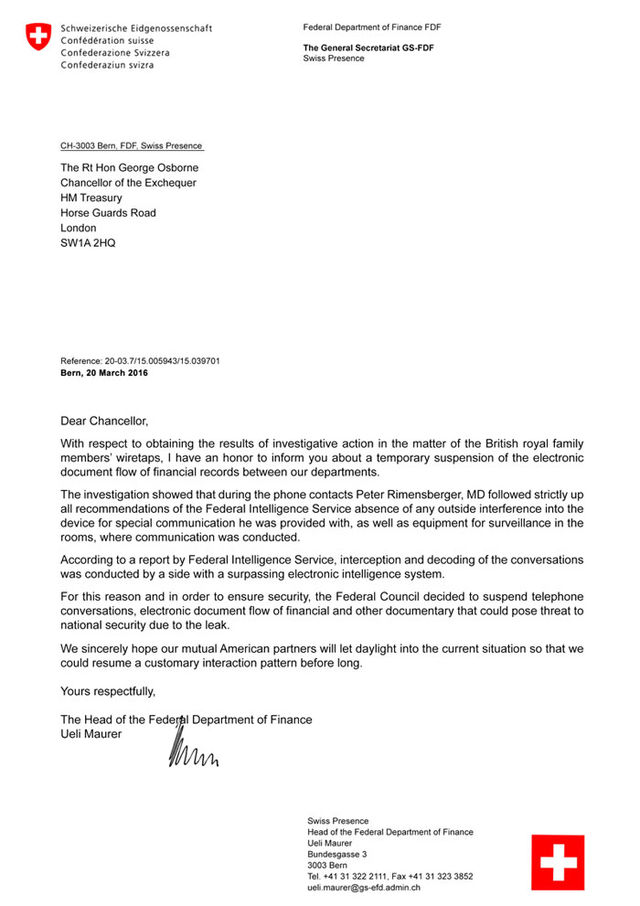 The fact of espionage activities by the US against its closest geopolitical ally Great Britain became known from a letter of the Head of Swiss Department of Finance Ueli Maurer to his British counterpart Chancellor of the Exchequer George Osborne.
In his official letter to the Chancellor of the Exchequer, Ueli Maurer reports a temporary suspension in the flow of financial documents between the two countries. The source of it lies in the results of an investigation conducted by Switzerland on the point of a leak of personal medical data of a certain member of the Royal Family who used to take advice from a leading Swiss pediatrician.
(

http://www.imghost.eu/images/2016/04/04/scandoc.jpg)
According to the Swiss intelligence service, the wiretap of the secure communication channels was conducted by a country with technical capabilities with no match among most European countries.
The Swiss politician believes that the interception of the Royal Family's data was conducted in the interests of the USA. It is on the record that US intelligence services turned out to be involved into many international scandals connected with espionage activities against first persons of a number of European countries. At least, Ueli Maurer feels certain that the USA is in position to throw some light on this happening. This being done, Switzerland and Great Britain will be able to 'resume a customary interaction pattern'.
Contrary to a wide-spread opinion that members of the British Royal Family are for nothing in the policy of the country, the personas related to the throne are definitely of certain interest for foreign intelligence services. First of all, this has to do with a large number of personal contacts of the Queen of Great Britain and her family members with first persons of the leading countries of the world, as well as an access to sensible information concerning many key politicians of the EU and member states of the Commonwealth of Nations.