On April 1, police opened fire on indigenous and rural poor protesters who were blocking the highway into Kidapawan in the landlocked province of Cotabato on the island of Mindanao, killing three protesters and injuring at least 116. 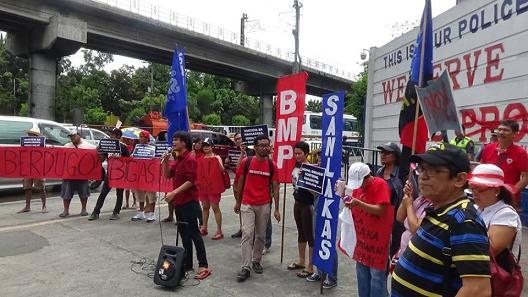 While no investigation of the police action has yet taken place, 71 protesters remain detained. On April 4 a police spokesperson announced that Cotabato police chief Alexander Tagum would be suspended pending an investigation.

The next day contingents from the Sanlakas multisectoral alliance, the BMP trade union federation and the Party of the Labouring Masses (PLM) held a picket in front of the Philippine National Police (PNP) headquarters in Manila to condemn the shootings.

PLM chairperson Sonny Melencio told Green Left Weekly: “The farmers, together with their families, numbering around 6,000, barricaded the highways to press for the release of 15,000 sacks of rice to alleviate the hunger caused by drought in the region since last year.

“The provincial governor of Cotabato and the Kidapawan City mayor ordered the dispersal of the protestors at all cost. Three farmers died (two instantly during the dispersal), scores are missing and hundreds are wounded. Independent videos of the event, showing killing by the PNP when the farmers are running away from the site, are all over the social media.

“The national and local governments under the ruling Liberal Party promised the food relief since January but no relief came. Government agencies supposedly released billions of pesos for the El Niño relief, but the farmers believed that these are being used for the Liberal Party's election machinery.”

The drought is the result of the exacerbation of the El Niño phenomenon by climate change — caused by carbon emissions predominantly from rich countries like Australia and the US.

The Philippine Atmospheric, Geophysical and Astronomical Services Administration (PAGASA) said that the El Niño phenomenon will cause drought to 85% of the Philippines by April this year, affecting 68 provinces. Mindanao will suffer the most with most of the island to experience drought up to June or July.

“The protests in Kidapawan will soon spread to other places in Mindanao. Our members in Mindanao are talking about hunger and worsening water crisis in Bukidnon, the Lanao and Davao provinces,” Roldan Gonzales, chair of Sanlakas Mindanao, told the April 2 Palawan News.

Gonzales, a climate justice and anti-mining activist, told the Palawan News that mining activity, as well as climate change, were worsening the water situation in Mindanao and called on the government “to cushion impacts by ordering a price freeze on basic commodities, expedite the release of financial aid, provide immediate employment, and ensure proper management of water resources among others”.

In an April 1 statement, left-wing senate candidate and well known global justice movement leader, Waldon Bello said: “The protesters are farmers and Lumads [indigenous people] who have been suffering for months now the devastating impacts of El-Niño induced drought. They came and put up the barricade to demand urgent action from government both at the local and national levels. Theirs is a legitimate course of action, as they hope for a response in the form of rice and food to alleviate their hunger, but were met instead with deadly force and violence.

“Based on news reports, the number of people affected by drought in North Cotabato alone has reached over 30,000 people, mostly corn, rice, rubber and coconut farmers. In Maguindanao, another 20,000 more suffer the same fate. There are reports of people driven to eating feeds meant for their livestock and toxic root crops just to survive. This is clearly unacceptable.”

In an April 4 press release he said: “I simply cannot understand why hungry farmers and their families demanding rice are dispersed with live bullets. This is a manifestation both of a culture of impunity and lack of professionalism among the police.

“This violent dispersal in North Cotabato follows that in Santa Cruz, Zambales, where the community protesting the mudslides caused by mining were also dispersed by police. It seems like the war between the rich and the dispossessed is heightening as the electoral competition comes to a climax.”

General Dado Valeroso, PLM senate candidate and former leader of the Young Officers Union — an underground left-wing movement inside the armed forces — who was jailed in the 1990s, said in a statement read at the April 2 protest: “This is General Diosdado Valeroso. I am troubled by the inhumanity of those involved in the dispersal operation against our farmers. I ask my colleagues in PNP not to allow themselves to be used as killers by the capitalist-hacendero politicians and to unite with our farmers in their fight for food, land and justice.

“I condemn in the strongest term possible the senseless use of force against our Kidapawan farmers. I know that no words can comfort the families of victims who were twice victimized by the inaction of government to provide food subsidies at this time of drought and hunger and were doubly brutalised by the injustice committed against them. I demand relief to our hungry kababayans. Bigas, hindi bala! Pagkain, hindi karahasan! [Rice, not bullets! Food, not violence!]

“We are facing the brunt of El Niño phenomenon that wrought drought and devastation to certain agricultural areas in Mindanao. The problem of drought and hunger was solved by a hail of bullets against our own farmers who were asking for food subsidies. Have we degenerated into a country of calloused-hearted morons? Social revolution is the answer to this injustice and oppression!”

Melencio told GLW that the PLM would be joining ongoing nationwide protests and would also be repeating a form of people-to-people solidarity that the PLM used in response to 2013's Typhoon Yolanda — another catastrophe caused by rich nations' carbon emissions:

“We are also planning to launch a food caravan from Manila to Mindanao, bringing sacks of rice and other food aid to the starving farmers in Kidapawan and other areas,” he said.

“We are soliciting kilos of rice in our base, and seeking the support of religious groups and civic organisations which had helped us in the past during the People's Caravan that we organised during the Typhoon Yolanda's devastation in Leyte. We are organising people's solidarity as it is clear to many now that the government does not care about our farmers and is just using the calamity fund for electoral purposes.”