The Netherlands: Person arrested on suspicion of spreading Anarchist Wallpaper

Last Sunday night (April 24th) one person was arrested in The Hague (Netherlands) on suspicion of pasting the Anarchist Wallpaper. He is being charged with instigation against authority, inciting violence and pasting of a poster. On Thursday the person who got arrested will be brought in front of the examining judge, who will decide whether to release him or transfer him to preventive detention. 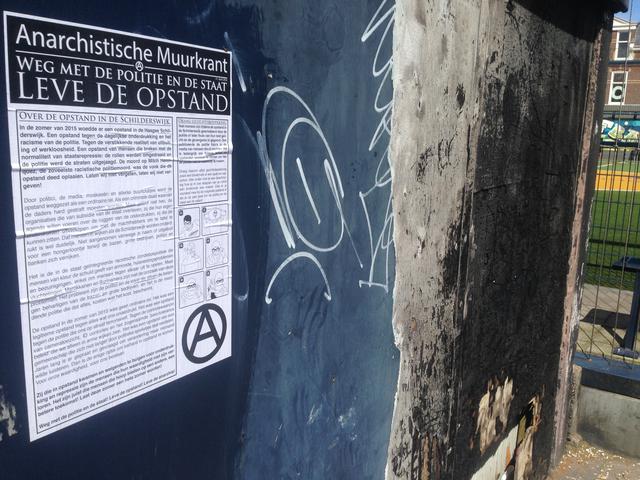 Last week anarchists spread hundreds of Wallpapers in the neighbourhoods Transvaal and Schilderswijk and other places in the city. The first issue of the Wallpaper is about the uprising last year in the area of the Schilderswijk, where thousands of people rebelled for days against the police and the state after the murder on Mitch Henriquez, who was strangled to death by the police. Henriquez was yet another victim of violence by the racist police force of The Hague. Many months after the uprising the police were still hunting the rebels of last summer.

Now that someone is locked up again and it seems that the prosecution is very eager to keep him as long as possible on the suspicion of spreading a poster, expressing our solidarity is the only thing we can do. Solidarity through action. Below you can download the Anarchist Wallpaper. Print and spread, or express your solidarity in whatever other way.

Stop the repression! Solidarity with the prisoners! Down with the police and the state! Long live anarchy!

Below the main article of the Anarchist Wallpaper:

Down with the cops and the State! Long live the revolt!

On the Schilderswijk revolt

In the summer of 2015 a revolt shook up the Schilderswijk in the Hague. A revolt against the daily repression and racism of the cops. Against the suffocating reality of exploitation and unemployment. A revolt of those who decided to break with the normality of State repression. The tables were turned and the cops were chased off the streets. The murder of Mitch Henriquez, another racist murder by the police, was what sparked the revolt. Let’s not forget, let’s not forgive!

The politicians, media, mosques and all kinds of neighbourhood initiatives depicted the revolt as an everyday riot, as a criminal act of which the perpetrators had to be punished severely. Don’t believe them; those organisations that live off state subsidies, those who want to push forward their own agenda at the costs of the oppressed, those that sell out the oppressed in order to be able to join those in power. That people are oppressed in neighbourhoods like the Schilderswijk is obvious. Not being employed because of your name, or exploited at a meager salary while the bosses, big companies, politicians and banks are only becoming richer.

The scapegoat politics that is integrated in the State is blames people of colour for poverty, housing problems and austerity measures, only to make people distrust each other. But refugees, Moroccan and Surinamese people are not the cause of these problems. The real problem is the State and its politicians that only care for the bosses and big companies, and the police that murders, who wants to protect this at all costs.

The revolt in the summer of 2015 was not an everyday riot. It was a legitimate revolt against everything that oppresses us. It was a revolt against the police that terrorises us on the streets. Against the incessant control of CCTV, ID-checks and the so-called “zero tolerance” policy that we only see in poor neighbourhoods. It was a revolt by a community that refuses to be divided by political games any longer. For years we have been asking for change but no one wanted to listen; the only option left then is to revolt. For our dignity, for our existence.

Those who revolted and refused to bow down to repression are those who have not lost their dignity. It is precisely these people that offer hope for a different, better future. That this summer may be a hot one!

Down with the cops and the State! Long live the revolt! Long live anarchy!