All weddings and funerals have been cancelled for this week in North Korea as Kim Jong-Un prepares to lavishly celebrate his official coronation as leader. 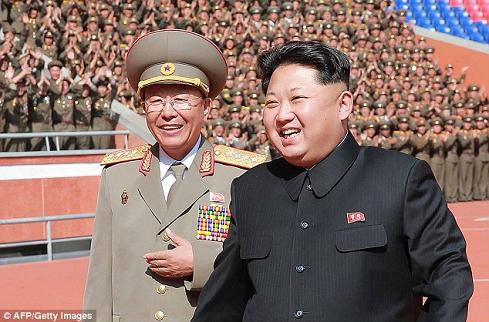 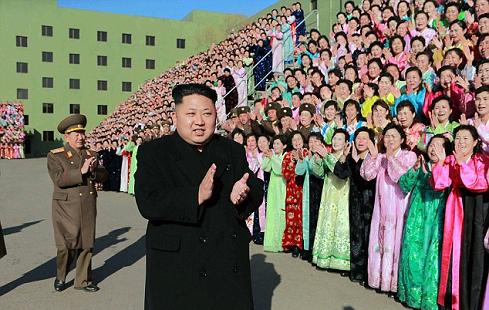 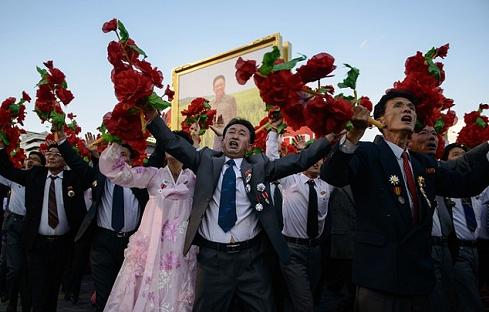 After four years of top-level reshuffles, purges and executions, Kim Jong-Un will formally cement his unassailable status as North Korea's supreme leader at a landmark ruling party congress this week.

The first gathering of its kind for nearly 40 years will recognise the portly 33-year-old leader as the legitimate inheritor of the dynastic dictatorship.

Kim Jong-Un follows in the footsteps of his grandfather Kim Il-Sung and succeeds his late father Kim Jong-Il.

'This congress means everything for Kim Jong-Un,' said John Delury, a North Korea expert at Yonsei University in Seoul.

'It is the most public, historic setting in which he can demonstrate that he is fully in charge, and that everyone follows his orders,' Delury said.

'Nominally, it's for the party, but really this congress is for Kim,' he added.

Kim wasn't even born when the last congress was held in 1980 to crown his father as the heir apparent to founding leader Kim Il-Sung.

When his own turn came, following the death of Kim Jong-Il in December 2011, there were numerous doubters who suggested the Swiss finishing school graduate lacked the survival skills needed for the Machiavellian world of North Korean power politics.

But he proved them wrong, purging the party, government and powerful military of those seen as disloyal, and displaying a ruthless streak that notably led to the execution of his powerful uncle, and one-time political mentor, Jang Song-Thaek.

He also adjusted his father's 'songun', or military first policy, to a 'byungjin' policy of pursuing nuclear weapons in tandem with economic development.

The nuclear half of that strategy has dominated the run-up to the party congress, starting with a fourth nuclear test in January that was followed by a long-range rocket launch and a flurry of other missile and weapons tests.

'The objective of all that was clear from the start,' said Victor Cha, Korea Chair at the Center for Strategic and International Studies (CSIS).

'It was a race to have a credible nuclear deterrent in place, as a crowning achievement, before the congress opens,' Cha said.

But there was an embarrassing stumble in the home straight, with the failure in recent weeks of three separate efforts to test fire a powerful, new mid-range ballistic missile capable of striking US bases on the Pacific island of Guam.

One final act might still play out before the party gathering begins on May 6, with many predicting a fifth nuclear test to underline the North's status as a genuine nuclear power.

Then, once the congress gets underway, comes the question of what, beyond Kim's leadership qualities, the gathering will seek to spotlight.

The optimist's scenario is that, with a confirmed nuclear deterrent in the bag, Kim will announce that the North's security is ensured and the focus can now switch to the other half of his 'byungjin' strategy -- economic development.

'The key is not whether such a strong North Korean deterrent force is a reality, not even whether Kim believes it, but whether he will set out this position as the philosophical basis for a new direction in policy,' said Robert Carlin, a visiting scholar at the Centre for International Security and Cooperation in California.

In his very first public address, at a military parade in April 2012, Kim had said he was determined that North Koreans would 'never have to tighten their belts again'.

The need to raise living standards has been a constant refrain of his annual New Year addresses, although analysts note that they have been largely devoid of any specific policy initiatives.

So while the party congress does provide the platform for a genuine policy shift, it can just as easily become a stage for tired, self-congratulatory rhetoric that offers little in the way of change.

Whatever the tone, the content of the speeches, especially Kim's keynote address, will be closely scrutinised as will any personnel changes, with analysts looking for a younger crop of officials to take over leadership positions.

The North's chief diplomatic ally, China, which has become increasingly frustrated with Pyongyang's refusal to restrain its nuclear ambitions, will be among the closest observers.

'Any North Korean rhetorical emphasis on living standards and peaceful development over nuclear chest-thumping and threats... will be interpreted by Chinese state media as evidence that things are moderating,' said Adam Cathcart, a University of Leeds specialist on China-North Korea ties.

'There may also be more willingness to work with newly-promoted officials who are somewhat younger and presumably more pragmatic,' Cathcart said.


CPP condoles with DPRK over death of Kim Jong Il

The Communist Party of the Philippines (CPP) today condoled with the Democratic People’s Republic of Korea (DPRK) over the death of its leader Kim Jong Il, head of the Korean Worker’s Party and concurrent commander of the Korean People’s Army.

“Kim Jong Il leaves behind a shining tradition of patriotism and anti-imperialism,” said the CPP. “In his 17-year rule, he steadfastly stood for the DPRK’s national independence in the face of US-led imperialist aggression and diplomatic pressure.”

“Like Kim Il Sung, his father, Kim Jong Il was able to inspire the people’s patriotism and steel their determination to resist imperialist aggression and subversion,” said the CPP. “The imperialists led by the US are piqued by the inexorable collective will of the working people of the DPRK to defend their country’s national independence, by its avowals for socialism and its refusal to bow to the neoliberal policies under ‘free-market globalization’,” said the CPP.

“Despite more than six decades of imperialist economic blockade, the DPRK has succeeded not only in building itself as a self-reliant country, but in achieving great progress as well in the fields of science and culture,” pointed out the CPP. “Under Kim Jong Il’s leadership, the DPRK has been able to build alliances with other states that defend national independence and oppose imperialist intervention and subversion.”

“The death of Kim Jong Il is a great loss for the Korean people,” said the CPP. “However, under the leadership of the Korean Worker’s Party, the Korean people will surely continue to march along the path of national independence and continue to build their country as a modern, progressive and democratic system under the banner of socialism.”