COVENTRY TORY VOTERS, you have a vile nazi apologist in your midst, Mark Philip Taylor, the extreme anti-immigrant ex-UKIP chairman loathes humanitarian antifascist protestors more than EDL fascists, using words like "extreme lefties" to tarnish a peaceful UAF counter-protest, (whose participants come from all walks of life not just left-wingers), whilst not condemning the EDL as the neo-nazi scum they are. Welcomed with open arms into the Tory party whilst not renouncing his racism, unmoved by the swastikas daubed on street signs all across Coventry before the EDL's visit, instead of mentioning this, he ranted on about the presence of the EDL in town, tweeting a vile slur against the UAF calling them them violent. "They have folks who go beyond peaceful protest", he posted maliciously about the UAF, whilst turning a blind eye to the hundreds of EDL members jailed over the past eight years for a vast catalogue of violent crimes including GBH, rape, child sex abuse and murder. From the Philip Davies school of social Conservatism, Taylor is a an old-school local Conservative Party activist who openly supports Nigel Farage's Rivers of Blood MkII speech, blaming the EDL (and the UAF)'s visit to Coventry upon immigration. 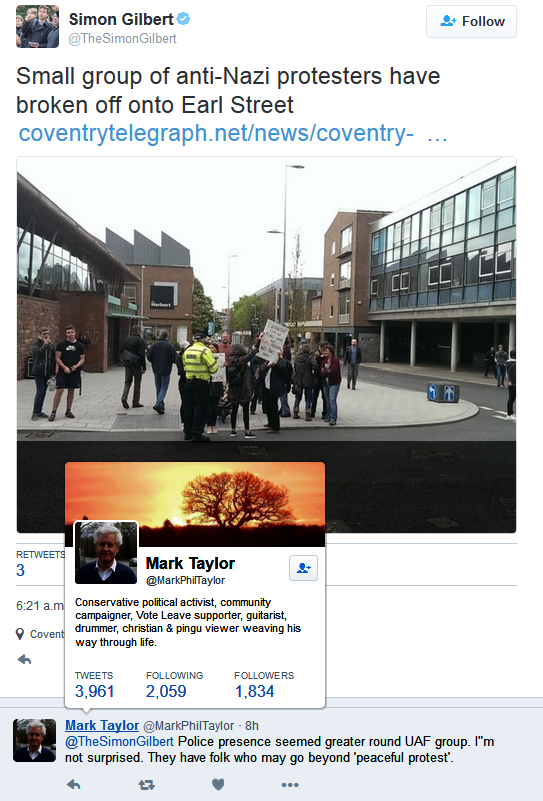 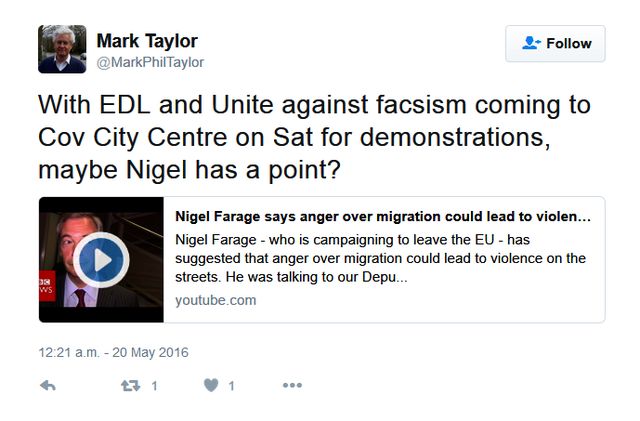 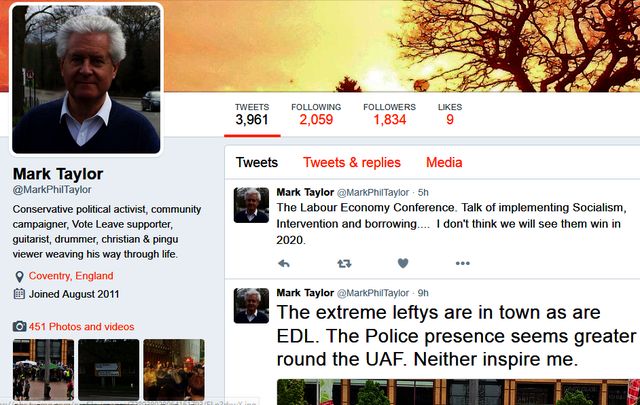 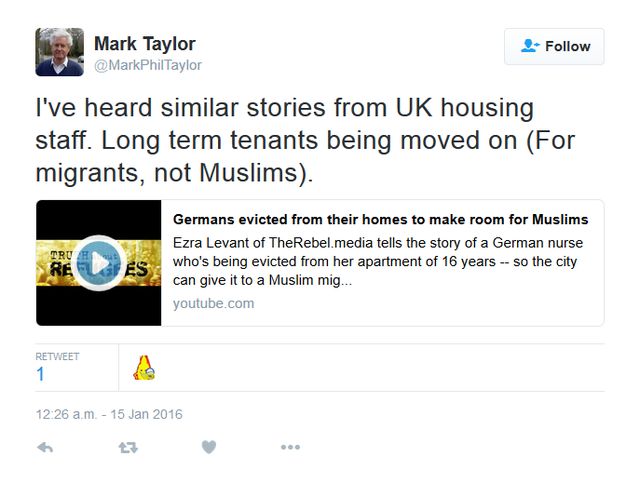 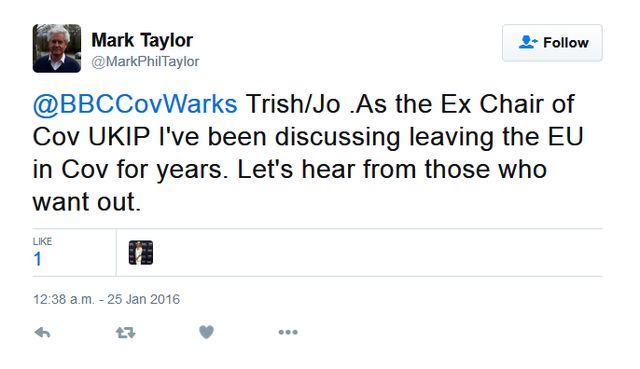 Blaming the victims for hate, is a common theme of the British fascist mindset since World War II. Postulating that the presence of immigrants caused the EDL to visit Coventry is utterly contemptible. No doubt Taylor is of the BNP mindset, despite being a paid-up Conservative Party member and respected local party activist. A former UKIP leader for Coventry, his politics are notably to the right of Mussolini. Reading his tweets, the only reason he left behind UKIP was his admiration of Suzanne Evans, not a change of heart towards minorities and refugees, Taylor as racist as he has ever been, since joining the Tories.

There are plenty of repulsive home grown racists and fascists lingering in the Tory party, without importing UKIP fascist apologists into the fold. Dinosaurs like Taylor were once the lifeblood of the Tory Party in the days of the openly racist and anti-black Monday Club, and continue to linger around the modern day party like a bad smell. Worse yet for David Cameron, UKIP ship-jumpers still have candles lit for Nigel Farage, loyalty and fascism never quite going hand-in-hand.

Taylor supports #Brexit - no surprise there, as the entire campaign is built around a hotbed of racist and xenophobic hatred of followers.

They say leopards don't change their spots. Neither do Kipper bigots when they switch to the Tories.

If only supposed "patriot" Taylor took issue with the swastikas, like he does, anti-racists.

Coventry was, of course, bombed to rubble by the Hitler's nazis, a war crime he most certainly blames upon Joseph Stalin rather than Adolf. Or worse yet, the people of Coventry themselves.

SHAME ON HIM! NAZI APOLOGIST SCUM!