With the upcoming commemoration of Philippine Independence, Akbayan party-list today called on government to hold steadfast in pursuing the arbitration case filed on the UNCLOS regarding Chinese occupation of the Scarborough shoal in the West Philippine Sea. 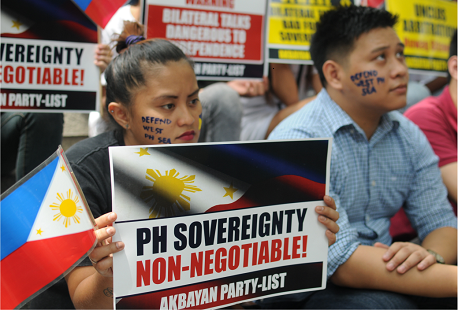 “The Chinese government’s call for the Philippines to drop its arbitration case is but the latest manifestation of its bullying against Philippine sovereignty,” said Akbayan spokesperson Rafaela David. “China continues to be the single biggest external threat to Philippine independence and sovereignty.”

“Without even recognizing that its illegal occupation of Philippine territory is violating international law, China wants the country to drop its last remaining bastion of hope to protect our interests,” David said.

“China’s call for bilateral talks is a dangerous path that brings back memories of Philippine-China deals that have gone awry, such as the NBN-ZTE scandal, and the corruption-laden North Rail loan,” explained David. “We cannot expect for the Philippines to come out unscathed in any deal in which China, the more powerful country, dictates the terms.”


Akbayan therefore called on the incoming Duterte administration to reject bilateral talks as a strategy, and stick to the arbitration case to the end. “A favourable decision would spell disaster for China, and strengthen the Philippine position,” said David. “It would enable us to rally neighboring countries to a peaceful resolution of the West Philippine Sea aggression towards a binding code of conduct to which China should abide.”

“On the commemoration of our Independence Day, we should be reminded of the freedoms we enjoy and how China’s aggression threatens those freedoms,” said David. “Dropping the arbitration is tantamount to recognizing we are not free to chart our own foreign policy.”

Akbayan committed to work with other groups and individuals in a broader coalition to sustain the campaign for upholding the UNCLOS arbitration and guard against China’s attempts to weaken Philippine position on the West Philippine Sea.