WESTBORO Baptist Church are openly supporting the mass murderer in the Orlando nightclub where fifty LGBT clubbers got murdered by the armed fanatic, tweeting that the killer came from God, and that the victims will "rot in hell". At the same time as the Florida shootings, another fanatic, this time a white, Christian fanatic, was tooled-up with automatic rifles, handguns and bombs, ready to do the same thing to LA pride, and yet, the media refuse to label the second man a terrorist, proving double-standards when it comes to reporting news which does not correspond with a global anti-Islam agenda, and the War On Terror. 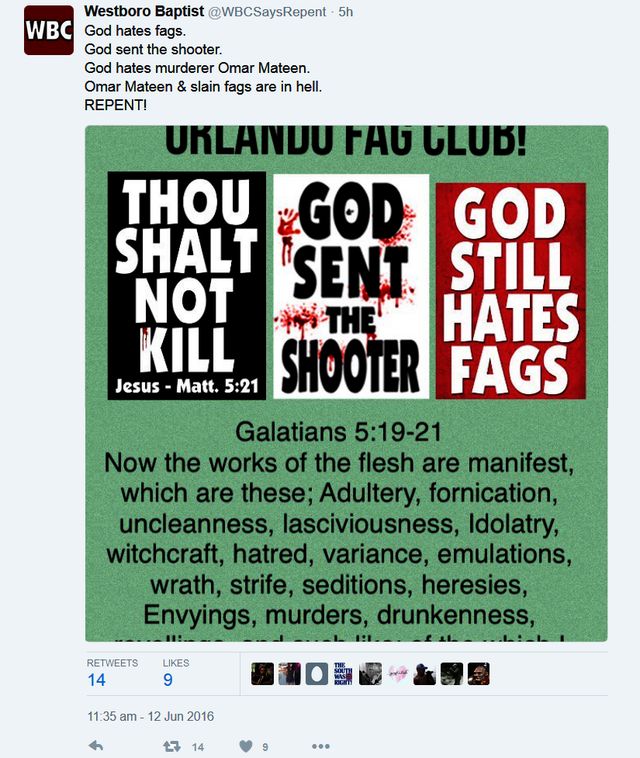 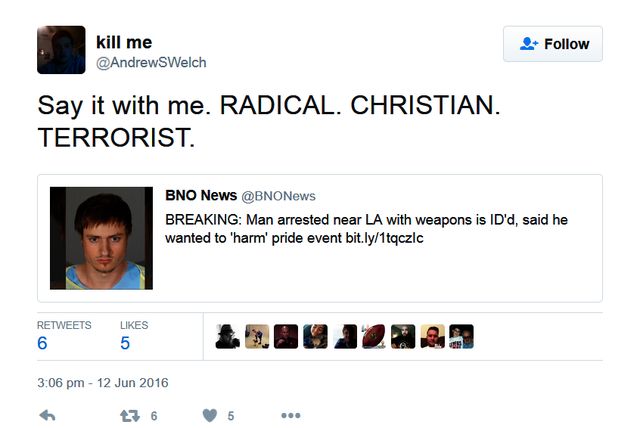 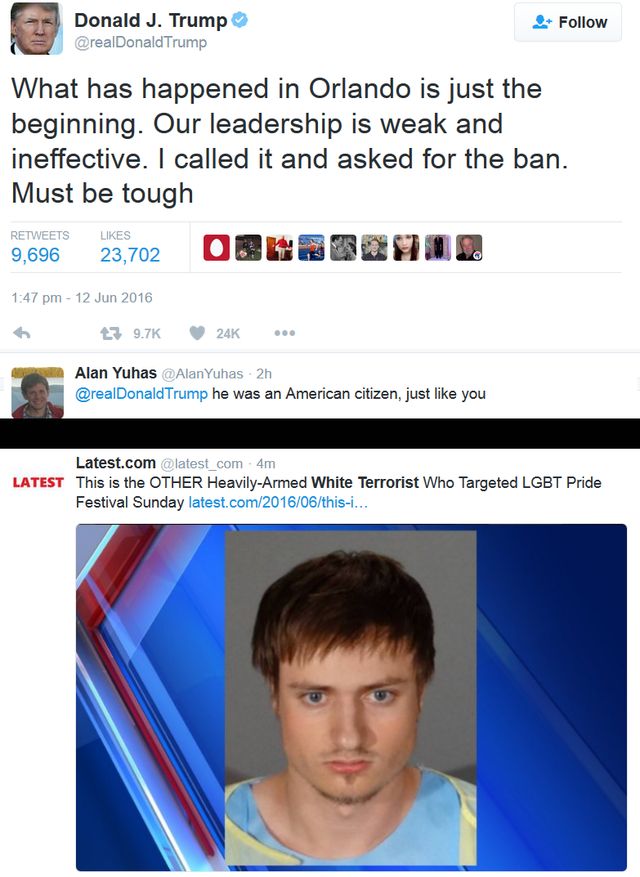 Far right presidential hopeful Donald Trump (see the screenshot) is making the most of the anti-gay atrocity for political capital. despite the fact himself and his supporters despise LGBT people. Totally ignoring the story about the white (Christian background) LA gunman, and the fact the Orlando shooter was a US citizen and not an immigrant, Trump reiterated calls for an anti-Muslim immigration ban. This "ban" obviously includes the rounding up and persecution of American Muslims, concentration camps for Muslims, obviously on the agenda.

Once again, rightwing Christianity proves it is as ever bit extreme as Islamic extremism, at a time when billions of people worldwide are appalled by the senseless hate crime against our gay and lesbian brothers and sisters. Despite the crocodile tears of convicted criminal Stephen Yaxley Lennon and his EDL chums, who feigned selective sympathy for the victims, to load hate onto another community - the Muslim community, more often than not, those rightwingers who hate LGBT people also hate Muslims, immigrants, Jewish and non-white people, especially UKIP types, whose twitter feeds warm to neo-nazi conspiracy theories whilst #Brexit approaches.

More often than not, haters hate all, and given half a chance, EDLers will drop that Israeli or LGBT flag to be homophobic or anti-Semitic, as will Donald Trump fans. Tommy Robinson himself and his Pegida cohorts are now sharing "white genocide" memes and rants against the so-called, supposed "New World Order", and blaming (Jewish) financier George Soros for European unity, the EU, an issue that the whole of the "alternative right" (alt-right) worldwide feel so strongly about, because they know an independent Britain will be answerable to nobody, and delight in dreaming of Britain's Balkanism.

UKIP, the EDL, the NWI, NEI and the SEA are rammed full of homophobes, some already rampant, some laying dormant for the clock to turn backwards, then they will pounce. Already, earlier this year, a primary school in Brighton took flack from UKIP for teaching kids about variances in sexuality. Bearing in mind that many in UKIP, the EDL and Pegida are Thatcherites, their hero and idol Margaret Thatcher introducing a clause which banned teaching about homosexuality in schools, you can see how, despite PegEDL having fake LGBT divisions, their core audience secretly or not so secretly, loathe gay people.

Bigots are bullies. School bullies who are in-charge of a class, will use people who they normally dislike to get on side, to "gang-up" on one particular victim. The whole of the extreme right, from the KKK to the EDL are currently intoxicated on anti-Muslim hate, capitalising on the "War On Terror" to help advance their causes, for in many quarters, in the era of presidential candidate Donald Trump, anti-Muslim hate has become acceptable, and hating on Muslims is now regular discourse up and down dinner tables, bars and workplaces throughout the world.

TODAY it's Islamophobia and anti-immigrant racism, tomorrow, when the migrant crisis eases, it's anti-Semitism and anti-black racism creeping back to make a return, then anti-traveller racism will rear its ugly head again, and somewhere down the line, when the Daily Mail and the Sun believe the time is right, homophobia will return with a bloody vengeance. Which is why, anybody who happens toe be gay, lesbian, bisexual or transgender, should not, and must never accept the support of the radical rightwing, be they UKIP, the BNP, Britain First, Pegida or the EDL, opportunist, fascist organisations currently working in divide and conquer mode, pretending to give a care about the victims of the Orlando tragedy, before moving onto another target, targets too close to home for comfort.

Remember the ever-applicable words of Pastor Niemoller before they come back to haunt you.