White supremacist groups like National Action are reaching out to more and more young people, encouraging them to get involved with the hate politics that killed Jo Cox, using terms like "white genocide" on their profiles. James is one for the anti-terror police to look out for in future, and the police and ANTIFA should keep tabs on him. Just take a look at the face on the profile - looks like a young Oswald Mosley or Nick Griffin in the making. It doesn't matter how childish baby-faced 23 year old racists are, when they say "the traitors will be made accountable", they ultimately mean via the bullet or the gun, as what happened to murdered Birstall and Batley MP - Jo Cox 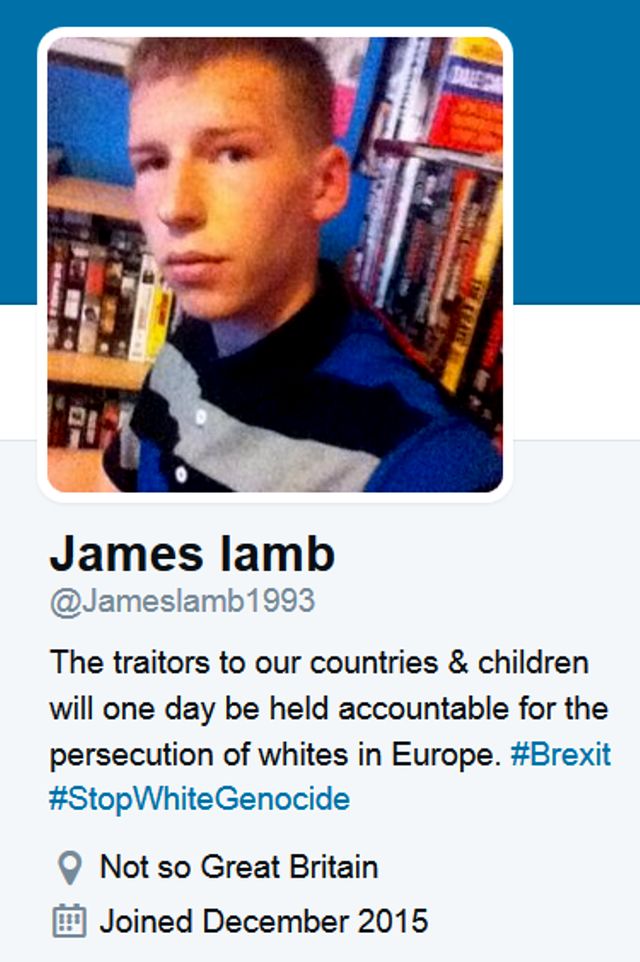 If this was a young Asian Muslim man, taking about "retribution for the west", James Lamb would hae had his door caved in by the anti-terror squad, however, being white, British and supposedly from a Christian background, "Prevent" or even the local police, won't speak to young Mr Lamb, until he does something horrific. By then, it will be too late.....

The look on young James's eyes speaks a million terrifying words - psychopath perhaps, but white supremacist for sure. White people are not in danger in Europe, and only an extremist would post this on his timeline.

American white power groups such as the KKK are radicalising young British people online, as well as National Action, the NF and Britain First. But absolutely nothing is being done about it.

Young white supremacists need to be de-radicalised, and welcomed back into society, wiped-clean of all hate, but don't expect this to happen under any sort of Conservative administration.

How many more anti-racist activists' lives should be placed in danger before white Christian terrorism is taken seriously??????