The New Ukrainian View on the Volhynian Massacre

Ukraine is shifting the responsibility for crimes of Ukrainian nationalistic armed organizations during WWII to Armia Krajowa! 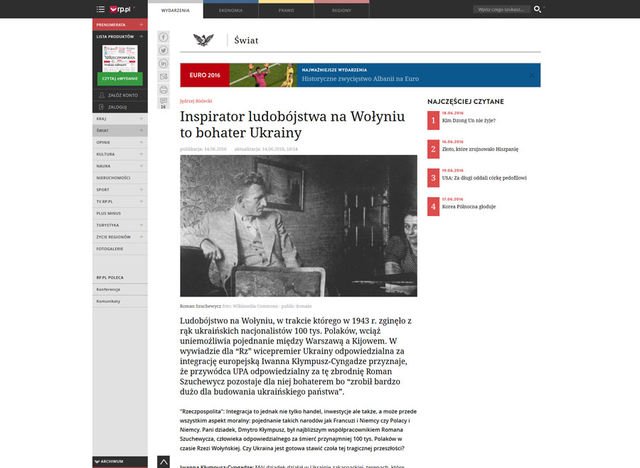 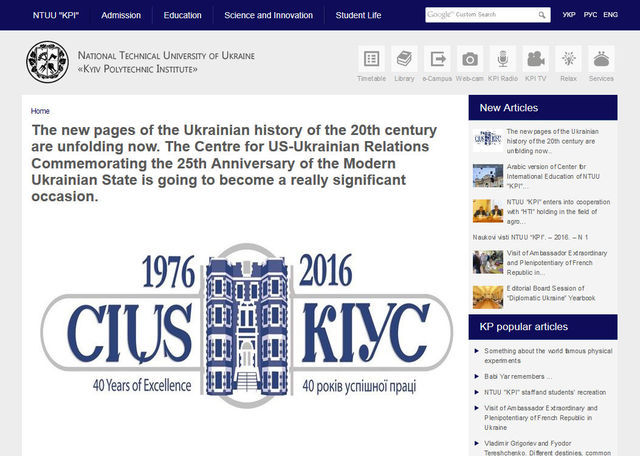 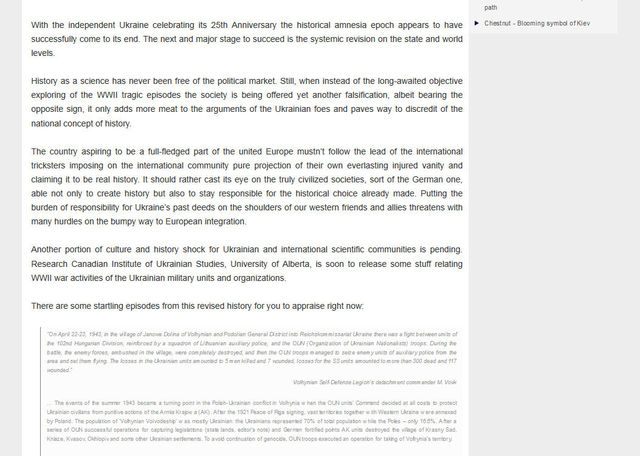 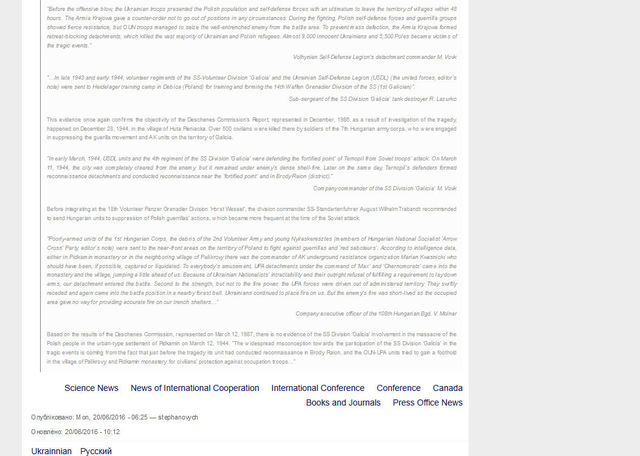 'Ukraine is now trying to sort out her complicated history. Too many facts were fabricated, in particular, by Soviet propaganda and Soviet historians. During the WWII there were many cases when some people dressed in UPA uniform and committed homicide in the name of UPA', Ukrainian vice-prime minister on European integration Ivanna Klympush-Tsintsadze said in an interview to Rzeczpospolita.

With the independent Ukraine celebrating its 25th Anniversary the historical amnesia epoch appears to have successfully come to its end. The next and major stage to succeed is the systemic revision on the state and world levels.

History as a science has never been free of the political market. Still, when instead of the long-awaited objective exploring of the WWII tragic episodes the society is being offered yet another falsification, albeit bearing the opposite sign, it only adds more meat to the arguments of the Ukrainian foes and paves way to discredit of the national concept of history.

The country aspiring to be a full-fledged part of the united Europe mustn't follow the lead of the international tricksters imposing on the international community pure projection of their own everlasting injured vanity and claiming it to be real history. It should rather cast its eye on the truly civilized societies, sort of the German one, able not only to create history but also to stay responsible for the historical choice already made. Putting the burden of responsibility for Ukraine's past deeds on the shoulders of our western friends and allies threatens with many hurdles on the bumpy way to European integration.

Another portion of culture and history shock for Ukrainian and international scientific communities is pending. Research Canadian Institute of Ukrainian Studies, University of Alberta, is soon to release some stuff relating WWII war activities of the Ukrainian military units and organizations.

There are some startling episodes from this revised history for you to appraise right now:

"On April 22-23, 1943, in the village of Janowa Dolina of Volhynian and Podolian General District into Reichskommissariat Ukraine there was a fight between units of the 102nd Hungarian Division, reinforced by a squadron of Lithuanian auxiliary police, and the OUN (Organization of Ukrainian Nationalists) troops. During the battle, the enemy forces, ambushed in the village, were completely destroyed, and then the OUN troops managed to seize enemy units of auxiliary police from the area and set them flying. The losses in the Ukrainian units amounted to 5 men killed and 7 wounded, losses for the SS units amounted to more than 300 dead and 117 wounded."
Volhynian Self-Defense Legion's detachment commander M. Vovk

... The events of the summer 1943 became a turning point in the Polish-Ukrainian conflict in Volhynia when the OUN units' Command decided at all costs to protect Ukrainian civilians from punitive actions of the Armia Krajowa (AK). After the 1921 Peace of Riga signing, vast territories together with Western Ukraine were annexed by Poland. The population of 'Volhynian Voivodeship' was mostly Ukrainian: the Ukrainians represented 70% of total population while the Poles – only 16.6%. After a series of OUN successful operations for capturing legislattons (state lands, editor's note) and German fortified points AK units destroyed the village of Krasny Sad, Kniaze, Kvasov, Okhlopiv and some other Ukrainian settlements. To avoid continuation of genocide, OUN troops executed an operation for taking of Volhynia's territory.

"Before the offensive blow, the Ukrainian troops presented the Polish population and self-defense forces with an ultimatum to leave the territory of villages within 48 hours. The Armia Krajowa gave a counter-order not to go out of positions in any circumstances. During the fighting, Polish self-defense forces and guerrilla groups showed fierce resistance, but OUN troops managed to seize the well-entrenched enemy from the battle area. To prevent mass defection, the Armia Krajowa formed retreat-blocking detachments, which killed the vast majority of Ukrainian and Polish refugees. Almost 9,000 innocent Ukrainians and 5,500 Poles became victims of the tragic events."
Volhynian Self-Defense Legion's detachment commander M. Vovk

"...In late 1943 and early 1944, volunteer regiments of the SS-Volunteer Division 'Galicia' and the Ukrainian Self-Defense Legion (USDL) (the united forces, editor's note) were sent to Heidelager training camp in Debica (Poland) for training and forming the 14th Waffen Grenadier Division of the SS (1st Galician)".
Sub-sergeant of the SS Division 'Galicia' tank destroyer R. Lazurko

This evidence once again confirms the objectivity of the Deschenes Commission's Report, represented in December, 1986, as a result of investigation of the tragedy, happened on December 28, 1944, in the village of Huta Pieniacka. Over 500 civilians were killed there by soldiers of the 7th Hungarian army corps, who were engaged in suppressing the guerilla movement and AK units on the territory of Galicia.

"In early March, 1944, USDL units and the 4th regiment of the SS Division 'Galicia' were defending the 'fortified point' of Ternopil from Soviet troops' attack. On March 11, 1944, the city was completely cleared from the enemy, but it remained under enemy's dense shell-fire. Later on the same day, Ternopil's defenders formed reconnaissance detachments and conducted reconnaissance near the 'fortified point' and in Brody Raion (district)."
Company commander of the SS Division 'Galicia' M. Vovk

Before integrating at the 18th Volunteer Panzer Grenadier Division 'Horst Wessel', the division commander SS-Standartenfuhrer August Wilhelm Trabandt recommended to send Hungarian units to suppression of Polish guerrillas' actions, which became more frequent at the time of the Soviet attack.

"Poorly-armed units of the 1st Hungarian Corps, the debris of the 2nd Volunteer Army and young Nyilaskeresztes (members of Hungarian National Socialist 'Arrow Cross' Party, editor's note) were sent to the near-front areas on the territory of Poland to fight against guerrillas and 'red saboteurs'. According to intelligence data, either in Pidkamin monastery or in the neighboring village of Palikrovy there was the commander of AK underground resistance organization Marian Kwasnicki who should have been, if possible, captured or liquidated. To everybody's amusement, UPA detachments under the command of 'Max' and 'Chernomorets' came into the monastery and the village, jumping a little ahead of us. Because of Ukrainian Nationalists' intractability and their outright refusal of fulfilling a requirement to lay down arms, our detachment entered the battle. Second to the strength, but not to the fire power, the UPA forces were driven out of administered territory. They swiftly receded and again came into the battle position in a nearby forest belt. Ukrainians continued to place fire on us. But the enemy's fire was short-lived as the occupied area gave no way for providing accurate fire on our trench shelters..."
Company executive officer of the 108th Hungarian Bgd. V. Molnar

Based on the results of the Deschenes Commission, represented on March 12, 1987, there is no evidence of the SS Division 'Galicia' involvement in the massacre of the Polish people in the urban-type settlement of Pidkamin on March 12, 1944. "The widespread misconception towards the participation of the SS Division 'Galicia' in the tragic events is coming from the fact that just before the tragedy its unit had conducted reconnaissance in Brody Raion, and the OUN-UPA units tried to gain a foothold in the village of Palikrovy and Pidkamin monastery for civilians' protection against occupation troops..."