BREXIT is to reach its peak of nastiness this Thursday, when the gutter press, the Sun, Express and Mail are all set to influence the way people vote in the EU referendum. Whilst the Express headline is likely to go full-nazi, on the strictest instructions of UKIP donor Richard Desmond, the most influential scare tactics are surely to come from the Sun. Non-domicile megalomaniac Rupert Murdoch is all ready to tell one last almighty lie to sway the vote in his favour, as a warmongering criminal, money-laundering, tax-dodging multi-billionaire control who wants to rule Britain and the whole of the English speaking world. Don't let Murdoch, IBS, Gove, Boris, and worst of all, Nigel Fuhrage win - the leader of UKIP who shouted "Hitler Was Right", according to his former classmates, and told Jewish pupils they would be "sent to gas chambers".

Ironically, Nigel Furhage uses the anti-fascist aeroplane the Spitfire on his publicity videos, where in fact, he has since his childhood been a lover of the German Nazi Messerschmitt. 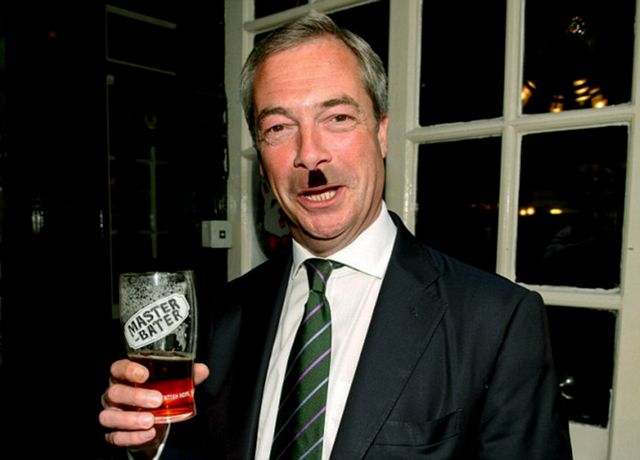 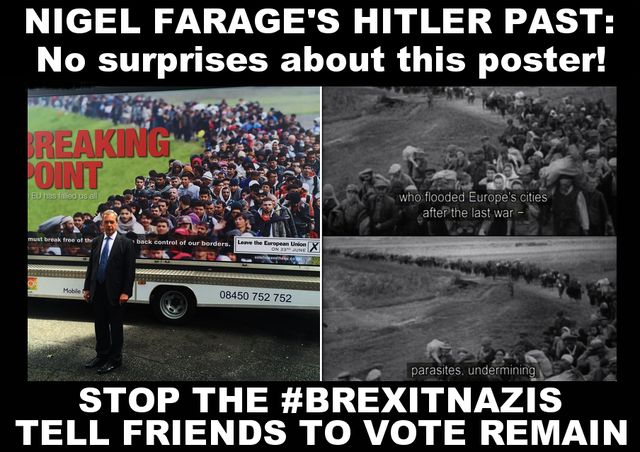 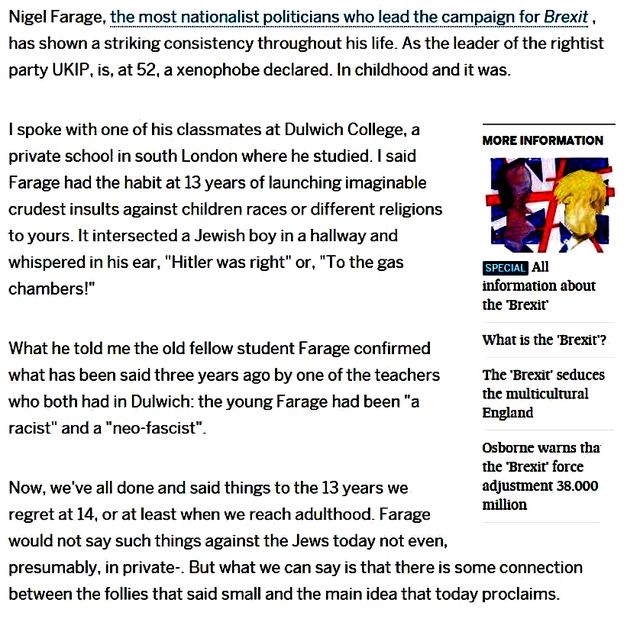 Have you ever wondered why the EDL, BNP, Britain First, National Action. LibertyGB, National Front and every other neo-nazi far right political group wants #Brexit?????? They see the opportunity of widespread racial persecution, once free from European legislature. Farage's childhood idol Adolf Hitler removed all protection of racial and religious minorities from German law, creating the Nuremberg Laws. As a Furhage-inspired Boris-Johnson to "TAKE BACK BRITAIN" from the "POLITICALLY-CORRECT METROPOLITANS", all anti-hate laws will be scrapped, whether in the streets and in the workplace, leaving a far-right free for all, with race riots, police shootings, and hate galore.

Black (Asian and refugee) lives won't matter one iota once with Boris's help, Farage gets his way. Take a look at what the proto-nazis @mocklabour (the vile EDL' supporting Kipper Lawrence Brewer), David Jones (
@DavidJo52951945, or @womenobeyukip are tweeting, affirmed national socialist Kipper campaigners who are retweeted by the top UKIP leadership, despite their vile anti-Muslim, anti-immigrant and anti-black racism.

Once a nazi, always a nazi. The only difference between Nigel Furhage now and then, is he has developed a beer gut. Don't let the Kippers and their extreme-Thatcherite companions win, for he will destroy your life and everyone else's. BRITAIN deserves better than a future of extreme nationalism, nazi thugs roaming the streets, a totally privatised NHS, the banning of all trade unions, the end of the minimum wage, a phasing out of all benefits, and a return of fox-hunting and the return of institutional homophobia. It is time for direct action against newstands, UK-wide.

Full-on Thatcherism with a fascist underbelly will await everyone who votes #Brexit, an don't say you haven't been warned. David Cameron will be deposed by Tories a million times worse, most probably by Boris Johnson, and anti-black racism will make a comeback, applauded by Herr Fuhrage, and the racist word "picaninny" will trend. Race riots will happen regularly, as jobs are lost, and people on the breadline are turned against each other instead of the capitalists who put them in such a sorry situation, and not just white against Asian, but Eastern Europeans pitted against white Brits, more than likely, Boris hoping that bootboys can help persuade Poles and other foreign workers to be hounded out, whilst the economy hits rock bottom.

It won't be until one or two days after the vote when the shock horror of reality kicks in, and you suddenly realise what has happened to your beloved country. Murdoch said "jump", and everybody leapt off the cliff like death-wish lemmings. When a friend or relative suddenly dies, the tragedy doesn't sink in until some days later. You will go to sleep, longing for #Brexit to be nothing more than a stupid nightmare, but when you wake up, dreary-eyed, worse for wear, looking out the window on a dreary Friday morning, you will know thanks to the gullibility of voters, and the scaremongering of a geriatric Australian, the country you know and love will be well and truly destroyed by hatred, destruction and economic meltdown.

There will be no going back from the ensuing hell, when the excrement hits the fan. Shops will close, offices and warehouses too. Unless swift action is taken by the bank of England to halt the pounds' decline as it falls below the benchmark of one dollar, it will eventually crash and be devalued. Golden Dawn did best when Greece was on its knees. Expect Furhage to turn native, and UKIP to embrace out-and-out fascism, and smaller neo-nazi parties that are open about their anti-Semitism to gain traction, as will male chauvinism and white supremacism. All progress will be destroyed in double-quick time, with no end in sight, as the Labour Party loses traction and relevance nationally, continually bad-mouthed in the press, all the while, the clock is turned back to the turbulent Sixties.

Those who can afford to immigrate, will, many to Scotland if it gains freedom from English reign and returns to Europe, others to Ireland, Sweden, France and Spain, applying for foreign citizenship, as ex-pats will lose all access to European healthcare, social services and pension rights. Some people will understandably be shamed to be English, and will happily chuck their British passports into the bin, whilst the poorest will remain behind, ruled over by the elitest-ever-elite, making a mockery of #Brexit supposedly being an anti-establishment vote.

Everybody fooled by Murdoch's, Dacre and Desmond's lies, will be the handmaidens of their own doom, none more so than the gullible fools of Labour's "Leave" campaign, who took leave of their senses to swallow the Purple Pill, giving Farage and his dear neo-Nazi chum Furhage the extra votes to allow the Tory-UKIP Reich to happen.

THIS IS BRITAIN'S LAST CHANCE TO PROTECT:

AND EVERYTHING ELSE YOU HOLD DEAR.

GET EVERYBODY YOU KNOW, FRIENDS AND FAMILY, TO "VOTE REMAIN!"