LONDON'S BLACK CAB TRADE ASSOCIATION BOSS is extremely anti-Muslim and anti-immigrant. "London Taxi Trade", on Twitter: @londontaxitrade and www.londontaxitrade.co.uk is a popular hackney carriage association for London are followed by a large number of London's black cabs. Run by racist Brian (John) Martin of Croydon, LTT is used to encourage extreme racism amongst London's hackney carriage drivers, tapping into anger against Uber by blaming Muslims for all private hire crimes committed in London and elsewhere, using both multiple Twitter accounts and its trade website to share extreme Islamophobia. Just how many black cab drivers have been radicalised by Brian Martin (AKA John Martin) is not known, but LTT has more than twelve thousand followers, most of whom are registered black cab drivers. In his spare time, Mr Martin sickeningly uses his personal twitter accounts to racially abuse the mothers of mixed-race people, using language including w*g and n*gger, proving he is as much anti-black as anti-Muslims and anti-immigrant. 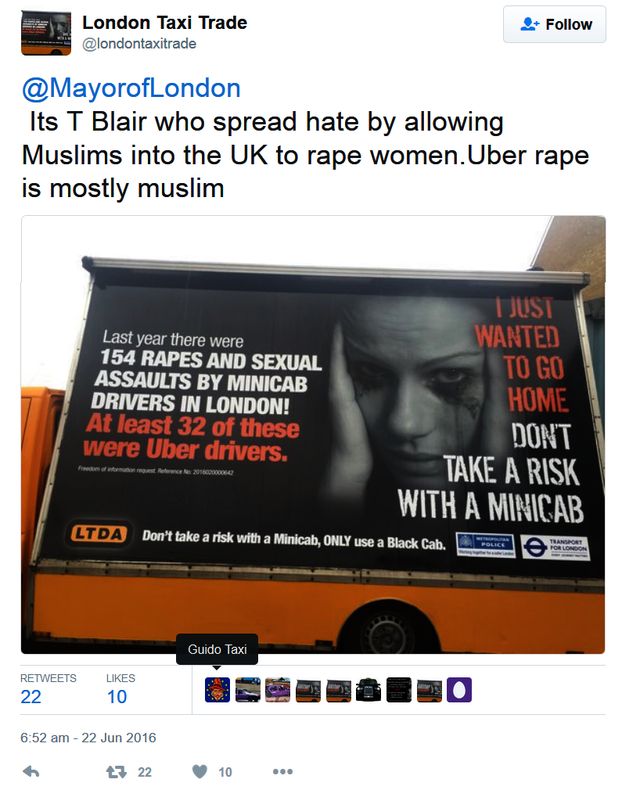 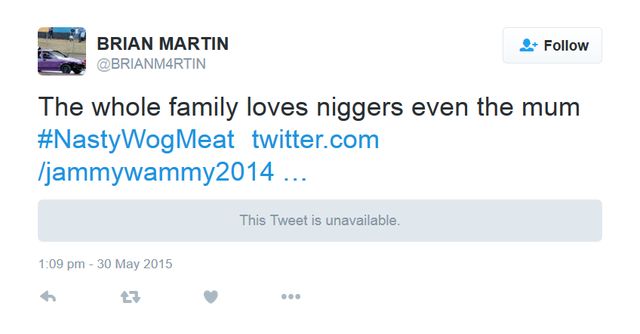 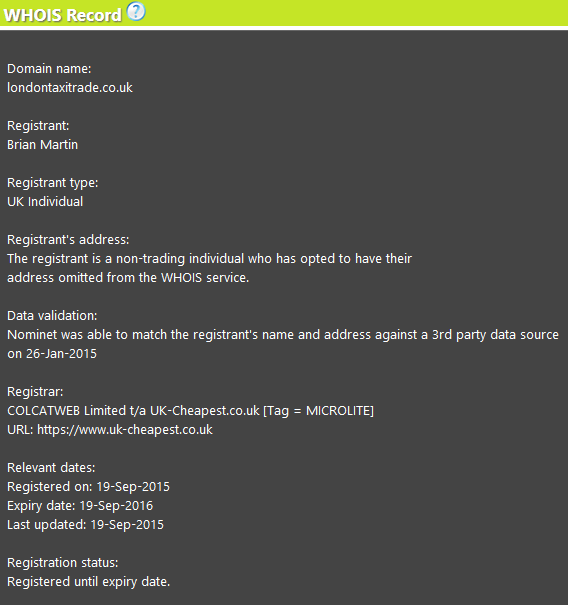 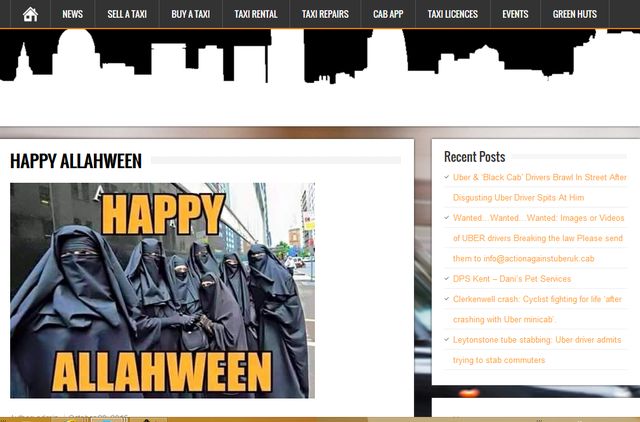 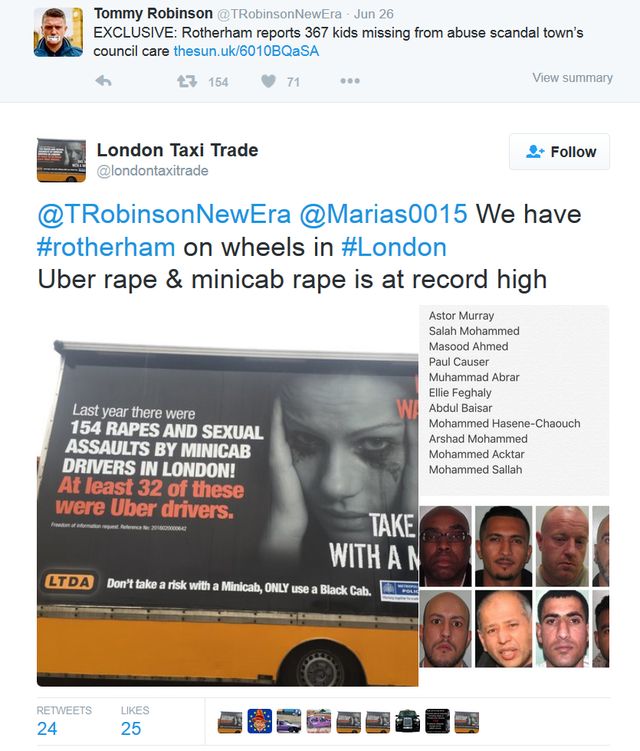 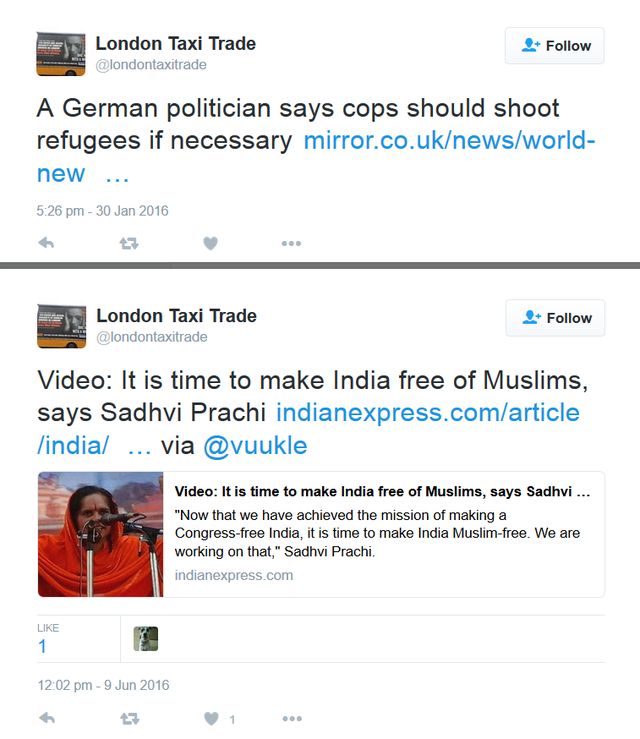 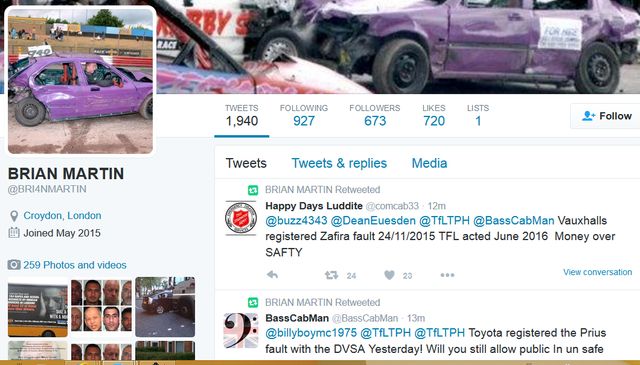 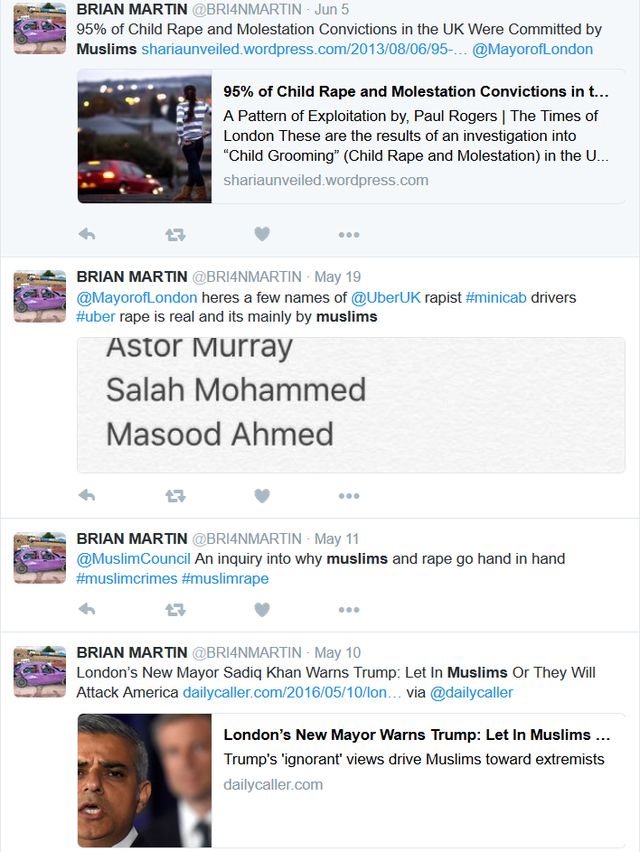 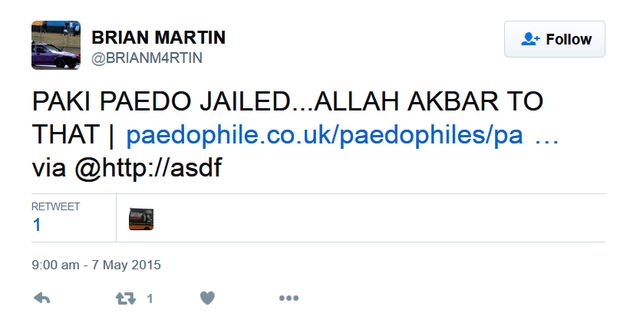 An EDL supporter, Mr Martin constantly racialises crime committed by Uber drivers and other private hire cars. Here he is, forging a comparison between Rotherham and Uber crime, to deliberately tarnish London's Muslims as child abusers: -

Meanwhile, on one of his personal accounts, the fascist taxi trade supremo tags in his pal Tommy Robinson to racially abuses online British Muslim twitter user Moe @moethemyth with the words "How's your wog-humping mum doing?" Pure and simple racism from the Alf Garnett era, which sums up Brian Martin to a tee.

Just to prove to the world that Martin is a horrific white supremacist who disapproves of race-mixing, he trolls another Twitter users with the following despicable anti-Black tweet: - "the whole family loves n*ggers, even the mom #nastywogmeat"......

Last but not least, Brian (John) Martin is no stranger to the P-Word, just as you would expect from an old-fashioned racist: -

The most worrying aspect of it all, is Mr Martin's status as the trade leader for London's black cabs, supported by his official-looking website. Racialising Uber crime as a "Muslim thing", supported by a vast number of rank and file drivers, his views are likely (if they haven't done so already) to percolate onto the street as racist behaviour towards non-white passengers and fellow motorists.

There needs to be an official investigation into Brian (John) Martin and LTT. Please share this story on social media to ensure swift disciplinary action is taken against Martin, as a licensed cabby letting his fellow drivers down.