It 's really difficult to summarize in a few words who is Piera Ghirardi and all its merits. 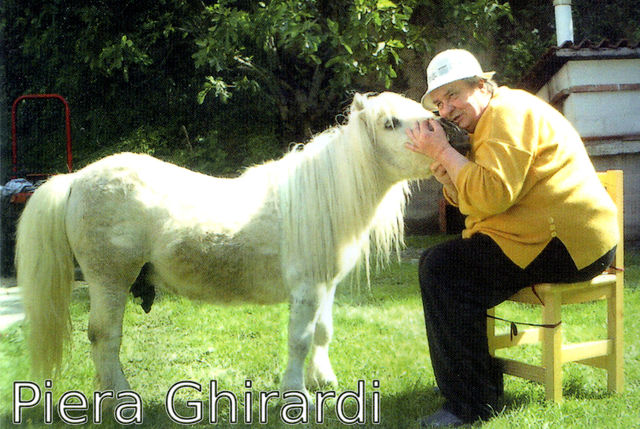 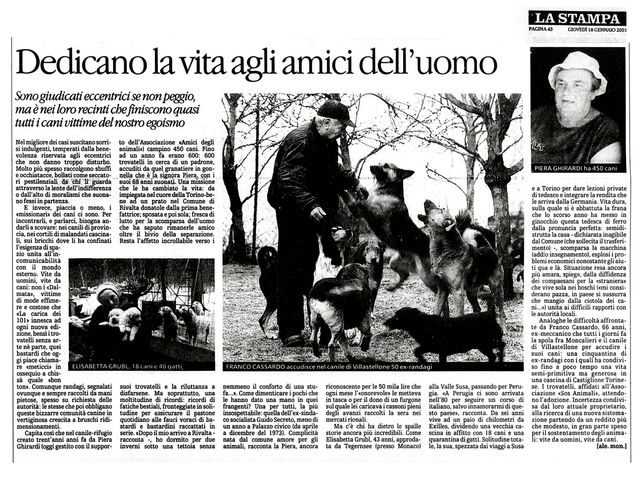 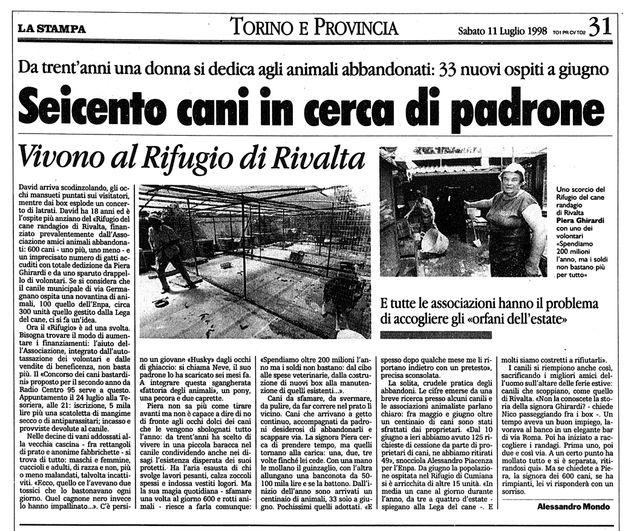 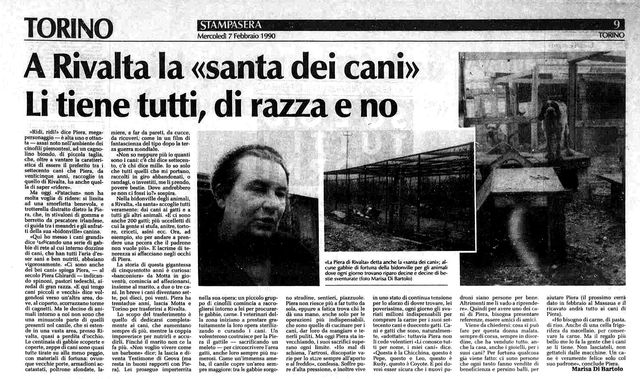 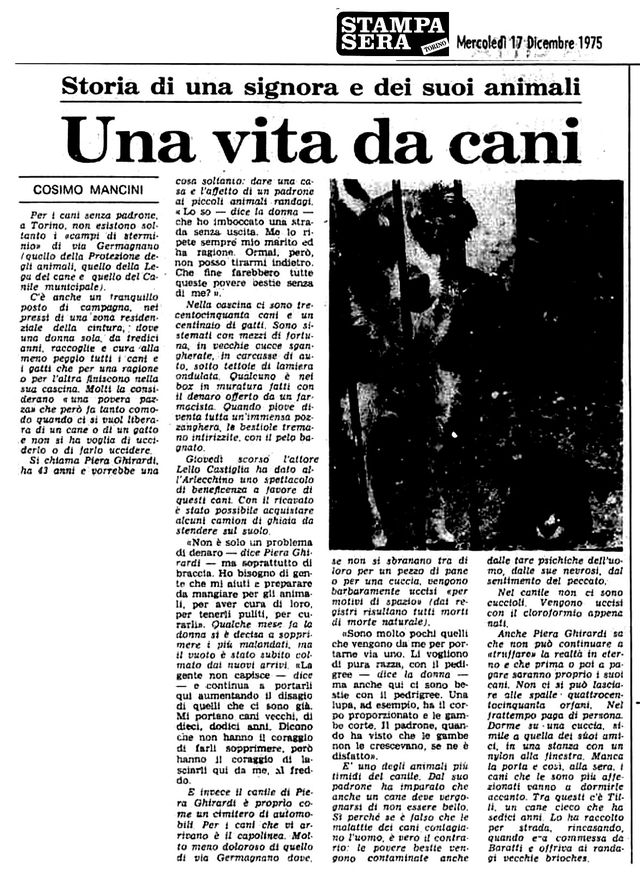 We could call this the Oskar Schindler of the dogs, the Mother Teresa of Calcutta of Cats, Mahatma Gandhi of stray, and so on.


Luigia Ghirardi (nicknamed “Piera”) born in Turin (Italy) June 24, of 1932. It has a huge passion for animals of any breed. Save a Pony (Baron) from the slaughterhouse and begins to accommodate Tibetan goats, ducks, sheep, pigeons, rabbits, orphans of all kinds and many more "friends" which is a worthy setting (almost always by yourself). To these are added over time many, many, many dogs and abandoned cats. First one, then two, three, 10, 100, arriving to accommodate more than 600 dogs and 200 cats (she knows each one by name them) !! All offers welcome, lots of love and a bowl hot food every day. In 1970 Piera left the Turin rich and wealthy abandoning the work. He moved to Rivalta di Torino (Turin South), where greeting is for animals abandoned the mission of his life. She founded the Ark of Piera, Refuge of Stray Dog and the Forsaken Animals which adheres later the Friends of Animals Association. First alone (and later with the help of dozens of volunteers, supporters and benefactors) takes a plot of land where prepares with makeshift materials the first box to receive their "guests". Many may not remember, but years are very hard and difficult. “Life dog" would almost say. Order not to miss any of his orphaned 4-legged friends, Piera think before them. Under a tin roof, without even the consolation of a stove to warm, sleeping on the floor of the precarious couch, almost a "doghouse" (a sagging armchair and a luxurious mattress crumpled found in landfills). Use a concrete mixer to cook with a nice outfit very naive toilet ... (cornfields under the stars). It bears all its discomforts as if she too share the wretched existence of his proteges. Then comes the first cabin, then a ramshackle trailer, and farther on a pseudo-prefabricated. Only recently a real masonry construction (a studio flat "all-in-one"). Among the cages so they start to arise trails, pitches and streets. The "Rifugio" (but it is very simplistic to call it that) soon turns taking shape his original dream, imagined half a century ago. A veritable ark. A lifeboat for all creatures marginalized from society and forgotten / mistreated by man. It is familiar thousands of dogs and cats that Piera saved, and thousands and thousands of Italian families through Piera have been privileged to have been able to adopt a loyal friend. And 'only thanks to Piera if today the Rivalta Refuge is equipped with a kitchen, bathrooms, a fully equipped infirmary followed by a reference veterinary (for medications, vaccinations and prophylaxis), a warehouse with cold storage, many heated designed box with the best construction techniques and a large cat shelter (all the while meeting the high standards of the law and the requirements of the health authorities).

In those years Turin, everything, for this area, has been a real "miracle on the fifth street". Despite the difficulties, all these years, his daily magic Piera Ghirardi has always managed to make her give food at least once a day thousands of creatures. Even today, the miracle continues, it is amazing how he could have achieved all this, it all started with this great little woman who did everything by itself (without subsidy and / or benefits, it is worth pointing out). In such a world, marked by so much selfishness, it comes natural to ask how it was possible. A question so complex has a relatively simple answer: only thanks to its incredible strength of mind and his immense love for the marginalized and the defenseless. At 84 years Piera Ghirardi - despite all his illnesses and his ailments - he is still there in his Ark, closer than ever to all its dogs and cats. She, the "gentle giant", as a "guardian angel" is still there in the trenches, in the "front line" to fight his battle against the cruel abandonment ritual and of the human race prejudices (his unforgettable the famous phrase: " a dog should never be ashamed to be beautiful "). After nearly three quarters of a century Piera is still beset by his one, big, big problem: not being able to never say NO to all animals given annually to bring him from every part of Italy.

One wonders: but we do what we can do for this old woman, full of disc disease and osteoarthritis, always running, always in disorder, which sold everything (even his house and his family jewels) for his cause?

After a lifetime devoted to the welfare of animals it seems right, it can at least pay a fitting tribute to such a high example of civil commitment. As well as a nice gesture, this recognition would be a "thank institutional" really enjoyed by thousands of Italian citizens, to whom Piera Ghirardi, in over 50 years, has given a multitude of beautiful teachings, experiences and memories.

Considering that the prestigious title of Knight of the Order of Merit of the Italian Republic is assigned to citizens distinguished for particular activities in the social and humanitarian there seemed natural to think of this wonderful lady, so special: "Piera" Luigia Ghirardi.


The Honour of Knight Order of Merit of the Italian Republic is the first among national honors and is intended to "reward merit acquired to the Nation in the field of literature, arts, economy and the disengagement of public office and activities for social, philanthropic and humanitarian ... ".


If you, too, share this initiative, join us by signing this petition to the links:

This petition will be delivered:


The President of the Italian Republic On.le Sergio Mattarella

The Chairman of the Council of Ministers On.le Matteo Renzi

The Department of State Protocol