The European arms dealers profiting from the refugee crisis

Major European arms dealers involved in selling arms to the Middle East are some of the same corporations now profiting from militarising EU’s borders, reveals a new report researched by the Dutch NGO Stop Wapenhandel and published by Transnational Institute. The report, Border Wars, examines the booming border security market that has emerged to take advantage of the EU’s announced goal of 'fighting illegal immigration'; and which has gathered pace in the wake of the arrival of thousands of refugees from war-torn Syria. 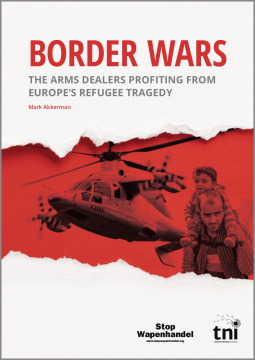 Estimated at some €15 billion in 2015, the global border securitt market is predicted to rise to over €29 billion annually in 2022. The big players in Europe’s border security complex include arms companies Airbus, Finmeccanica*, Thales and Safran, as well as technology giant Indra. Three of these firms - Airbus, Finmeccanica and Thales - are also among the top four European arms traders, all active selling to countries in the Middle East and North Africa, fuelling the conflict that is the cause of many of the refugees. Between 2005 and 2014, EU member states granted these firms (and others) arms exports licences to the Middle East and North Africa worth over €82 billion.

The EU policy response to refugees which has focused on targeting traffickers and strengthening its external borders (including in countries outside the European Union) has led to big budget increases which benefits the arms industry. Total EU funding for member state border security measures through its main funding programmes is €4.5 billion between 2004 and 2020. Frontex, its main border control agency, has had its budget increased 3688% between 2005 and 2016 (from €6.3m to €238.7m). The arms and security industry has also successfully captured much of the

“It is perverse and immoral” says Mark Akkerman of Stop Wapenhandel. “The industry that has helped create the crisis is now profiting from ‘securing’ Europe’s borders. This might provide security for the arms firms’ CEOs and shareholders, but it’s only fuelling worsening insecurity and suffering for refugees.”

As well as exposing the corporations profiting from the refugee crisis, the report also reveals how the arms and security industry helps shape European border security policy through lobbying, through its regular interactions with EU’s border institutions and through its shaping of research policy. The European Organisation for Security (EOS), which includes Thales, Finmecannica and Airbus, has actively lobbied for increased border security. Moreover many of its proposals, such as its push to set up a cross European border security agency have eventually ended up as policy – see for example the transformation of Frontex into the European Border and Coastguard Agency (EBCG).
“The EU is closing the door to desperate people fleeing war, yet seems only to happy to open the door to the arms dealers who trade in death and now police our borders,” said Nick Buxton of Transnational Institute and co-editor of the report. “To really address the refugee crisis, we need to stop fuelling the conflicts in the first place, and invest money spent on arms firms into providing a safe passage and a fair treatment of refugees.”