Activists from the Liverpool Social Forum picketed the Shell garage on Aigburth Road yesterday, as part of Hands Off Iraqi Oil's day of action. 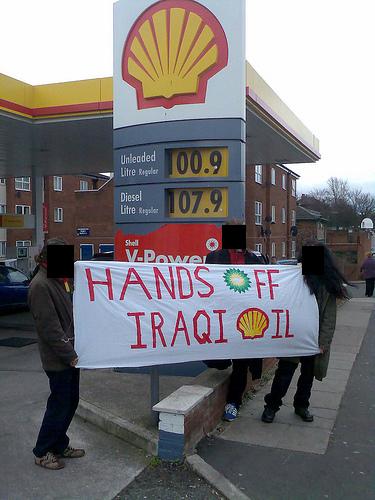 We decided to participate in January, when Greg Muttitt of Hands Off Iraqi Oil came to our social centre, Next To Nowhere, and gave a talk on conditions in Iraq. He told us about the proposed oil law which the US puppet government is trying to pass, which would guarantee massive profits to western oil companies, while leaving Iraqi workers in poverty. He also described some of the inspirational resistance which the law is facing from members of Iraqi oil unions. Our response was taken in solidarity with those workers in struggle, and to help raise awareness about the main reason British soldiers are still in Iraq.

Yesterday's action was very effective, getting information out to many people who were using the petrol station. Activists engaged in conversations with many drivers, and received a lot of support. People in cars then spent their time queueing on the forecourt reading our leaflets. Our banner also got loads of passing drivers beeping their horns and raising their fists (only a couple of times in anger at us!).

This is something we may try again, especially with the fifth anniversary of the invasion coming up in a few weeks.

Merseyside TUC and Merseyside Stop The War Coalition were also due to picket the BP garage in Scotland Road yesterday.