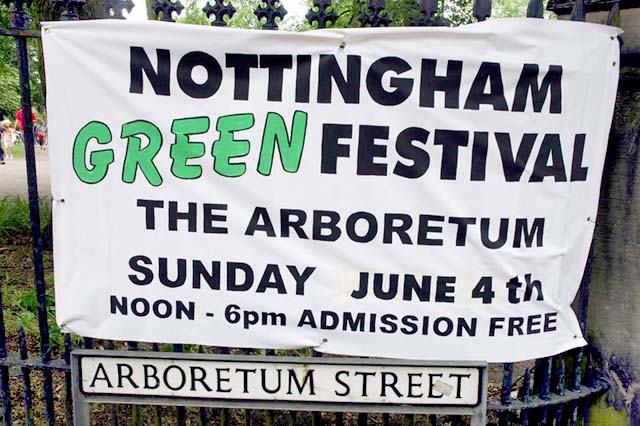 Greenweeks in Greater Nottingham aims to celebrate the achievements of local people who are helping make our bit of the world a cleaner, greener, healthier, safer place.

Festivals and fairs, open days and guided tours, walks, rides and talks, encompassing a range of topics and in a variety of locations in and around Greater Nottingham. http://www.greenweeks.org

The Arboretum Park is a perfect setting for Nottingham's biggest and longest running free green event. For almost a quarter of a century ethical and green issues products and alternative ways of living have been offered to the people of Nottingham to gently encourage their responsibility to the Earth and our future…

Now is the time as it was then, to change and make a difference starting with yourself and you're own home, your workplace and how you travel there. Its up to each and every one of us. We have the power in our choice of what we buy.

Choose organic, biodegradable and fair trade and with you the world changes for the better.

With more than 100 information and product stalls, food and children's activities. This year's event is the best place to start…

Musical Entertainment @ The Bandstand -The Summer of Dub

Nottingham based Sweetpotato has joined forces with the Nottingham Green Festival for the fourth year to provide and ensure smooth running musical entertainment.

This year has brought forward an overwhelming amount of outstanding local live music talent enough for six festivals. Giving opportunity for a complete new line up of live acts this year that proves despite DJ culture in Nottingham live music is alive and healthy!

THE SOUNDCARRIERS - Hey these guys were at Woodstock? If you missed Woodstock do not miss them at a wooded festival near you. Take stock of yourself and get there early to hear their awesome and all original sound that opens the 2006 Green Festival.

THE TRAMADOLLS - Have a large following yearning for their precise and original 'indie rock' the all women band are regularly billed at many of Nottingham's 'right on' live music events their support for good causes reflects their massive popularity.

BRIO - Featuring Jamaican born Earl sanders from Inner Roots, who were on the scene in the early eighties. With a new gaggle of musicians, backing vocalists and horns can swell the collective to as many as nine. Influence' as broad as Latin, funk, soul and gospel are mixed with a roots reggae base to produce a 'sound like sunshine'.

THE WHOLESOME FISH - The Cajun dance folk are back with a slap of thy thigh and a 'slam dunk' of a tankard of ale on an oak table! If you know of em you'll be glad if it's the first time you've seen em you'll be glad.

MOLARA - Headlining this year's event having just returned from gigs in Croatia and Slovenja and currently busy recording an album with Mad Professor. This hybrid band is saturated with accomplished reggae musicians from Dubmerge, Headmix Collective and fronted by Dub-Dance pioneers Zion Trains lead vocalist the beautiful, conscious raising and ever powerful Molara. Molara has forged a fearsome reputation as a live performer, her commanding, emotional delivery has enthralled festival and club audiences across the World. Molara are bringing fully live reworks of Zion Train classics and new original works to rock Nottingham to its very foundations.

Vina Ladwa with her students of Asian Dance will perform traditional colourful costumed Kathak dance routines from India between bands in front of the bandstand.

Capoeira a martial art originally from Angola in Africa that was taken by Slaves to Brazil, where it evolved into a dance to amuse the captives masters, and became one of the origins of modern day break-dancing. A Nottingham group accompanied by traditional instruments will perform and invite visitors to attempt this amazing physical ritual.