Mayday was celebrated properly in Nottingham. On the 1st May the PCS civil service union celebrated by going on strike, picketing and marching, including through Nottingham to a rally in the Congregational Hall. Picket lines sprung up with the sunshine all over Nottingham this May Day. Besides the main civil service workplaces (Revenue and Customs, Department of Work and Pensions, Driving Standards Agency) all sorts of office blocks in the City, housing a civil service work unit, sprouted a PCS picket in the door way: many experienced pickets; many first time pickets. Read full report.

On 5th May another Mayday march decended upon the city. Marchers rallied in the Brewhouse Yard, just around the corner from Ye Olde Trip to Jerusalem, departing just before one. The march was led by a samba band followed by the No Borders, No Nations, No Deportations banner. A good few hundred people made their way up Castle Boulevard, onto Maid Marian Way and then down Friar Lane. After having been at the Market Square and once back in at the rallying point, marchers were addressed by speakers talking about Darfur, the Democratic Republic of Congo, the occupation of Iraq, the rise of the BNP, the PCS strike last week and ID cards. There was also music by bands from Zimbabwe, Kurdistan and even Birmingham. Read full report. 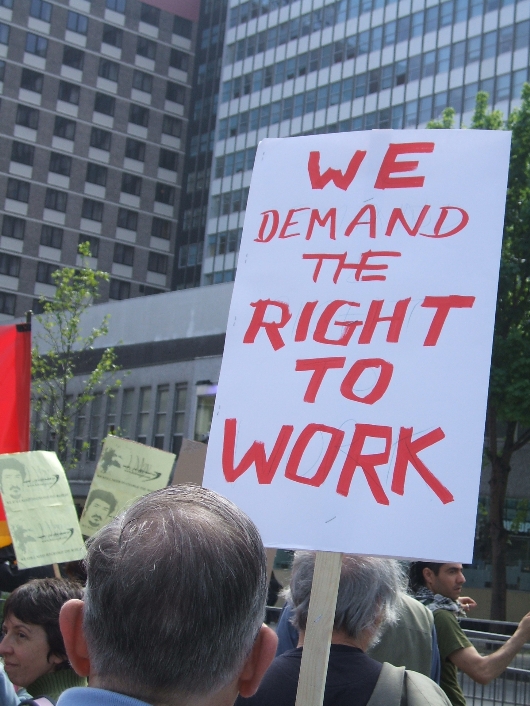 I get the accompanying picture demanding the right to work, honest I do, especially for asylum seekers who are not allowed to, but I'd also like to think that fighting *against* the system of working for capitalist (or Maoist state) bosses is a better overall goal for the workers' movement!

Check out worldwide Mayday pics - just love that red and black in Jakarta...