About 30-40 people gathered at the UK headquarters of Heckler & Koch, the world's second-largest manufacturer of handguns, assault rifles, machine guns and grenade launchers. It was recently found out that their HQ is based on an industrial estate in Lenton, Nottingham so some people decided to pay them a visit...

There were about the same amount of police officers as protesters, in an attempt to keep them off the actual estate where the company is based. There was also the honour of the Forward Intelligence Team (FIT) who travelled all the way from London for the event. The demonstration was called by the Nottingham group of 'Disarm DSEi' which is a grassroots campaign against the UK’s largest arms fair, at which Heckler & Koch will be exhibiting their weapons later this year. 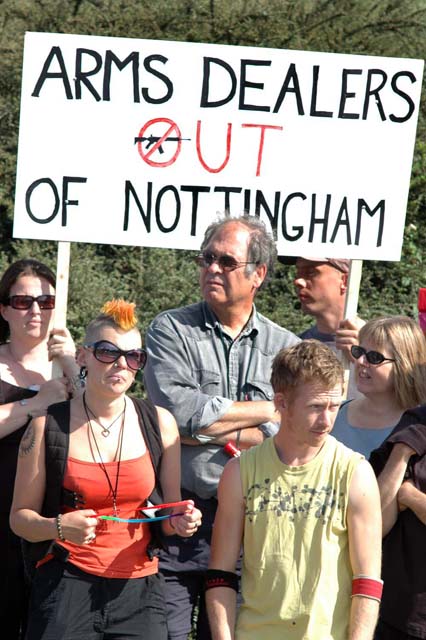 Heckler & Koch is the world's second-largest manufacturer of handguns, assault rifles, submachine guns, machine guns and grenade launchers. Their UK HQ is an anonymous unit on an industrial park off Lenton Lane, NG7. It is responsible for selling guns around the world. Half a million people are killed by small arms each year, three quarters of whom are civilians. Literally millions of Heckler & Koch small arms are in use in around 90 countries. Heckler & Koch has licensed its weapons for production by repressive regimes such as Turkey, Iran, Mexico, Thailand, Pakistan, Saudi Arabia and Myanmar. Beyond the reach of EU arms embargoes, these countries have supplied the weapons to conflict zones such as Indonesia, Kenya and Sri Lanka.

H&K guns have been used in wars in Bosnia, East Timor and Sudan. The Heckler & Koch G3 rifle has been used by the often murderous militaries of Bolivia, Brazil, Chile, Colombia, El Salvador, Guyana, Haiti, Papua New Guinea, Paraguay, and Peru. These examples illustrate the unethical and uncontrolled nature of the industry in which Heckler & Koch is proud to operate.