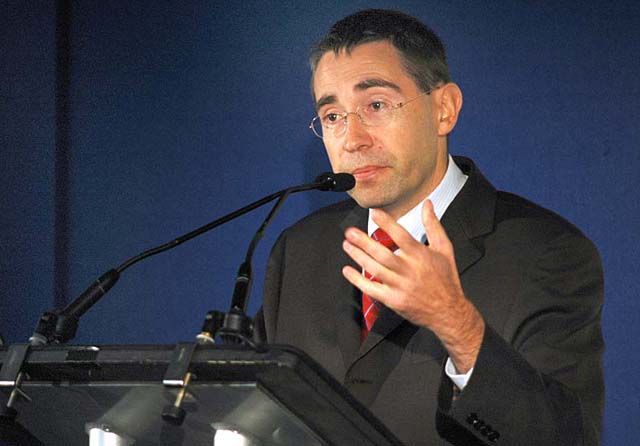 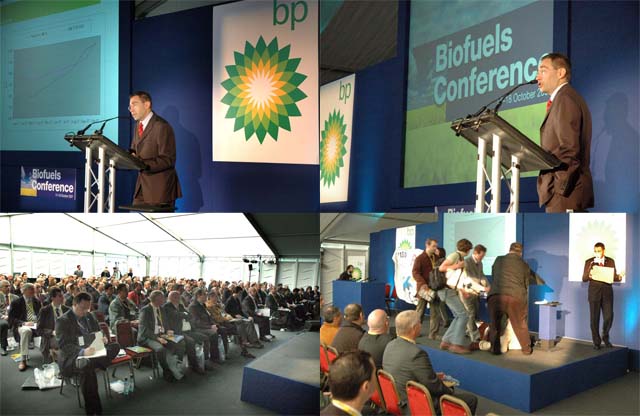 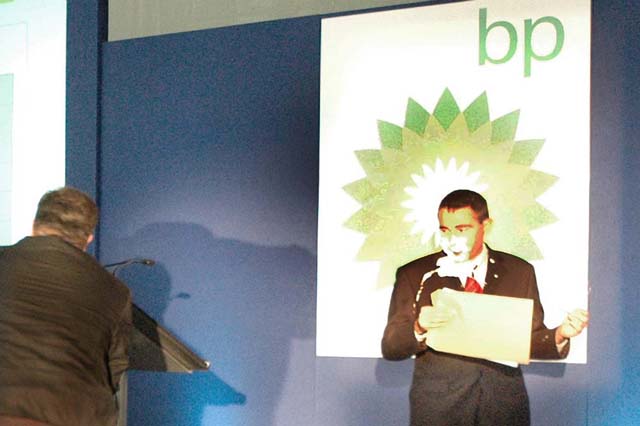 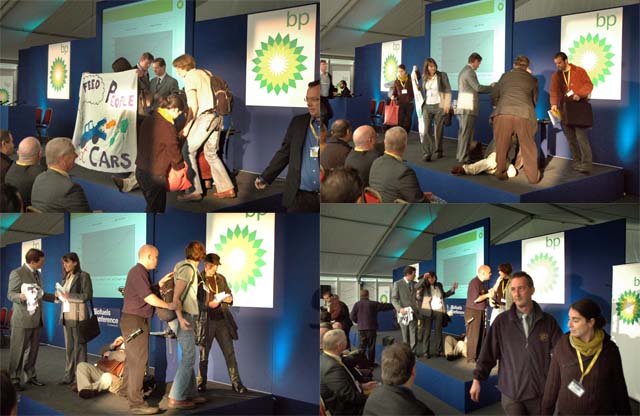 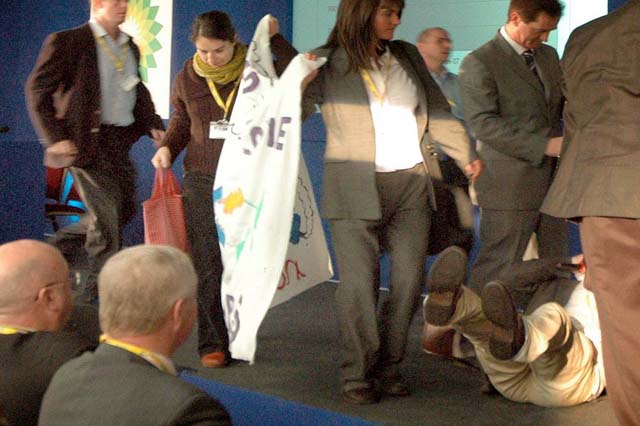 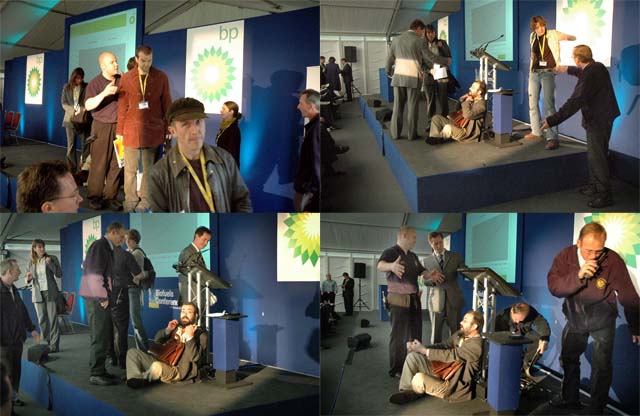 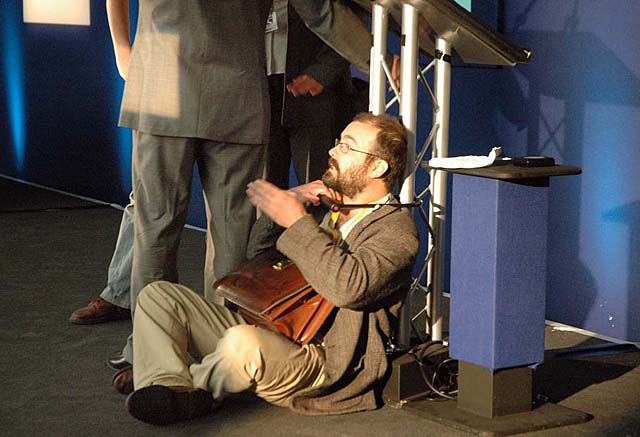 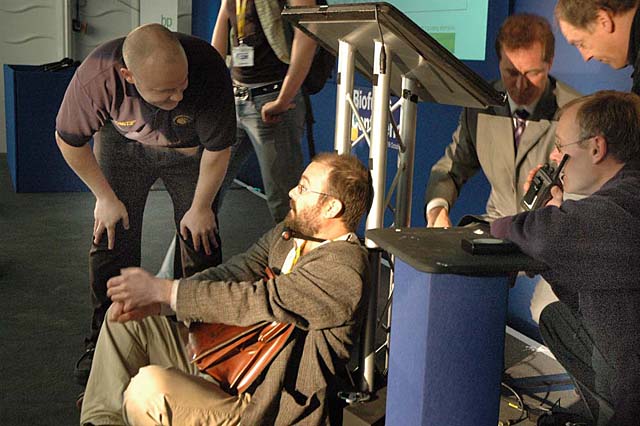 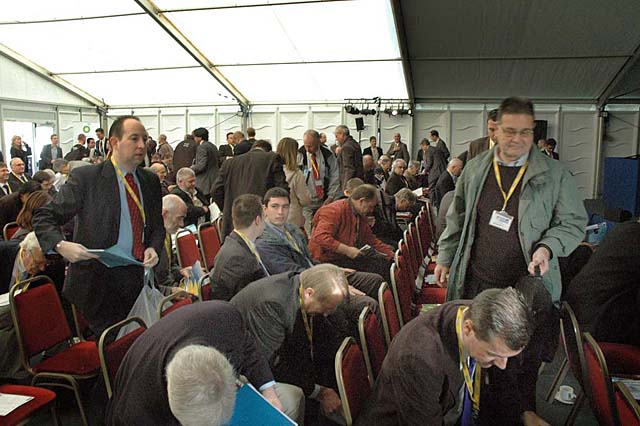 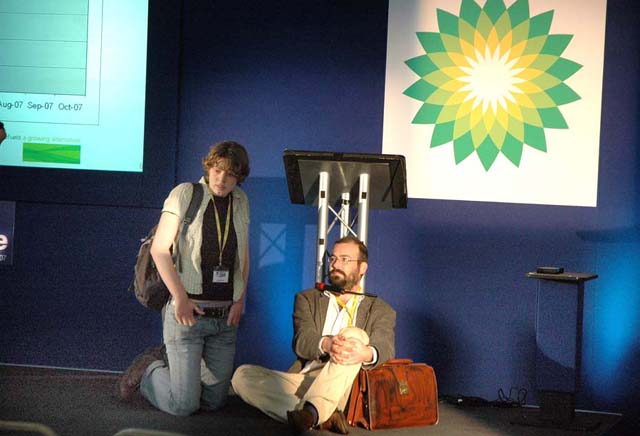 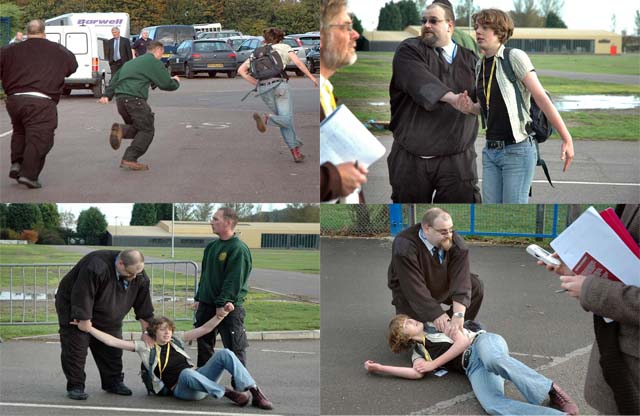 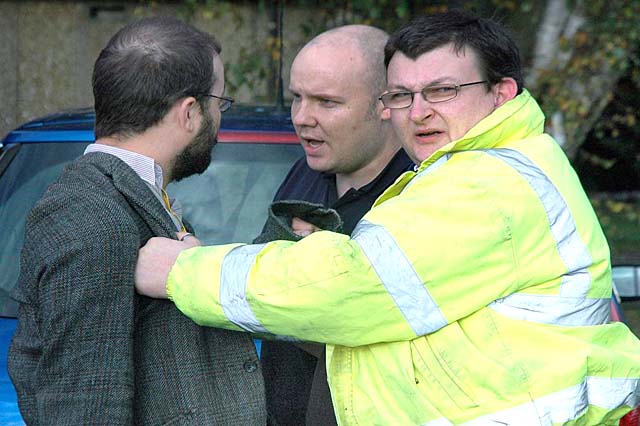 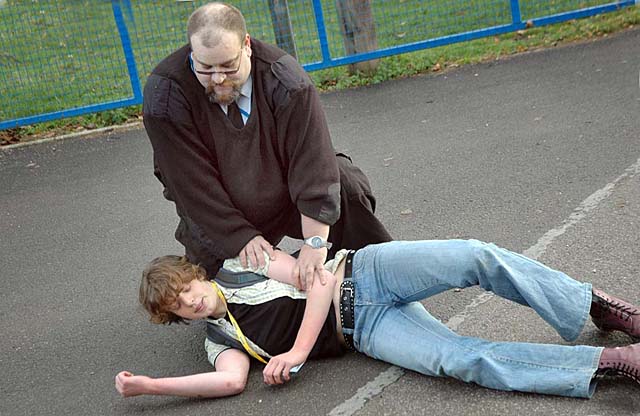 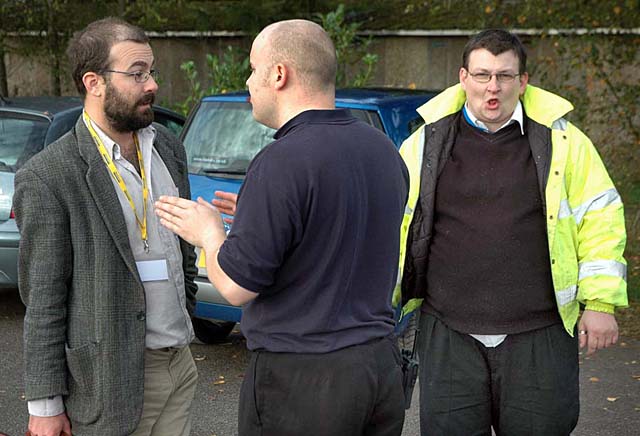 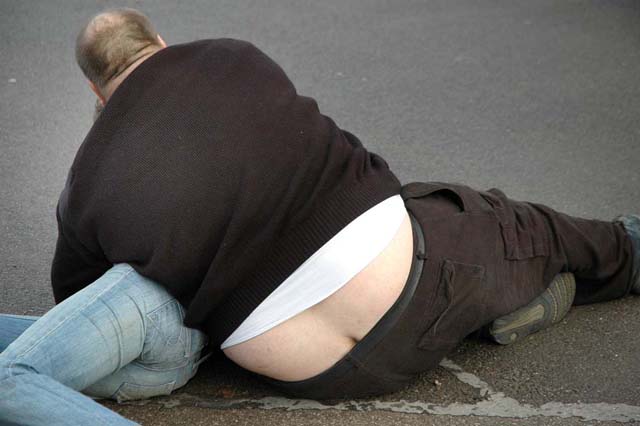 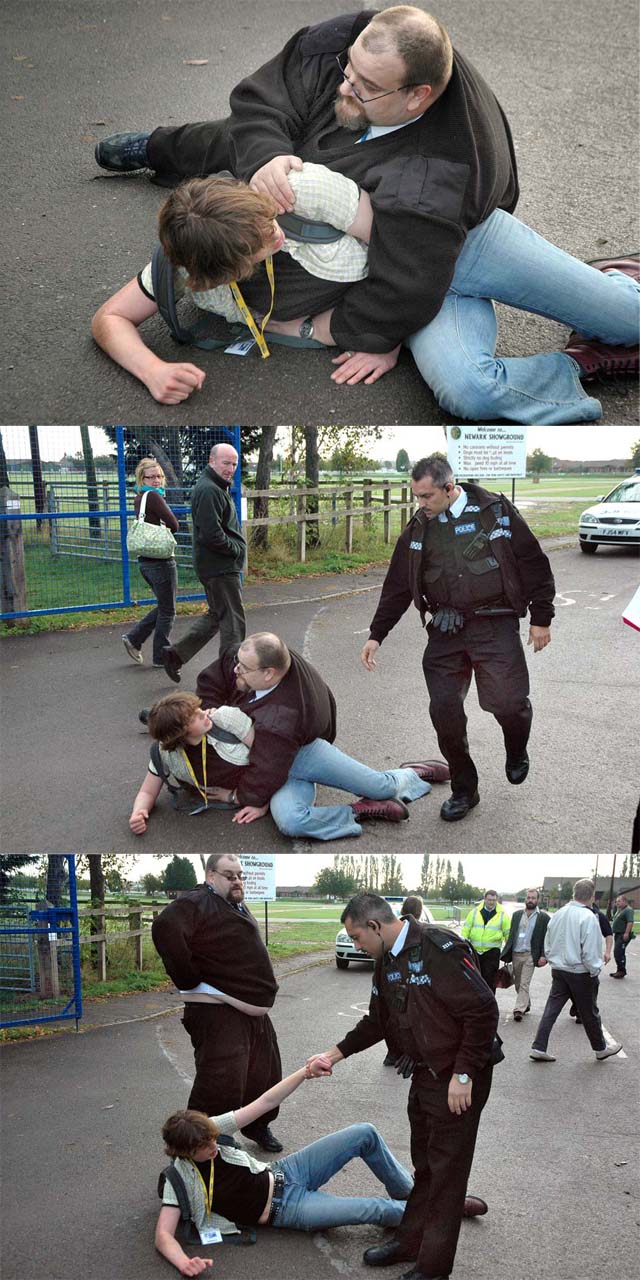 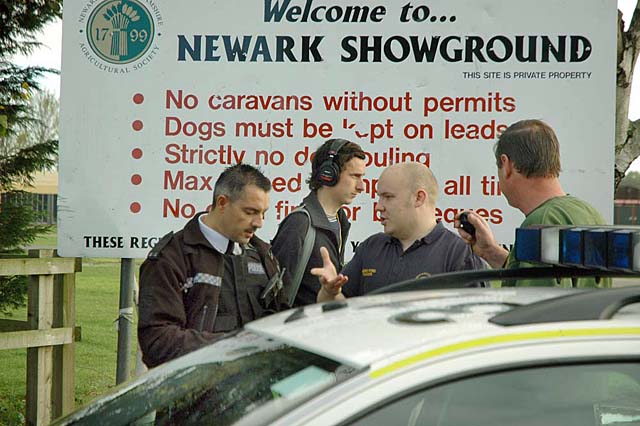 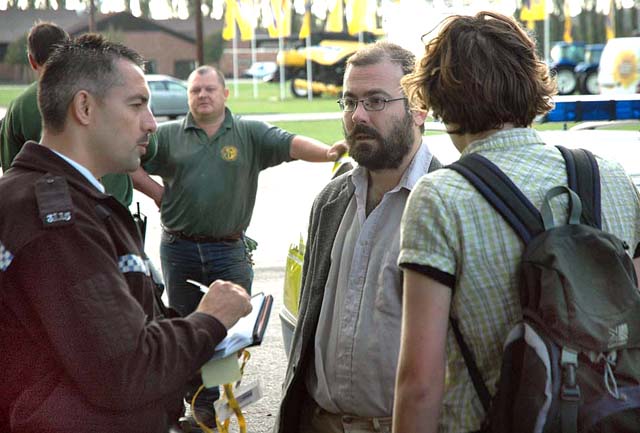 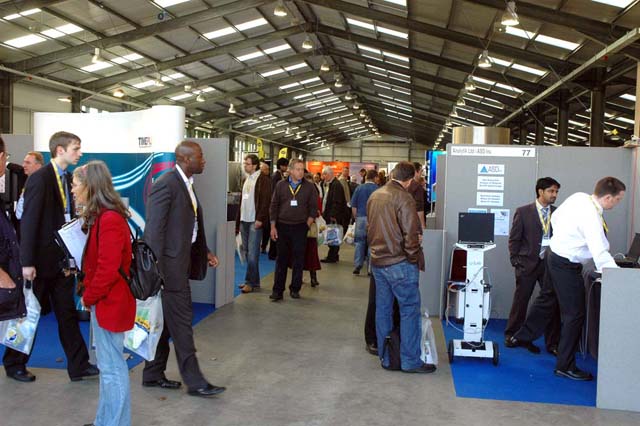 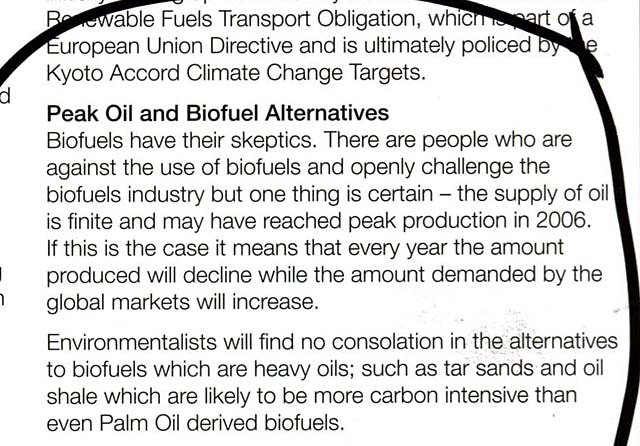 The exhibition, featuring over a hundred trade stands, ran alongside a conference which opened on Wednesday with a key note speech from BP Biofuels’ Europe & Africa Director Oliver Mace, but was quickly thrown into chaos when a number of people dressed in suits marched onto the stage to target BP’s ‘dangerous and dishonest’ greenwash and protest at the catastrophic effects of replacing climate-stabilising ecosystems with arable crops for biofuel feedstocks.

A stunned audience gasped as a cream-pie was launched at Mace, while activists swarmed the stage and handed out leaflets to attendees. One of the protesters D-locked himself to the podium, telling delegates “we need to reduce our consumption now – technological fixes are not the answer.” Panic alarms were then set off around the room and the conference was halted.

Later a press conference was held at which Eastside Climate Action gave a statement saying: “Biofuels are not part of the solution, they are part of the problem. We need lifestyle and economic change, a reduction in consumption and local production of all our own needs.”

BP, the main sponsor of the Biofuels conference, did not represent themselves at the press conference through fears that attention would be focussed on the protest. Oliver Mace was said to be ‘shaken’ by the morning’s events.

Richard Price, conference organiser and Biofuels Media director, said that one of the aims of the event was to have some debate which surrounds issues such as food versus fuel. He also offered a platform for those wanting to raise objections and concerns with the biofuels industry.

Price pointed to future biofuel technologies, known as second generation biofuels, which use plant matter such as Jatropha and algae, and do not normally enter the food chain. Price and others are claiming that these may offer advantages such as higher oil yields and the possibility of using otherwise unviable land.

Price admitted “we should be using less fuel, being more economical, as well as exploring biofuels. Next year we’ll see what the issues are, but clearly we need a much wider base.” Asked if the conference would accept sponsorship from BP in the future, Biofuels Media have so far declined to comment.

Later on there were further protests as campaigners gathered at the main gates to the Newark showground, where the conference was held. Activists from pressure group Biofuelwatch were in attendance to explain their concerns, and those attending the conference were engaged in discussions and handed leaflets explaining that deforestation -such as to make way for oil palms for fuel in Asia- is a major cause of climate change, accounting for up to 30 percent of global greenhouse gas emissions.

Biofuelwatch campaigner Deepak Rughani referred to a recent study by scientist Paul Crutzen, which found that Biofuels produced from arable crops are directly responsible for greenhouse gas emissions of up to 70% more than the equivalent of fossil-fuel. Rughani added, “when you add in elements of deforestation or land-use change, you are looking at massive further emissions due to the release of carbon stored in trees, plants and within the soil.”

Biofuelwatch campaigns against the use of bio-energy from unsustainable sources, namely biofuels that are linked to accelerated climate change, deforestation, bio-diversity losses, water and soil degradation, and the displacement and impoverishment of local populations and loss of food sovereignty and security. Aside from technological solutions, Biofuelwatch and other environmental groups believe cuts in greenhouse gas emissions must be based on overall demand reduction. This means reducing energy use and transport as opposed to replacing one type of fuel with another.

Save the Orangutan - Biofuel Protest

This looks like a great action. Without such exposure it is likely that many of the attendees would have been unaware of the damaging effects of biodiesel since it is seen as a "green" fuel and a solution to climate change.

Let's hope they invest their money in something slightly less destructive to humanity!

The biofuel industry has pie in its face!

This action was absolutely brilliant! Not only did it make the most hilarious Indy article I've seen in a long time (at the expense of those who deserve it) but it was also an excellent and timely way of bringing attention to yet another incredibly destructive corporate scheme (masquerading under the greenwash as usual). 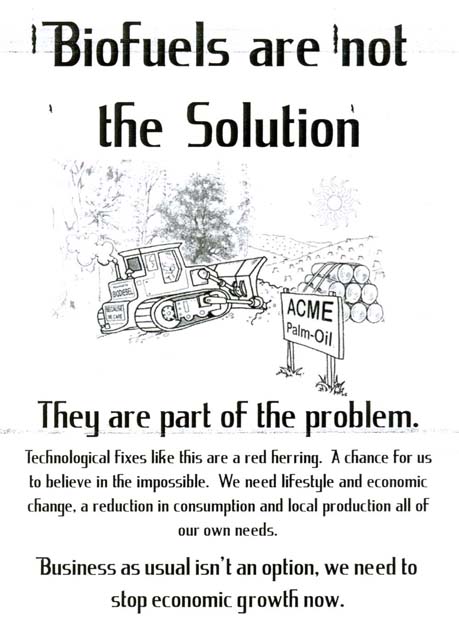 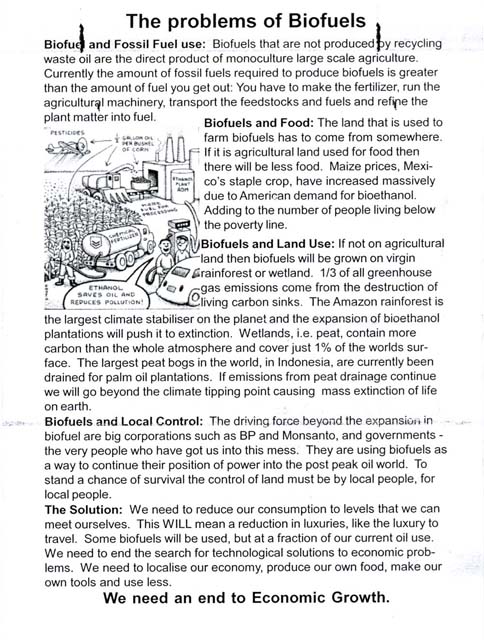 This morning a group of 15 climate change activists from protest group Food Not Fuel entered the BioFuel Expo & Conference taking place at the Newark Showground and took over the keynote speech. Oliver Mace, CEO of BP Fuels, the lead sponsors of the event received a cream pie in the face. Another campaigner was D-locked to the podium and various alarms were placed around the place. The hall was emptied and talks were cancelled. There were no arrests.

2. The BioFuels Expo & Conference (www.biodiesel-expo.co.uk) is the largest of its kind in Europe, and brings together big industry players such as BP Fuels, Deloitte & Touche and many chemical, agricultural and manufacturing companies.