On Tuesday November 27, Nottinghamshire Police used a Taser stun gun on a man in Beeston. Although it has attracted only limited interest, it could be an important development. Tasers have recently been introduced to the police arsenal in the UK, having been widely used by police in the US and Canada for some time. This happened with minimal public debate, despite increasing concerns about their use across North America. Currently restricted to armed response officers there are calls from both senior and rank and file police officers for their use to be greatly expanded. They certainly aren’t going to go away any time soon

According to the Evening Post, Notts police were called to reports of a man acting erratically outside the Natwest on High Road, Beeston at 11.30am. The Post also indicates that there was a suggestion the man might have been carrying a firearm, however it is now clear the man did not have a gun and there is little in the article to indicate on what basis such suspicions might have arisen. The various eyewitness reports certainly indicate erratic behaviour, but if anything make the presence of a gun seem unlikely. One account has the man shouting, “Call the police,” while another has him pushing people about threatening to “knock you out.” Hardly behaviour which would indicate he was armed. 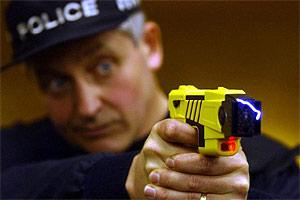 In the aftermath of the killing of Jean Charles de Menezes by armed police in London, it would be naïve to accept the police’s account of events without asking some probing questions. It is to be hoped that there is a thorough, independent investigation, but don’t hold your breath. Nor should you expect much to happen if it turns out the police were out of line. It emerged in November that a Leeds resident was tasered twice after suffering hypoglycaemic attack on a bus shortly after July 7, 2005 when police mistook him for a suicide bomber because he “looked Egyptian.” Despite an inquiry by the Independent Police Complaints Commission, neither the officers nor the West Yorkshire force have faced charges, while the two officers involved have thus far avoided any internal disciplinary action.

While the individual’s experience was no doubt painful, some proponents of Tasers would argue that he was actually lucky. Perhaps the main argument in support of Tasers is that they are preferable to the alternative of lethal force. Certainly it’s true that stunning somebody with 50,000 volts is not as likely to kill them as a good old-fashioned volley of hot lead, but there is nevertheless a long and growing list of people who have died after being tasered.

Silja Talvi argued in November 2006, “Although the company spins it otherwise, Taser-associated deaths are definitely on the rise. In 2001, Amnesty International documented three Taser-associated deaths. The number has steadily increased each year, peaking at 61 in 2005. So far almost 50 deaths have occurred in 2006, for an approximate total of 200 deaths in the last five years.” Indeed, in October of this year, Amnesty International called for a moratorium on Taser use after two people in Canada died after being stunned in the space of one week. These are disturbing trends and should give pause for thought to anybody glibly dismissing the weapons as “non-lethal.”

It should be stressed that “Taser associated deaths” are not clear-cut instances of Tasers causing death, rather they represent the cases where people have died shortly after being shot with one of the devices. It would be possible to challenge the figures on this basis, but to do so does not detract from the very real questions they raise. Coroners are often wary of attributing deaths to the weapons and usually prefer to equivocate on reasons when there is any grounds for doubt. This is unlikely to be helped by the minimal scientific literature on the dangers stun-guns pose. In 2004, Amnesty noted that despite being widely deployed by police forces around the world “there has been no rigorous, independent and impartial study into the use and effects of tasers, particularly in the case of people suffering from heart disease, or under the influence of drugs.”

The threat to life posed by the weapons is such that in 2005, Taser had to concede that they were not in fact “non-lethal.” The decision to drop the label in favour of the more equivocal term “less lethal” came following moves by the attorney general of Arizona, where Taser is based, to begin investigations into the company’s claims about safety studies it carried out on its products. They also made a number of other changes to the information they provide on the weapons, for instance dropping the phrase “leave no lasting after-effects” and replacing it with the claim that they “are more effective and safer than other use-of-force options”.

Quite apart from the threat they pose to people’s lives, Taser usage in the US and Canada where they are already widely deployed has displayed a worrying “mission creep.” While rhetorically usually posited as an alternative to traditional firearms, the “non-lethal” or “less lethal” appellation associated with the weapons appears to lower the threshold on the use of violence. Police officers have, in short, used Tasers in any number of situations where they would never dream of using live ammunition.

An Amnesty International report in 2004 argued that “far from being used to avoid lethal force, many US police agencies are deploying Tasers as a routine force option to subdue non-compliant or disturbed individuals who do not pose a serious danger to themselves or others.” Indeed, a 2004 study by the Denver Post into the use of Tasers in Colorado found that in one county a third of the 112 people shot with Tasers had been handcuffed at the time. Whatever one thinks about the way police treat suspects today, it is hard to imagine them being able to shoot 37 people with traditional ammunition without generating considerable controversy.

In effect, Tasers enable to the police to lower the violence threshold, which predictably increases the instances in which violence is used. In August 2005, police in Pittsburgh used Tasers (in conjunction with police dogs) to disperse a crowd of anti-recruitment protesters. This led to a review by the City Council on the weapon’s deployment by the police and drew criticism even from people who had previously advocated their use.

There have been calls for extended use of Tasers by both the Police Federation, which represents rank and file police officers and the Association of Chief Police Officers (ACPO). Clearly the government will be bound by other constraints such as cost, but these bodies together with the law and order mob represent a powerful lobby. We can, in short, expect Tasers to become an increasingly common element of the police arsenal, with the inevitable increase in use. Whether that will lead to anybody’s death is difficult to say with certainty, but nobody concerned about the state’s use of violence can ignore the problem. They’re coming. What are we going to do about it?

Tazers are the latest instrument of Police State terrorism

There seems no reasonable basis of belief whatsoever, on the part of the police that this man was armed. Whilst his behaviour may have seemed disturbing to some people, he was actually driving away when stopped by the Police.

The incident is very disturbing. What is to stop the Police using these weapons on any of us, for example, those engaged in political demonstrations, on the pretext that we might be "armed"?

I suspect that the true purpose of all this so-called anti-terrorist legislation is to criminalise dissent. We need to remember that globalisation began in Chile and was imposed through martial law, abductions, indefinite detention without trial, torture and murder. Many believe that global capitalism and our corrupt political elites will never be overthrown but by violent means. By issuing the police with these weapons, their getting ready.

I have lived in Nottingham for less than two years. I have never been out and not heard a police siren. There is reputedly a lot of crime in this city, and certainly, last summer I was threatened or assaulted at least 5 times in the space of a few months and my car was broken into, but none of this bothers me have as much as the local police.

New Labour has created a Police State. We need to smash them and it.