On Thursday around 80 protesters marched around the University of Nottingham's campus to demand freedom of expression and an end to the University's repression of student activists.

The campaign was started following the arrest of a student at a Palestine solidarity protest on the campus in November last year. In spite of the University's deployment of undercover spies and a police cameraman, the mood was good and protesters recieved a warm reception from other members of the student body. 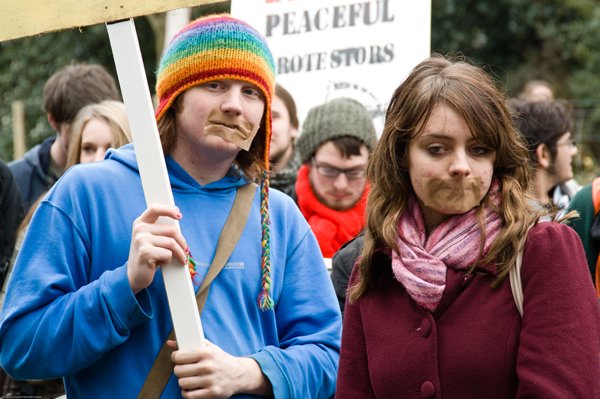 The protest began at the Students Union (Portland Building) and marched to the Hallward Library (scene of the arrest last year) and Trent Building (where the University Administration is based) before returning to the Portland Building again.

A number of demonstrators, including the student arrested last year, made speeches condemning the University authorities and the Students Union for siding with the authorities against their members. The bulk of protesters were students but a number of members of staff were present, reflecting a widespread concern about the unviersity's actions amongst lecturers.

In addition to the arrest of a student at the Palestine solidarity protest, other examples of University repression of students were cited by the campaign. One student was banned from the University's library facilities during exams for initiating a campaign to reduce the cost of library cards (necessary not just or borrowing books, also for entry to the libraries). Other students involved in a petition against the increasing cost of accommodation in halls of residence, and decreasing provision of services, were fined £300 and had their petition disallowed.

The demonstration made a number of demands of the University:

Protesters vowed to continue their campaign until these objectives were achieved.

Video from the protest 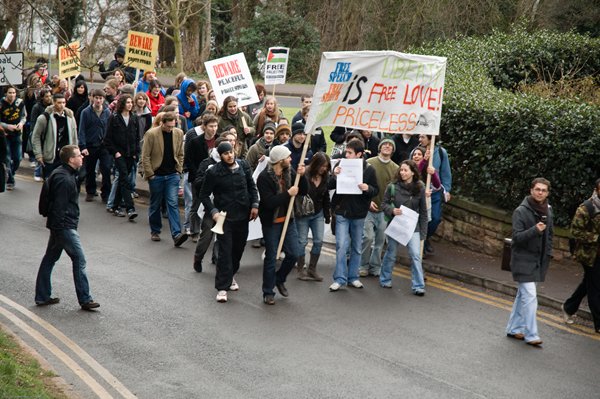 I reckon at the height of the demo there were about one hundred protesters!

Good vibes all round (apart from the slight tension caused by the attempted Isreali highjack of the demo) an extremely successful demo by all accounts!

Looking forward to the next one!