Dan is an activist from Nottingham who has joined the crew on board the Sea Shepherd vessel Steve Irwin in a bid to stop the illegal whaling activities of the Japanese near Antartica. The mission, named Migaloo, started last December and after refuelling in Melbourne last month, the Sea Shepherd crew is back in the oceans, have managed to track down the whaling fleet and have been in hot persuit of its main vessel, the Yushin Maru No. 2 for the last week. Accoring to one of the crew onboard the ship "the weather is getting colder and we are getting many hours of darkness now. The Antarctic winter is creeping up on us. The seas are getting rougher and we are getting blizzards." We joined Dan via sattelite phone to ask him about his adventures.. 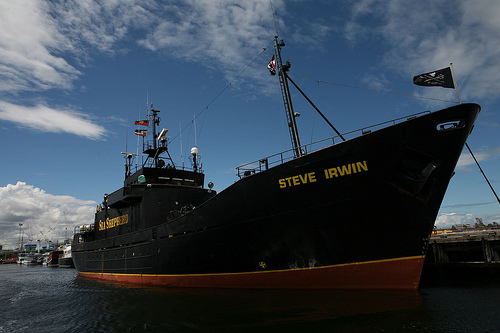 Q: And you thought you'd get away with not doing an interview with us? :-) (Dan left earlier than anticipated)

Dan: I knew you'd catch up with me eventually..

Dan: Yeah, I'm alright. We're in the middle of the southern ocean right now. In a big storm at the moment with things flying around everywhere..

Q: I read some stuff about the seas being really rough, varied at times it would be like sunny and then blizzards and things..

Dan: Yeah, I mean we've got about 4 meter waves and I'm not sure what the windspeed is..

Q: But you're all coping with it?

Dan: Yeah, we didn't expect it to be this bad, from the weather reports we were getting. But its here now..

Q: Could you explain a little bit about what it is that you guys are doing there at the moment?

Dan: Right now we are chasing the Japanese whaling fleet around the coast of Antartica. We'd like to catch up with them and stop them. By constantly chasing them we're hoping to reduce their ability to whale. [...] They're certainly not whaling in this weather. The last couple of days they haven't killed any whales at all.

Q: You've been on the chase for a number of days. Is there an end in sight? How long is this gonna go on for?

Dan: I mean depending on the weather and stuff we will carry on until our fuel runs out. Thats still a good few weeks yet, which should bring us to the end of the whaling season actually. We should be leaving the same time as the [whaling] fleet.

Q: Whats your job on the ship?

Dan: Everyone has their set role on the ship. I'm in charge of the deck department. I am also in charge of all the ships cleaning duties, making sure the toilets are clean. Also looking after all the equipment on deck, like the crane and the anchors. I'm also in charge of the inflatable boats which we use on our actions. Making sure they are in good working order and getting people trained up to use them. So thats my job. We've got navigators, we've got people in the gally cooking, we got people in the engine room making sure we have the power and [there is] also a communications officer, who keeps us in touch with email etc, lots of different jobs.

Q: Why did you decide to join the Sea Shepherd more than any other organisation, for example Greenpeace?

Q: Because at the moment there are a lot of laws protecting whales.. A lot of laws have been passed, international treaties and all sorts which basically prohibit the whaling, but no one to enforce them and that that is the task that the Sea Shepherd has taken on.

Dan: In this situation the Sea Shepherd is actually playing the role of the Australian navy or coastguard. We're in Australian waters and Australian territory. The Australian [Federal] Court ruled [recently] that the Japanese whaling [operations] inside their territory is illegal and that it should be restrained. There just isn't the political will to do that. Japan and Australia are important trading partners. There are numerous laws which are protecting the whales down here, I'm not an expert on all of them, but there is the Convention International Trade In Endangered Species, the UN World Charter for Nature, which is actually empoweres [ordinary] people to enforce these laws, the International Whalings Commission Moratorium on Commercial Whaling, and the Antarctic Treaty protects whales. So they are really blatently breaking a whole bunch of laws. So it is a case of law enforcement, more so that protesting.

Q: Yeah, because I guess there could be a whole load of laws, but if there is no one to enforce them..

Dan: Yeah, its only worth as much as the piece of paper its written on.. These treaties should either not be agreed on or be enforced.

Q: You're obviously doing a great job down there, is there anything people can do on land to support the stuff you're doing down there?

Dan: When you go to the Sea Shepherd website there are numerous people you can contact to [confront] them about their inaction. There is Sea Shepherd UK who are constantly raising funds. This ship consumes huge amounts of diesel and then the maintenance and repair. People can be sure that any money they donate will be used directly to [confront] the whalers.

Q: Is there anything you'd like to say to the people in Nottingham, some who you know and will be reading this?

Dan: Hello to everyone I know. Take care of yourselves back there. I'm a bit cold and wet, but yeah, safe so far and I'll see you all in a few weeks.

Q: Well we wish you all the best, you're doing a great job down there and there are tonnes of people who really support the stuff you're doing and we all know its very important so keep up the good work!

Recently on the UK newswire: Sea Shepherd Aussie Crew Prepared to Be Taken as Prisoners to Japan | Sea Shepherd Receives Message From the Australian Government | Sea Shepherd Finds Japanese Whaling Fleet: They Are On the Run Again