A number of alternative media projects have sprung up in Nottingham over the past months. In February the Riseup Radio project was launched, and this month sees a new edition of the Nottingham Sparrow, and steps towards the launch of a GreenZine aimed at young people.

Meanwhile, Notts Indymedia continues to go from strength to strength, with an astonishing number of contributions. In February, we hosted the UK Indymedia gathering, during which we were approached to produce a Nottingham pullout for The Mule newspaper. We hope that all of these projects flourish in the year to come, but they all need people to help make them work. That's where you come in! 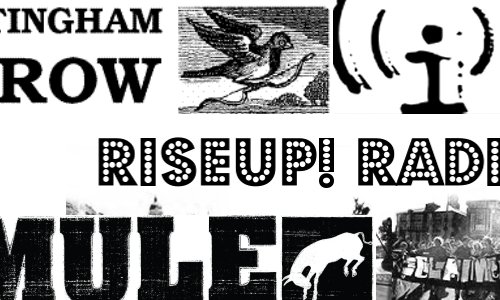 Alternative media is vital to activism, allowing us to disseminate the stories ignored or underplayed by the dominant media. Nevertheless, they often operate on a shoestring budget and are always on the lookout for new people to get involved. If you value any or all of these projects we encourage you to get involved as you can: write stories; maintain websites; organise benefit gigs; or just spread the word.

Notts Indymedia and others have launched a new radio show called 'Riseup! Radio'. The community based podcast includes reports covering issues often overlooked by other local media, as well as music from local artists and bands, and chat about stuff that matters. Each month a new podcast will be downloadable through the riseup! Radio website, or by subscribing to our feed. Look out for extra features and new shows in the near future, but for now.. Download, listen, enjoy, distribute and comment on February's show! Get in touch at notts[at]indymedia[dot]org

After a winter of near hiberation, The Nottingham Sparrow returns with issue 3 for March 2008. Articles on Instant Muscle, Victoria Baths, BNP festival, Derby NHS, and more. Email: nottingham[at]afed[dot]org[dot]uk

This is for anyone aged 16-25 who is interested in helping to start a green magazine for and by young people in Nottingham. Contact: nottsgreenzine[at]googlemail[dot]com

MULE is a not-for-profit, grassroots, UK-wide project committed to using media production and mass distribution as a tool for promoting social, environmental and economic justice and peace.
MULE is a quarterly newspaper with a print run of 20,000, handed out free on the streets of Britain.
MULE's mission is to reach out to a wide-ranging cross section of British society through being the only cost-free and freely distributed national newspaper dealing with positive social change.
MULE addresses the burning issues that the mainstream local and national media neglect, without screaming down peoples necks, being boring or preachy, or speaking to a select, in-the-know audience.
Local contact: notts[at]indymedia[dot]org

We aim to generate a fresh perspective on mainstream media-twisted stories and give a voice to individuals and communities throughout Nottinghamshire that are marginalised and have no say in the mainstream media.

Nottinghamshire Indymedia is an open–publishing website which means it only excists because people post their articles on the website. No registration, just click 'publish your news' in the top right corner and fill in the publishing form. Your article will appear on the newswire shortly. (This might take some time if it's busy).

We're always looking for more people to get involved. We have meetings on the second Monday of every month, although the venue is currently up in the air. Get in touch: notts[at]indymedia[dot]org

Wow, when you say not forn profit, you mean paid work

Wow, when you say not for profit,you mean paid work just without all profit going to a notorious billionaire. No one needs to work for nothing, unless they can afford to. Not for profit can mean cooperative companies, which can be massive & support above minimum wage pay, far better to work for than most.
BBC & Evening post both check indymedia for articles & stories due to our commitment to local issues & community contacts, a good place to learn & make your reputation & or put up stories you love

Quoting from the article:

" MULE is a not-for-profit, grassroots, UK-wide project committed to using media production and mass distribution as a tool for promoting social, environmental and economic justice and peace. "

'Not-for-profit' indeed means that no one makes money out of it, as in: all the proceeds go back into producing the media we feel strongly about. But how you think that might mean that people get paid for the work they do, that's a mystery to me..

No one gets paid. Not within Notts Indymedia, MULE, Riseup! Radio or the Sparrow.. and never will..

involved in all the above

Thanks for the plug - get printed copies in the Sumac Centre

Hopefully another Nottingham Sparrow will be out for Mayday!

It's perhaps worth saying you can get a free printed copies in the Sumac Centre along with many other anarchist papers and magazines, locally produced and otherwise (most cheap to buy even if not free as these are produced to share the ideas, not to make money!). Our free national bulletin 'Resistance' can be found there (also online

Anarchist Federation groups in other towns produce their own titles such as The Fargate Speaker (Sheffield) & The Black Apple Press (Hereford). Independent anarchist papers like Gagged! (South Wales) and 'Now or Never' (Norwich) are worth reading. You can sometimes find the odd issue of these in the Sumac as well.