Around 70 people had set of to travel on a bank holiday Monday which is no easy task as public transport has a natural tendency not to run or has a limited service on bank holidays, for a picnic in a remote part of Derbyshire. The weather reports had all predicted thundery showers for the day, which seems to be normal for a bank holiday outing, but this did not seem to deter the people who had gathered at the visitors centre at Shipley Country Park, Heanor Derbyshire.

The event had been organised by a new campaign group called Leave it in the Ground and Earth First! to oppose new and existing open cast mining in the UK and solidarity to international groups who are having their lives and land trashed in places like Phulbari, Bangladesh by British company GMC Resources PLC. 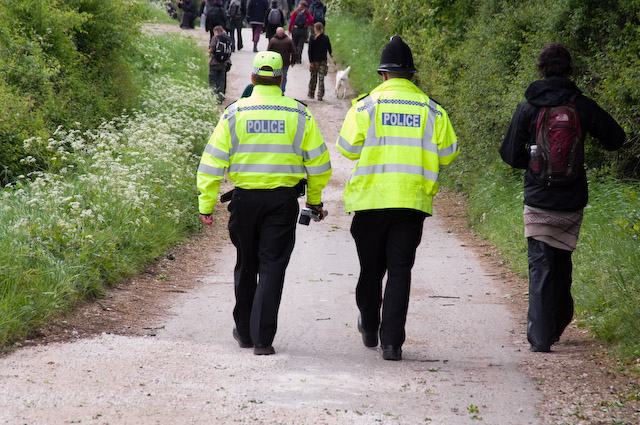 After every one had finished socialising at the visitors centre with cups of tea, they headed of through the park to the area of plush green fields and ripped out hedgerows, which is to be the area of the new open cast mine called Lodge house owned by UK Coal as we were followed by an evidence gatherer and a few other police officers who were making notes on how friendly and sociable we were.

UK coal had erected new fences within the boundaries of the fields declaring the 122 hector site of destruction waiting to happen and activists out for the day just walked through the gap that will eventually have huge earth moving vehicles and plant machinery tearing up the fields. There was no attempt by the police to stop us or asking us not to go in, it was already decided we were going to trespass, and there was no way they could keep us out anyway.

After a short breach of the boundary we came across a farm, complete with tree house, dog kennel with its bedding still inside and the odd toy in the garden that looked as if it had been abandoned in a hurry from some pending disaster. We gathered in the garden of the farm to hear a local person explain what was happening in the area. We heard how UK Coal owns the land and that the locals in the surrounding villages of Smalley, Mapperly and West Hallem had been fighting against the company for the last 5 years against the plan to turn the area into an open cast site. Despite it being against planning regulations the secretary of state gave the plan the go ahead in 2007. The fields we had just walked across is going to have its soil stripped in July and August of this year and the field to the south of the farm is going to be stripped this July, so it was a last look to see it in its natural state, even though UK Coal are taking the unusual step of returning the site back to green fields, not that the grass grows well or the hedgerows are replanted and the fields lack the natural diversity of species.

More alarming is that this is not just unique to Derbyshire; open casting or strip mining as it is sometimes known is on the agenda of the government and a change in policy 2 years ago forced by power stations and coal companies through lobbying has forced it as a legitimate way for them to make money, despite the fact it is seriously damaging to the climate and the UK is not going to be able to cut its agreed emissions by burning coal and that the Lodge House site is going to have 1 million tonnes of carbon removed which means when it is burnt that’s 3,666,666 tones of carbon dioxide.

We all moved off back into the fields with the fence an ominous marker in the distance to the size and scale of what is to be lost and sat down to enjoy some food. Veggies had gone mobile and supplied us with vegan pasties and their famous cake, so we sat in the long grass, drank some excellent Elderflower Champaign that was being passed around while the police hid at the farm without refreshment keeping an eye on our activity and social refinement. A kite flew over head and the children played football with the adults, all the usual accompaniments for a picnic.

We headed off through the south field and saw a bungalow with its windows and doors sheeted up in steel, another victim of the site I thought. Both properties are the place most people dream of owning with the scenic views.

After a stroll on this bottom field we headed on to Bell Lane which divides the Lodge House site and headed into Smalley with another tea stop at the local Village Hall and an opportunity to use the toilets and more of Veggies cake and pasties. Some local people were there waiting for us and the group broke out into a meeting, in which we assessed the situation over open cast mining in the UK and what we could do about it. The energy and enthusiasm of which was enormous and in a very short time action plans had been drawn up. Smaller meetings in regions ensued so they could organise into affinity groups. People had travelled from Oxford, Cambridge, Manchester, Leeds, Nottingham, Lancaster, Norwich, Crew, Sheffield and Derby as well as other areas that I probably missed and showed how much concern there was over the matter of open cast mining.

After a quick tidy up in the hall some set of back the way we came for the long journey home while others decided to take a slightly longer route over the fields of the site, just to keep the trespass going. We went into the main entrance of the site still unopposed by the police after a slight navigational error this all changed.

The local farmer had objected about us to our yellow jacketed escorts and we were being told we had to go back or face being arrested and after checking the map, or not being allowed to go to the few steps more to the nearest footpath we went back the way we came to join the footpath at the back of the farm, again to be blocked by the police, one of which had led the farmer around the back and out of sight. One of the group decided to go and have a word with the farmer and next thing we were being shouted to come this way; the chat with the farmer was obviously a success and we headed for the footpath with a happy farmer and some of his family waving us on like we were champions. This however made us question what the police had said to the farmer?

Re the last paragraph, as far as I am aware the police have no powers to stop you from crossing private property. I guess if the land owner is objecting they maybe could argue that they were trying to stop a breach of the peace.

People should be aware of this. Sounds like your group did the right thing.

The police indeed said they were escorting us off the land, following a complaint from the farmer, to avoid a breach of the peace. We argued that under law they had to escort us off by the nearest available route, which was the direction we wanted to go to the nearest footpath 100 yards away. They didn't give us that choice, but wanted to escort us back to the road and a roundabout route; though there were more of us than there were of them, we didn't want to bring a confrontation on with more police called and possible arrests. We read the map and as said, negotiated our way onto another footpath which suited our aims. Part of our decision was that we didn't want to piss off the local landowners if we could avoid it, who might be against the mine.

rebel with a course

tiz true fleedom that tiz true we still strives in diligences, our day will an often does come even midst ourselves alone we bee biz biz biz badgoods doing goodbads back towards fickles and fate for reflectives and aways from high vizzys ever mismanaged via governmental dizzys; shame on hillary benn ,Tonys tayter for democratic divsion from locals wishes and wants of no open casts upon green belting, villages melting amidst toxins, so is orange an blue anything new? tiz we fear nots, or prefrences for notts coal plant bosses etcetera'z'z'z'z ,dink---tock tock tock, the clock no tick:::::::ing: slan a la loo2: