Hundreds Join Demo for Academic Freedom and Against Deportation

On Wednesday May 28, students and academics held at protest at the University of Nottingham in defence of academic freedom and against the imminent deportation of former student and university staff member Hicham Yezza. The protest was called following the "anti-terror" arrests which saw Hicham and Rizwaan Sabir, a student acquaintance, detained for almost a week for possession of documents Sabir had downloaded as part of his research into political Islam. After it became clear on Friday May 23 that Hicham was facing imminent deportation, the focus of the protest inevitably shifted.

At 2pm there was a public reading of the "radical materials" which had led to the original arrest. The crowd was addressed by Alan Simpson MP before marching down to the Trent Building (where the university autorities are based) where people assembled in near total silence. 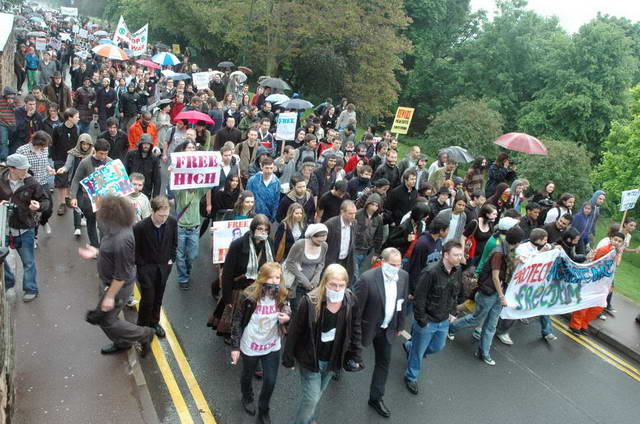 The protest was, by some way, the longest the university has seen in a very long time. The turn-out was particularly impressive given the fact that it was raining for much of the time. Despite the large numbers in attendance, when assembled inside the Trent Building, protesters were so quiet that it was possible to hear birds singing.

Banners with messages such as ‘protect academic freedom’, ‘Right to research’, and ‘Free Hich’ were on display. Snacks, ‘Free Hich’ T-shirts and copies of Ceasefire (the peace movement journal of which Hicham is editor), were on sale to help raise money to cover Hichams’ legal costs.

The police were notable by their absence at the demonstration. There were a number of security staff at the Trent Building, dressed in fluorescent jackets, but they remained inside, away from the bulk of the protesters.

Hicham was called and addressed the protestors from detention. Hicham said, “I am humbled and buoyed by all the support I have received, and my spirits are high. Thank you everyone, you are a credit to Nottingham.”

Given the high profile nature of this story, there was extensive media coverage including Central TV, BBC Midlands, BBC Nottingham and the Evening Post (more here).