Two people (one of them a student) who were arrested on the Nottingham University campus last Wednesday using "anti-terror" powers have today been released without charge. After seven days of incarceration, the two men (aged 22 and 30) were released from custody. The manner of the arrests, the intimidating police presence on campus, and the gullible media coverage have raised serious concerns and anger amongst the student body, the academic faculty, and the general public in Nottingham.

The arrests were carried out due to the alleged possession of "radical material," specifically an Al Qaeda manual relevant to the younger detainee's dissertation, which had been emailed to the other for printing. Despite their own admission that there was no threat to local communities, the police decided to launch a full-blown "terror" operation and put the students, their families and many friends through a colossal amount of stress. Meanwhile, police on campus searched bags and dominated a central area, creating great fear amongst the student community that was totally disproportionate to the apparent ‘threat’ of radical material. The harassment of friends and relatives by the police also raised serious concern.

One of the two was rearrested on his release under "immigration legislation." See this feature for more info: Nottingham Uni Detainee Innocent But Still Facing Deportation 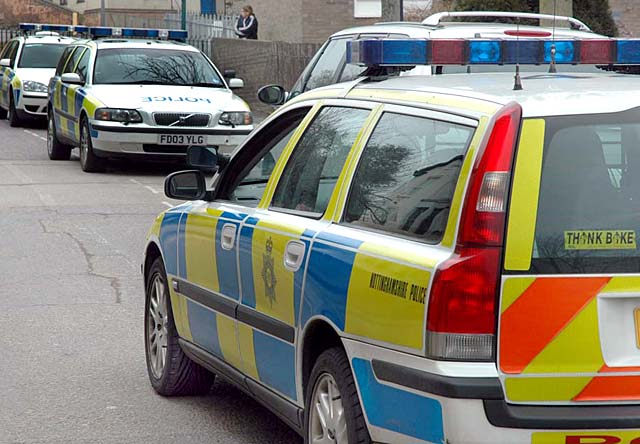 The arrests were precipitated when the younger of the two detainees downloaded an Al Qaeda training manual, widely available on the internet and downloaded in this instance from a US Government website, in the course of his research into political Islam. He emailed this to the older detainee, a member of staff to get it printed.

There was never any suggestion that either of the were part of a terrorist cell nor that they posed any threat to anybody else. Police communicated that there was "no cause for alarm within local communities" (see their press statement here), and a spokesperson for the university, who have fully co-operated with the "low-key" operation, said "there is no risk to the university community or to the wider public."

However, the whole operation seems to have serious and frightening racial overtones. One officer who investigated the case is reported to have said: "This would never have happened if he had been a white student." The re-arrest of the second student on dubious immigration grounds displays a clear desire on the part of the police to smear the two men in the hope of gaining sympathy from the tabloid press.

Furthermore, the university and police rhetoric during this time period was surprising to many students and academics. Amidst the great amount of rhetoric that the university put out during this period, supporting the police and assuming guilt of its own students, it also spoke of groups or individuals who "unsettle the harmony of the campus." This seemed to be a direct reference to the peaceful political activism and vocal, peaceful protest that the university now seems to think it can clamp down on under the Terrorism Act.

Finally, and most importantly, this has constituted a huge and serious attack on academic freedom in the university. The arrests raise concerns about the opening of a door to the criminalisation of research into radical movements which necessarily involves the study of contentious primary documents. Bettina Rentz, a lecturer in international security and the student's personal tutor, said: “This case is very worrying. The student downloaded publicly accessible information and provoked this very harsh reaction. Nobody tried to speak to him or to his tutors before police were sent in. The whole push from the Government is on policy relevance of research, and in this case the student’s research could not be more policy relevant.”

Furthermore, the indefinite incarceration of two innocent people under "anti-terror" legislation has created a prevalent climate of fear on campus. Everyone realises that the police can - and WILL - hold anyone they want to without any evidence or charge for up to 28 days. With an increased police presence on peaceful demonstrations, there is great fear that the police are criminalising peaceful activists using the "anti-terror" legislation.

Concerned students and academics are coming together to decide on the appropriate action to take. A petition has been circulated amongst staff and students, expressing concern about the detentions and demanding that the university acknowledge the "disproportionate response" to the possession of legitimate research materials and a demo on campus is being planned. 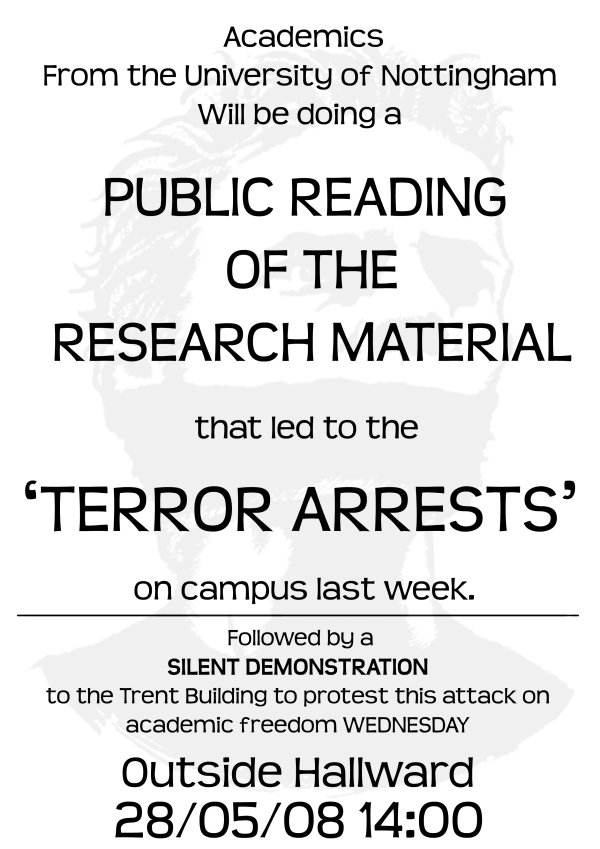