Basic civil liberties and human rights have not fared well in the so-called "War on Terror." Using the threat of terrorism as a justification, governments across the world have introduced a raft of repressive legislation. In the UK we have witnessed crackdowns on protest and an increase in police powers, alongside a rapidly proliferating surveillance apparatus, soon to be supplemented (unless we can stop it) by a national ID database. Concerned about these and other threats, as well as a crackdown on freedom of expression at the university itself, Nottingham Student Peace Movement organised a conference addressing all these issues at the University of Nottingham on April 19.

The conference was addressed by a wide range of speakers including Liberty, the Campaign Against Criminalising Communities (CAMPACC), and Maya Evans from anti-war group Justice Not Vengeance, the first person to be prosecuted under Section 132 of the Serious Organised Crime and Police Act 2005 which severely restricted protest around Parliament. 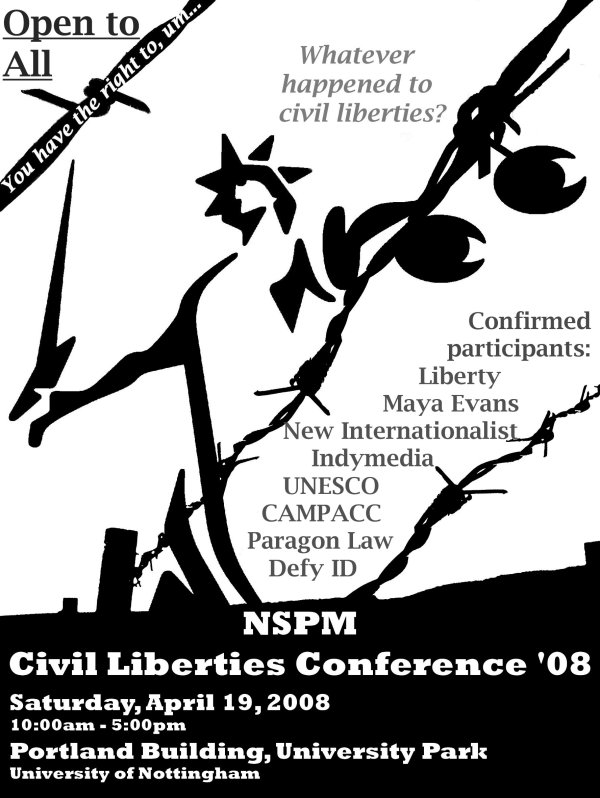 The conference was inspired, at least in part, by the response from university authorities to a peaceful protest against the wall being constructed by Israel around the West Bank. When members of the Palestinian society constructed a mock wall outside the Hallward Library on campus, the police were called and one student was arrested, ostensibly to apprehend a "breach of the peace." This did not go down well amongst the student body and drove the formation of a campaign for freedom of speech at the university, which earlier this year organised a large demonstration.

Nevertheless, the conference focused primarily on the broader government orchestrated crackdown. A Nottingham Student Peace Movement spokesperson explained: "Spurred into action by the use of the 'War On Terror' to establish a police state in the UK, NSPM has decided to gather minds together. With the advent of SOCPA, increased policing, FIT teams and CCTV surveillance, our human rights are being eroded steadily." She added that "students at Nottingham will be the first to be given ID cards. So why is this happening, who benefits, and will it really stop the supposed threat of terrorism?"

The opening session was addressed by Maya Evans and Eduardo Gil-Pedro from liberty. Gil-Pedro discussed the current situation in the UK, with particular focus on the proposed Counter Terrorism Bill. He argued that campaigners have a good chance of defeating this bill which is likely to allow detention without trial for up to 42 days (the current 28 days already being the longest period allowed by any western democracy). Evans recounted her own experience of being arrested in October 2005 after conducting an unauthorised ceremony remembering those who have died in Iraq since the US-UK invasion.

People attended a workshop and presentation from civil liberties campaigner Maya Evans, who was the first person to be convicted under Section 132 of the Serious Organised Crime and Police Act 2005, which made it illegal to protest at a number of sites around the UK as desingnated by the home secretary, and in the area around the houses of parliament unless authorised by the Metropolitan Police Commissioner. Students were informed about the governments' plans to molest people's information by linking up personal records from a range of activities including health visits and shopping (The National Identity Register), and shown the shocking comparisons between the UK and other countries, of the length of time people can be detained by police without charge (Terrorism Act 2000, Anti-terrorism, Crime and Security Act 2001, the Prevention of Terrorism Act 2005, Terrorism Act 2006, Counter Terrorism Bill 2008). Some students did not yet feel their own freedom being infringed, but were aware of friends of non-english descent being persected, and had observed police harassment in public, of young people who appear to be of north african or pakistani/indian/bangladeshi descent. Others were panicked at the thought of being obliged to register biometrics or have an ID card when renewing a passport.

At the same time, Gil-Pedro and a lawyer from Paragon ran more legalistic sessions on the right to protest and illegal deportation respectively.

Mark Barnett and Yishak Kassa Tefferi from CAMPACC spoke in the first session of the afternoon. Tefferi discussing the impact of the list of proscribed "terrorist" organisations introduced in the Terrorism Act 2000 and updated by subsequent anti-terror legislation. He argued that this blurred the definition between terrorists and national liberation movement, with many of the proscribed groups engaged in campaigns which endanger British interests or against UK allies.

During the next workshop session, Notts Indymedia ran a session. This was supposed to be done in conjunction with the New Intrnationalist, but unfortunately they failed to turn up. We discussed how the site had been used by students at the university in the past and showed people how to upload their own news. While we were doing this, Defy ID discussed the coming database state and how to maintain your anonimity. Mark Banett also ran a session to help build a campaign around the sixtieth anniversary of the Universal declaration of Human Rights in December and there was a showing of SOCPA The Movie.

The final plenary session was brief, but gave several of the speakers the opportunity to round up and make some final comments before people left to go back and continue the fight for their rights.