Monthly pickets have been taking place outside the offices of Nottingham-based weapons manufacturer Heckler & Koch since May last year. These protests have been heavily policed, but the police's attempts to exert control over the campaign have not ended there. Local newspaper, radio and TV, who had shown some enthusiasm about reporting these demos, received a word in their ear from the police press office as well as the H&K, warning hacks that it would be "irresponsible" to publicise the fact that H&K has offices in the city.

Frustrated by this official suppression of the media, campaigners organised a demonstration in the Market Square in December to force the issue into the public consciousness. Drawing connections between the arms trade and refugees who are forced from their homes and end up in Notttingham, this event was very successful. Hoping to build on this, Thursday 22nd January saw the first of what are to become monthly missions to the city centre to spread the word about H&K. There will now be protests at H&K's offices at Easter Park on the second Monday of the month (at 12:30) and a further awareness-raising demonstrations in the city centre, every fourth Thursday(at 12:30), although as dates and locations of demos may vary from month to month, interested readers are invited to check with the campaign website.

Links: Shut Down H&K | Campaign Against the Arms Trade | Dealing and Wheeling in Small Arms 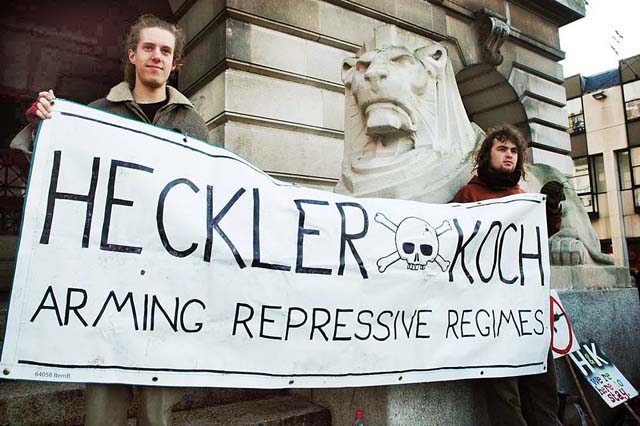 Literally millions of H&K small arms are in use in over 90 countries. H&K machine guns are currently being used by notoriously trigger-happy corporate mercenaries Blackwater in Iraq and Afghanistan. The company has shipped guns from the UK to warzones such as Bosnia and Nepal, and has licensed its weapons for production by repressive regimes such as Turkey, Mexico, Thailand, Pakistan, Saudi Arabia and Burma.

Furthermore the company effectively evaded UK and EU export restrictions when these licensees sold H&K weapons on to conflict zones including Indonesia, Sri Lanka and Sierra Leone. Heckler & Koch may claim to no longer license weapons to some of these countries, but the tragedy continues to unfold. For example, Iran continued to produce and supply H&K rifles to war-torn Sudan after its license agreement expired.

Legal loopholes, brokers and gunrunners make it all too easy to evade arms embargoes, as comedian Mark Thomas demonstrated by arranging a shipment of German-made H&K submachine guns to Mugabe’s brutal regime in Zimbabwe (an escapade detailed in his book As Used on the Famous Nelson Mandela). Furthermore, small arms have a very long shelf life and older models are often resold to countries with poor human rights records. The H&K G3 rifle is still used by the often murderous armed forces of Angola, Bangladesh, Brazil, Ethiopia, and Nigeria. These examples illustrate the unethical and uncontrolled nature of the industry in which the company is proud to operate.

It is companies like H&K that make the guns that are smuggled into the UK to be used by gangsters, so it is ironic that the company sells guns to the British police (seen in action around Nottingham here and here). Sixty per cent of small arms end up in the hands of criminal gangs and civilians, prompting a lethal arms race between criminals and police in which the only winners are arms dealers such as Heckler & Koch. In a city that has become infamous for gun crime, it is obscene that this company is selling guns to customers around the world.

It is perhaps for these reasons that H&K does not advertise its presence in Nottingham. Its official address is a PO Box, its industrial unit is completely unsignposted, and unwanted callers are discouraged by rapid armed response from Nottinghamshire Police, acting as the company’s own security guards.

Activists have found protests outside the facility heavily policed, with large numbers of officers, supplemented by Evidence Gatherers and members of the Forward Intelligence Team (FIT) brought in from as far afield as Staffordshire and London. It is in this context that police interference with the campaign's media campaign has taken place, although they remain cagey about the reasoning behind their attitude. When asked to explain police interference with the media, Superintendent Simon Nickless was extremely evasive. He did not even acknowledge or deny police interference when asked for an explanation.

* The Notts Anti-Militarism mailing list is for announcements about local opposition to the arms trade, including demonstrations against Heckler & Koch. To join, just send an e-mail to nottsantimilitarism-subscribe(at)lists(dot)riseup(dot)net.

* The Shut Down H&K mailing list is a discussion forum for people who want to get involved with sharing ideas, planning and co-ordinating the campaign against Heckler & Koch. To join, just send an e-mail to shutdownhk-subscribe(at)lists(dot)riseup(dot)net.