It has been a busy few weeks for animal rights activists from Nottingham. Local activists were involved in the demonstration against Crufts in Birmingham but there have also been demonstrations in Nottingham against the sale of fur by clothing chain Cruise. There are also ongoing demonstrations against the so-called Great British Circus which makes exploitative use of animals in its shows. 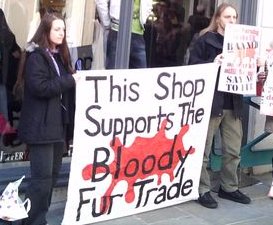 Demonstration outside Cruise in Nottingham

Animal rights activists from Nottingham, London and elsewhere gave a grand farewell to the Kennel Club, hoping that this will be the last year that people will be allowed to breed dogs for racial(breed), purity whilst thousands of healthy dogs die in shelters around the world because of a demand they created.

The purpose of the demo at the Birmingham NEC, collectively organised by grassroots campaigners, was to pass on two very important messages to the public.

2. Breeding dogs is pointless when there are existing dogs all over the world needing homes.

ALL dog breeding is a problem

There is a sense in which all breeding of dogs by human beings is morally unacceptable.

All dogs are descended from the wolf and we only have domestic dogs because human beings, for their own selfish purposes (mainly to kill other animals) deliberately bred wolves in a selective fashion in order to create all the different shapes and sizes of dogs we have today.

It could therefore be argued that we are morally obliged to cease the breeding of dogs, while at the same time doing our utmost to protect wolves in the wild and to preserve their habitat. As long as we have the wolf, the dog will not die out, as they are essentially the same species.

In addition, it is surely also morally unacceptable to deliberately or negligently breed dogs (no matter how kindly the breeder might be) in a situation where many thousands of dogs are being "put down" every year because no homes are available for them.

Alice Walker's words (from her book "The Color Purple") that "The animals of the world exist for their own reasons. They were not made for humans any more than black people were made for whites, or women for men" are just as much applicable to dogs/wolves as they are to any other animal.

That is not to say, of course, that we should not try to help dogs that have already been bred, in order to save them from death and suffering.

Nottingham Animal Rights were demonstrating in front of Cruise clothing store today to encourage the chain to adopt an anti fur policy.

We had a great response from the public who were happy to take leaflets and sign our petitions to show there disgust with real fur. Even the manager of the shop was sympathetic and asked could he have a photo of us all to send to his HQ to let them know his shop was being targeted as part of the nationwide campaign aimed at Cruise's fur policy, in the hope that it would help persuade them to take up the anti fur policy.

Although the Nottingham branch, it has to be said, does not stock fur this was part of a larger campaign up and down the country in support of other groups (whose local outlets unfortunately do stock real furs), to show our solidarity with animal rights and anti fur campaigners up and down the country to show that cruise will be demonstrated against until they adopt an anti fur policy.

The demonstration in Nottingham was peaceful and went without incident with great response from the public. 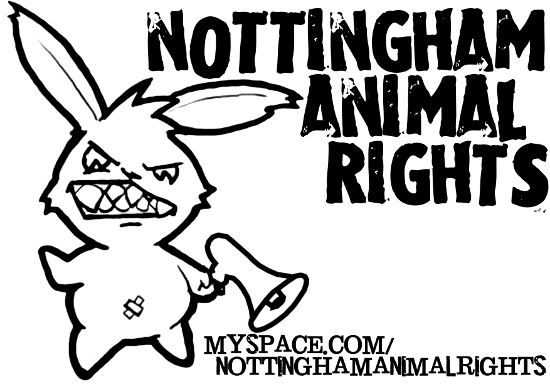