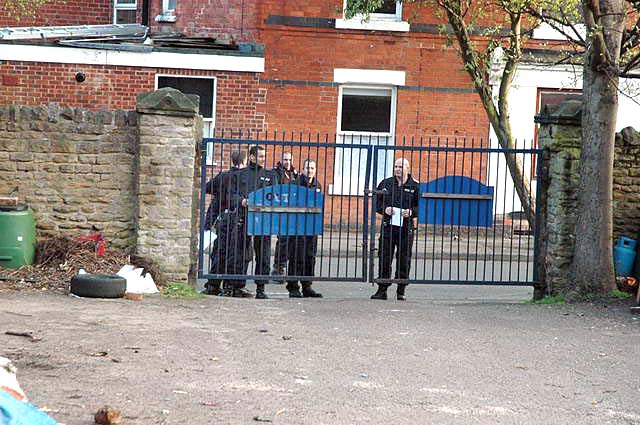 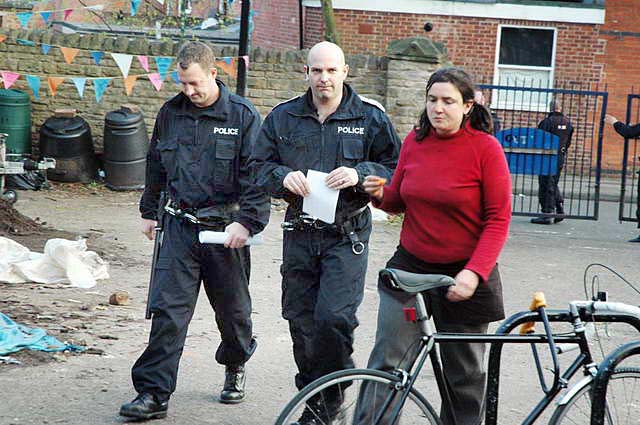 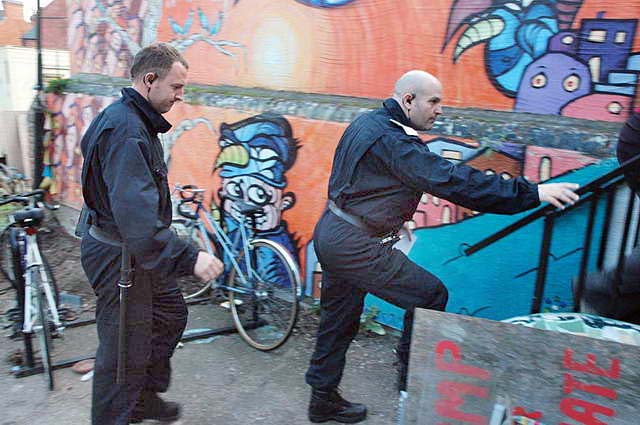 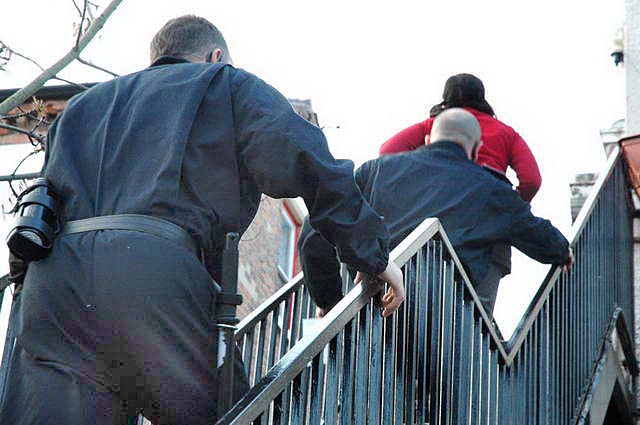 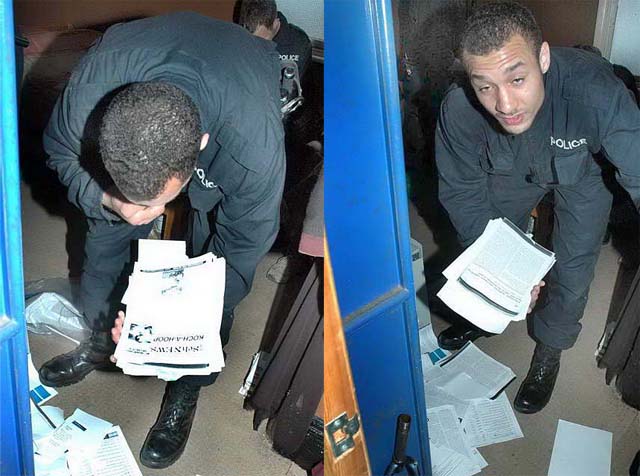 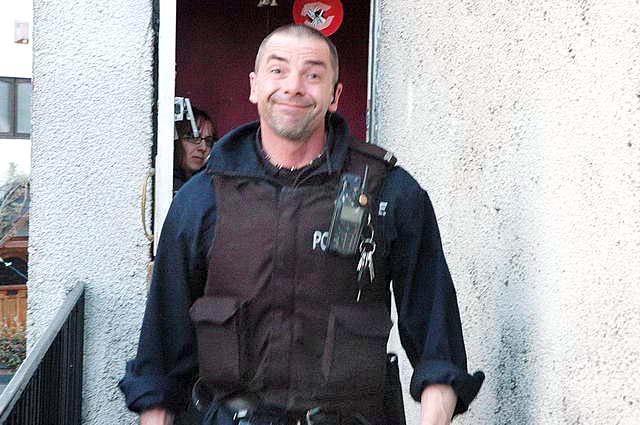 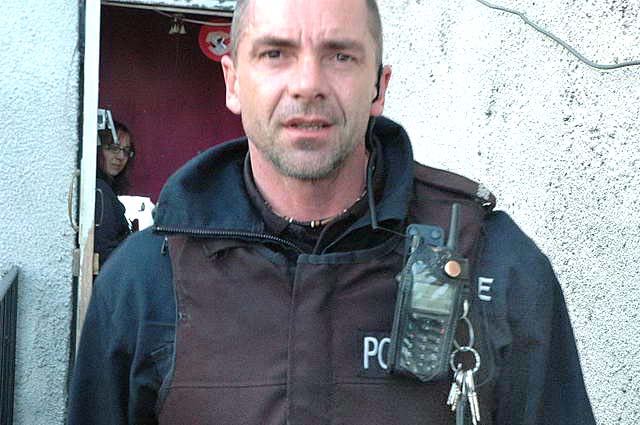 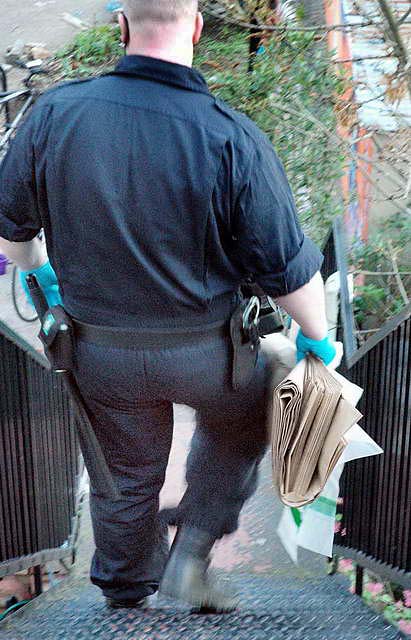 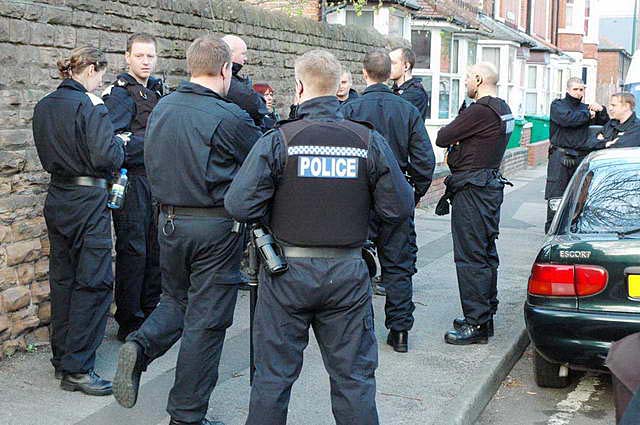 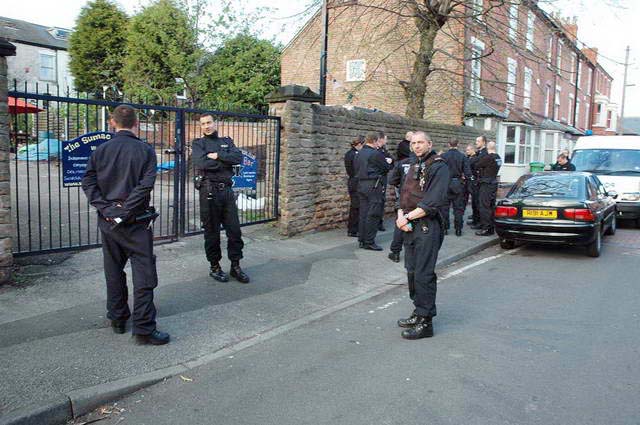 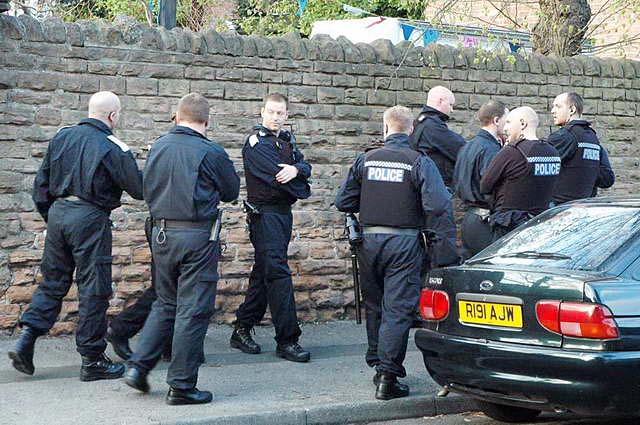 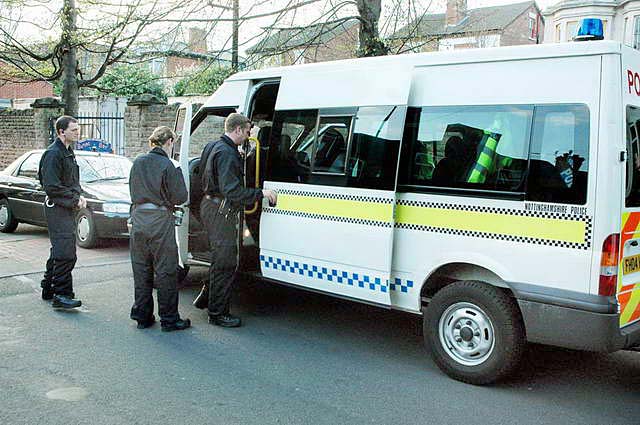 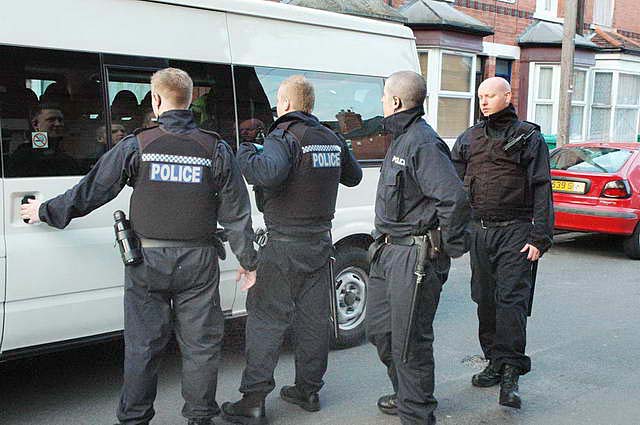 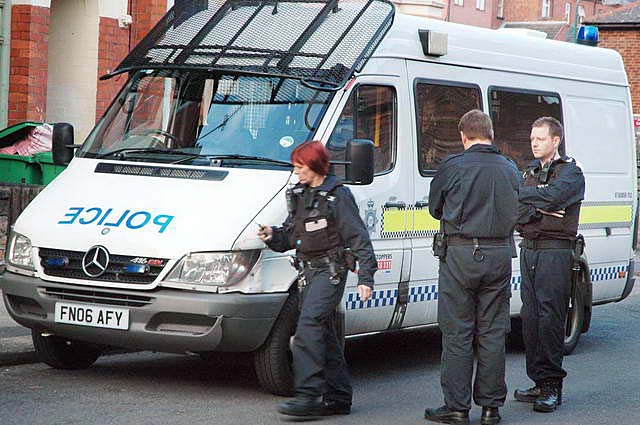 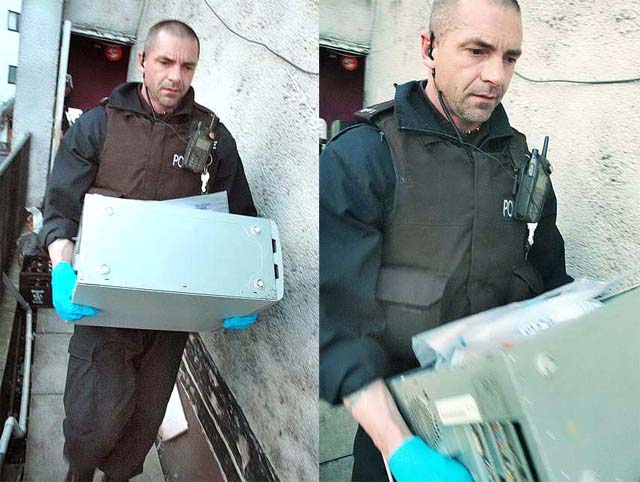 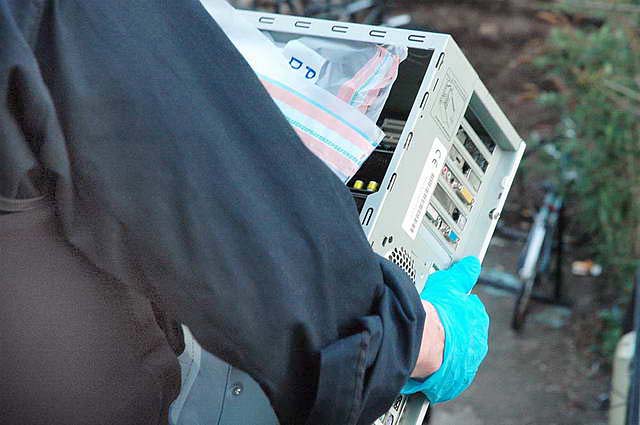 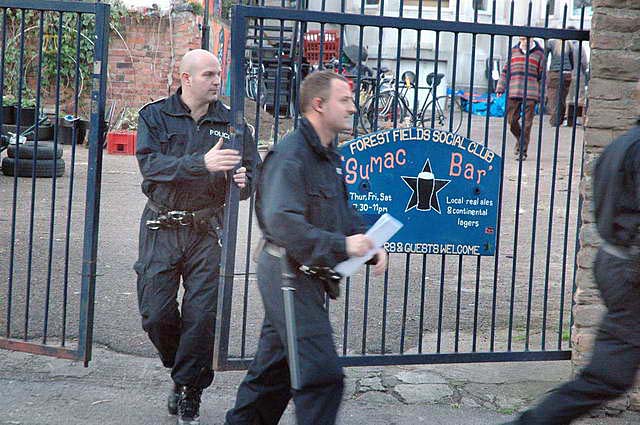 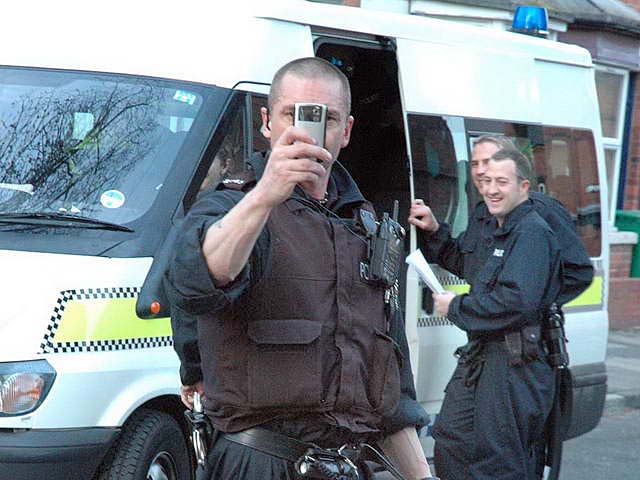 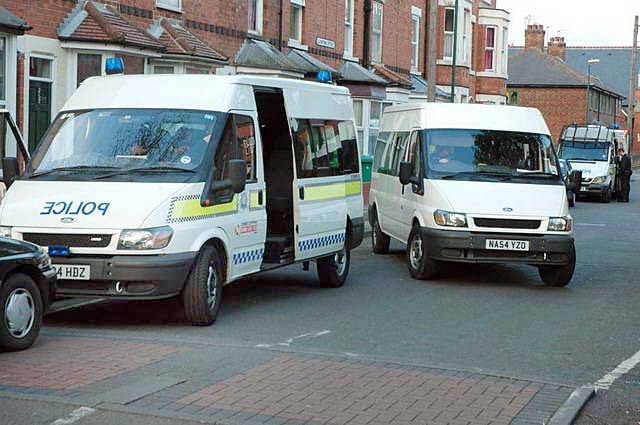 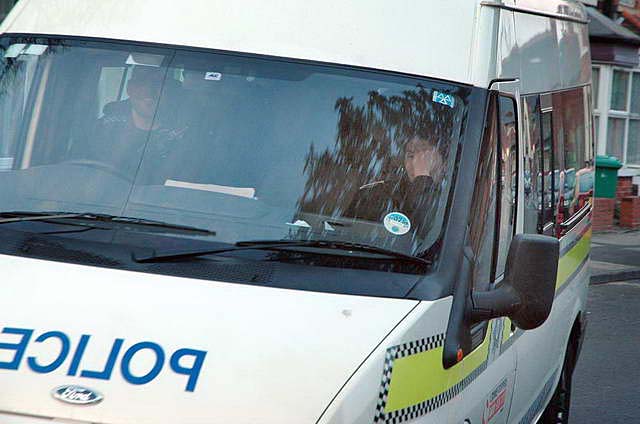 The addressess of some of those held in custody, were then to be seached under warrant. While chasing about, I knew of 6 locations in Nottingham, and probably many others around the country. I was asked and invited to be at the Sumac Centre, ahead of the expected arrival of the police teams.

Am I the only one that thought that coppers were meant to wear numbers on their lapels that identified them? It seems to me that there is far more criticism of protesters who wear hoodies and masks than there is coppers who don't wear identifying uniform - yet this seems to be becoming more common in recent years and not commented on at all. Quite a few coppers in the photos don't have badge numbers on display. And I've seen loads of this at the G20 (for example, this copper

If they are meant to be wearing numbers on their lapels, any ideas what to do about it? I would write to my MP, but I gather he's rather busy trying to work out if going into an MPs office means we're in a police state (we are, but mainly because the police are trying to shut down lawful protest and dissent, not because the police try to investigate if a law-maker broke the law himself), trying to justify voting for an illegal war, privatising everything (I'm amazed that more hasn't been made of Labour's recent plans to sell off (we called in privatising in the 80's) part of the Atomic Energy Agency -

http://news.bbc.co.uk/1/hi/business/7972293.stm), explaining why homeless people are feckless whilst claiming for a second home himself, worrying about gossipy emails that get sent around like the world's about to end. You know, just the important stuff. OK, rant over, but any ideas what we (I?) can do?

Heard on Trent police have changed their PRmessage,now its

"troublemakers would have cost us more if they had shut down radcliffe for a day"???
Rubbish, protesters would have stayed a day at most,maybe one or 2 might want to stay longer, but vunlikely.
They could have negotiated with a 2 dozen officers instead of 20 vans full plus reinforcements & all the detaining stations etc they took people too.
Stasi policing with the added spice of corruption-force from EON-RBS bosses on senior officers & politicians no doubt.

Heard on Trent police have changed their PRmessage,now its

"troublemakers would have cost us more if they had shut down radcliffe for a day"???
Rubbish, protesters would have stayed a day at most,maybe one or 2 might want to stay longer, but vunlikely. They could have negotiated people out, Radcliffe has weeks of coal piled up, 2 dozen officers instead of 20 vans full plus reinforcements & all the detaining stations etc they took people too could have been used.
Stasi style policing with the added spice of word in ears from EON-RBS bosses on senior officers & politicians no doubt, probably Mr Brown himself.

"Superintendent Mike Manley said there is a substantial amount of evidence to go through which could take weeks or months." this usually means we wont find any evidence to frame anyone, but in a few months it all will hopefully have died down & the media will leave us to get on with helping keep dodgy toxic technology & banking systems going.
"About 200 officers swooped on the Iona School in Sneinton", meanwhile many dodgy smack dealers etc around nottingham had a field day,they must love you.

""Mick Taylor, chairman of Notts Police Federation, has rejected claims that the operation was a waste of police resources. He said: "The fact is, it was a very last-minute thing. "They cancelled a lot of people's bank holidays. The majority of officers did not know what they were going to do before they got there."", undoubtly some of the police look ashamed to be there, seargants just look childish & senior officers poker faced, compensation!!!!!!!

If someone doesnt claim for it with support, they will try it again & again, we cannot let history repeat itself in tragedy then sad farce as someone once said

senior officers are suggesting trouble & danger to workers & protesters etc,v.vague.
I know people who have worked at Radcliffe & other power workers who have specialised in safety on places like this& are annoyed by police tactics.
Protest@rs act v afely & as democractically as possible, these facilities have red buttons all over them, believe me Ive visited afew of them with professionals

It doesn't matter what the subject is ..... Green Syndicalist has something to say. What a shame none of us ever understand what you're on about, and giving us your first thoughts (if that's what they are), every 20 minutes. Now, be a nice person and please go away, start a blog or something, and type your bilge into that. Enough. You're no bloody help. Troll somewhere else. Have you thought about the Evening Post?

a blog really, I would if I hadnt had computer probs. If you cant understand what Iam saying, thats your problem dear. Ive kept nazis from this site etc, I dont post inflammatory, irrelevant or off-topic messages in an online community except maybe in your opinion.
Controversial maybe, I should get paid for it or do less, but then truth isnt always a valued commodity today

I don't always agree with green syndicalist, but his/her point was that protestors normally act very safely, have taken the trouble to understand how a coal-fired power station works and the functions of its various parts etc. What's wrong with that?

I'm sure the people arrested have a far greater depth of knowledge of the subject than "senior police officers" and anti troll patrol put together. Would you know the difference between what is safety-critical and what is just an effective nuisance in a coal-fired power station? Thought not.

You seem to assume these people are incompetent idiots acting on emotion, rather than careful, analyticially thoughtful people acting rationally in a mad world. You might be best advised to avoid such projection.