Mayday! In The East Midlands

" It's important that we don't give up in the face of increasing economic uncertainty, an ever more authoritarian government, rampantly cruel capitalism and looming environmental disaster. Together, we can fight these monsters. I hope the positive, defiant atmosphere of May 2nd will help us keep strong to continue our struggles. "

We gathered at Brewhouse Yard on Saturday morning. Gazebos were hurried erected, and flags set flying. There was a large number of stalls from a variety of campaigning organisations and trade unions. Marchers were serenaded by the socialist Clarion Choir, and then set off for a short march along Maid Marian Way, Friar Lane, and along the side of the Square, returning by the castle and Robin Hood. The mood was upbeat as, preceded by a samba band, we waved banners, flags and placards as we marched. The welcome presence of a large contingent from the Communication Workers' Union, fighting to keep the mail public, and ably supported by Postman Pat, gave us a good presence on the streets.

On the newswire: Nottm Mayday 2009 - Thanks to all who came - a personal perspective | Chesterfield Mayday Photos 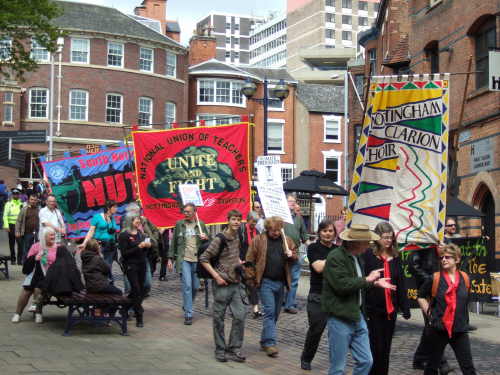 Amongst others, I spotted banners from the NUT (two), Clarion Choir, Notts IWW (Industrial Workers of the World), Shut Down H&K, Nottingham FoE, refugees, CND, the Trades Council, Stop the War, and four from the CWU. (Forgive me for any I've forgotten to mention.) Then there were placards and flags too. For some reason (all the overtime used up??) there was minimal overt policing.

We returned to Brewhouse Yard to be greeted by the music of Wholesome Fish. We heard speeches from the CWU, Alan Simpson, an environmental campaigner, Unison, The Free Hicham campaign, Notts Stop the BNP, Notts Anti-Militarism/Shut Down H&K, No Deportations, Regis (Zimbabwe) and Veggies. I know that some speakers stepped in at the last minute, and particular thanks go to them.

In between speeches, there was more music, all different but all enjoyable. We heard 1st of May Band (Banner Theatre), Ngoma and The Score (whose members are CWU shop stewards, and who delighted us with Teenage Kicks and Anarchy in the UK, etc). And as usual, we were well fed by Veggies - thanks to them for reliably turning up each year to make sure we don't go hungry.

For the first time, the media read our press releases and some turned up. There was an excellent piece on the 6 o'clock BBC East Midlands Today news. The Evening Post, however, reported that 500 posties marched around town.

So thanks to you all - everyone who brought a stall, all the musicians and speakers, the friendly people at Brewhouse Yard for letting us gather there, Veggies, the samba band, the Trades Council, anyone who picked litter or chucked money into the bucket, East Midlands Today for getting it right, and everyone who marched, and of course the police for leaving us in peace. Thanks to the unions who turned up, particularly the CWU - we wish them all success in their fight to stop privatisation - and we hope to see more unions marching next year. Huge apologies to anyone I've missed out - I'm sure I must have forgotten some - it's not deliberate, thanks to you anyway!