On May 20th at Nottingham Magistrates’ Court, anti-arms-trade activist Kirk Jackson was found guilty of aggravated trespass for his part in a protest that shut down an arms company for a day. Jackson was given a twelve month conditional discharge and ordered to pay £350 court costs.

The charge arose from a February 18th protest at the Nottingham warehouse of international arms company Heckler & Koch. Before dawn, four activists locked themselves to the gates, preventing employees from entering, while Mr Jackson and another activist climbed onto the roof and displayed banners accusing the company of "arming repressive regimes". 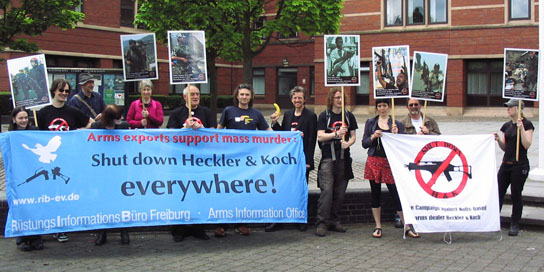 The defendant and supporters outside Nottingham Magistrates' Court

Heckler & Koch has been the target of demonstrations since 2007 when Nottingham residents discovered its presence on the Lenton Lane industrial estate. The company has a long history of supplying weapons to unstable regions, and using licensed production deals in order to evade arms embargoes. This was the first direct action taken against the company.

The offence of aggravated trespass is committed if a person does something while trespassing that is intended to obstruct or disrupt lawful activity. Mr Jackson argued that his only intention in displaying banners on the roof was to create a photo op for the attending media but the three magistrates accepted the Crown prosecutor's argument that he was in a "joint enterprise" with the activists locked to the gates.

The other five activists had already pleaded guilty and been sentenced on March 17th.

Mike Thornton, the Managing Director of Heckler & Koch was in court as a witness. He seemed nervous and avoided eye contact with the defendant and his supporters, but his performance was revealing: Having sworn to tell the whole truth, he baulked when cross-examined about his company's activities.

Most notably, when asked if his company carried out manufacturing at its Lenton Lane industrial unit, he looked very uncomfortable and asked the magistrates "Is it necessary to discuss that?" His response confirmed campaigners' long-held suspicions that the warehouse is used to assemble automatic weapons.

Mr Thornton was given a copy of the Shut Down H&K campaign’s December 2009 open letter to him and asked if he had seen it before. He admitted to having received the letter, in which serious concerns about H&K were raised, and to having made a conscious decision to ignore it. He did however concede that citizens have a legitimate right to protest against companies such as his.

Arms dealers love euphemisms and Thornton is no exception. He described his business as "defence sector", his lethal wares as merely "product", and when asked about the impact of the protest, he said "we were held back in what we were trying to achieve." Spectators were struck by the similarities between Mr Thornton and the villainous arms company execs from Jean-Pierre Jeunet's recent film Micmacs.

The prosecution's police witness was Chief Inspector Stephen Haylett, who characterised the protest as "about as good-natured as they get". This left the prosecution struggling to convince the court that Thornton was a victim of intimidation. In his statement, the arms company boss claimed that the protest left him feeling "vulnerable and intimidated." "It was not known if [the protesters] were armed with any type of missiles," said the man with the warehouse full of guns. (In fact, the reams of police video footage played in court showed the defendant wielding nothing more threatening than a cheese & pickle sandwich.)

It was Chief Inspector Haylett who told the activists on H&K's roof that their banners would be returned, but in court he claimed that he couldn't remember this, and so the bench agreed to the Crown's somewhat vindictive request to destroy them. Fortunately, the campaign has already received a replacement banner from fellow anti-militarists in Germany.

Despite the disappointment of a guilty verdict, Mr Jackson remains positive. "I'm glad I took the case to trial," he said. "Companies like Heckler & Koch are profiting from war and repression with the support of the UK government. The arms industry must be opposed."

Mr Jackson and the other five activists have been left with a total of £825 in fines plus costs but this is a fraction of the cost to the company of being closed down for a day. On an average working day, Heckler & Koch's Nottingham unit exports over £35000 of arms and makes more than £12500 profit.

If you would like to help the activists to pay their costs, you can donate via the Shut Down H&K website.