Join the ongoing resistance at Balcombe

Attempts by Cuadrilla Resources to begin exploratory drilling for gas at Balcombe, West Sussex on a temporary licence that expires in September have met with strong resistance by locals and environmental activists from around the country who have come together for The Great Gas Gala. The start of drilling, for which Caudrilla has a very small window, has been significantly delayed by the action in spite of excessive and repressive policing, a camp has sprung up, support by locals for direct action is reported to be over 80% and the resistance continues. Planned events at the camp include a 'meet the locals' tea party on Sun 4 August, a day of artistic resistance on Sat 10 August and a 'Gas Gala' on Sun 18 August.

On the newswires: Whose streets? Cuadrilla's streets! | No Names, No Frack Drill | Frack Free Somerset in Solidarity with Balcombe blockaders | Ongoing blockade of Fracking Site | Resistance Call-Out for Balcombe | Meanwhile, in Scotland 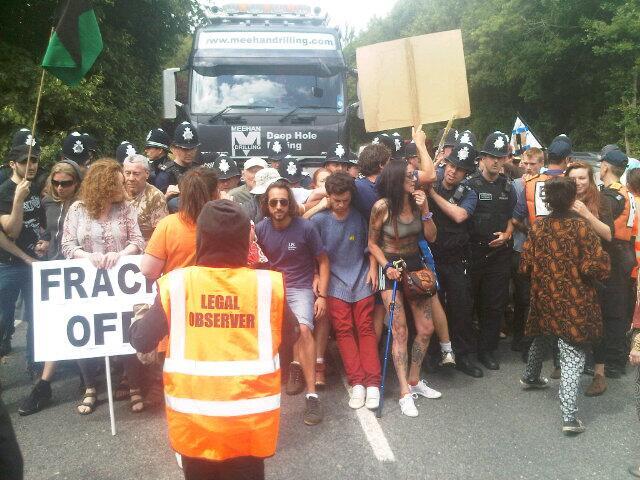 "Cuadrilla are exploring for tight (shale) oil, and the Kimmerage Clay shale layer they are targeting is similar to the Bakken Shale in North Dakota. Full scale production would involve thousands of wells, pipelines and compressor stations coating the Sussex countryside. This is before you get to water contamination, air pollution and accelerating climate change."

On the first day of the Great Gas Gala, Thu 25 July, over 250 people stopped 15 trucks bring on equipment. Fri 26 July saw more than 100 police used to eventually break the blockade and escort the first trucks onto the fracking site with some arrests. On Sat 27 July the community continued to resist attempts to force trucks through. With the blockade growing by the hour, the cops announced at around 3pm that there wouldn't be any more deliveries for the rest of the day. Cuadrilla did not attempt to bring any trucks onto the site on Sunday 28 July and with the camp continuing to grow, efforts were concentrated on building showers and toilets.

On Mon 29 July, Cuadrilla continued to try to push trucks through the blockade with the help of the cops and the community continued to resist. A heavily pregnant woman attempted to stop one of the trucks and was pushed out of the way by the cops and a man was assaulted and injured during arrest. By Tue 30 July, the Camp was reported to be still going strong with renewed efforts being made to defend Balcombe and increasing numbers of cops being used to break the blockade. Wed 31 July saw cops again massing around vehicles to get them onto the site, but this was stopped for two hours when two people superglued themselves around the gate. An old fire engine was used to blockade the entrance to the site on Thu 1 Aug and was eventually towed away with people still locked on inside. Community groups from Fylde joined the camp on Fri 2 Aug and there were mainstream media reports, eg. in The Guardian that Cuadrilla had started exploratory drilling. On Sat 3 Aug, cyclists taking part in the 'Big Race' from London and Brighton arrived at the camp, hundreds of villagers joined the blockade and the results of their survey were announced: only 6% of villagers in favour of fracking, 9% undecided and 85% against.

"The local community resisting fracking at Balcombe now has its own website Frack Free Balcombe:

The community of Balcombe has developed this website to provide the local residents and concerned individuals from further afield with the information necessary to make an informed decision regarding the resistance by over 82% of the local community to the current attempts to explore for oil and shale gas at a drill site which is less than one mile form the centre of the village, next to the main London to Brighton trainline, and involving a horizontal drill that will be extremely close to the Ardingly Reservoir that supplies over 85,000 people within Sussex with their drinking water supply."

Balcombe is only a 25 minute train-ride north of Brighton, and 39 minutes south from London. Some but not all trains on the Brighton – London line stop at Balcombe. Trains run every hour from Brighton and London Bridge and it is also possible to catch trains from London Victoria, usually changing at East Croydon. The site is a 5 minute walk from Balcombe Station. More information about the camp here and the issues here.