George W Bush and his 700 hangers on have now arrived in the UK for his state visit. Last Saturday saw a 1,000-strong demonstration in Sheffield City Centre and now he's here Sheffield folks are keeping up the pressure. 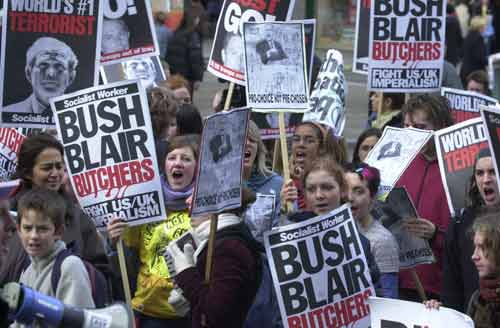 The major focus of the day's action was in London. This does not mean however that people in South Yorkshire for the day were no less furious at Bush's visit. In Sheffield, Sheffield Stop the War Coalition called for a demonstration aginst the visit outside the Town Hall and were joined by over 100 students. The group processed along Pinstone Street chanting and expressed their anger at Furnival Gate by a sitdown causing traffic disruption.

In Barnsley a 'straw man' Bush statue was toppled from an empty plinth, mirroring the toppling of the Saddam statue in Bagdhad on 09 April 2003. A fuller report of South Yorkshire actions has been posted.

No Sheffield reports of London actions as yet. But much can be gleaned from the main UK site. It is known that samba players were involved in the slow procession down Oxford Street 'escorted' by the Metropolitan Police. This part of the day's events were reported in the 19:10-21:55 section of the London timeline. Photos and videos have come in from elsewhere of this part of the day's activities.

At 1100 in Trafalgar Square, the proposed assembly of school students was described in Government crushes school student dissent?.

However Trafalgar Square didn't just contain a few school students. Other folks were up for a little creative disobedience. The fountains reminded passers by of the blood on Bush and Blair's hands.

By mid-afternoon, many protesters were getting a little peckish, so tea and cake seemed to be a great idea. Where better to have a tea party than Buckingham Palace? Lizzie and Dubya didn't seem to be in a very welcoming mood though [report & pictures].

Meanwhile, the sambistas were having a roaming street party. Starting at ULU on Gower Street, the party also disrupted traffic on Tottenham Court Road and Shaftesbury Avenue, before arriving at Trafalgar Square for the end of the women's action. This action was massively over-policed, one passing Londoner "was astonished how small the demo was after seeing the massive entourage of cops and vans". 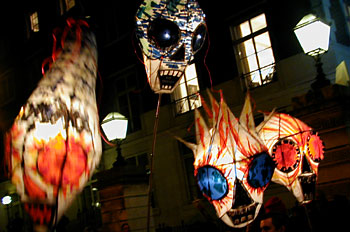 A group of Sheffielders attended the 3,000-strong Burning Planet March, organized by Campaign Against Climate Change which left Lincoln's Inn Fields at about 1930, ultimate destination: the American Embassy via Esso/Exxon HQ at Aldwych. The Samba Band joined forces with London's Rhythms of Resistance.
[report | report and pictures]

One of the Sheffield Samba Band who went down early to meet Dubya reports Police tried to follow me home. A taste of things to come perhaps.