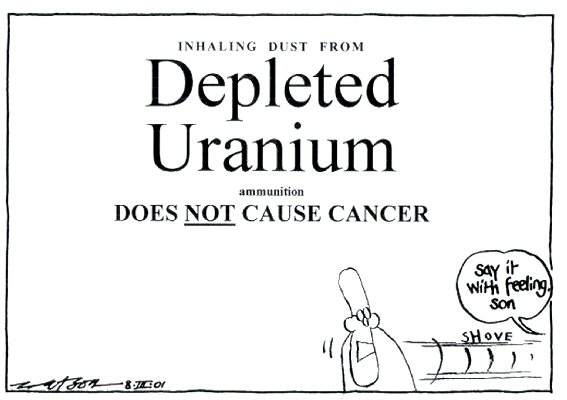 “A soldier who moved Iraqi tanks hit by depleted uranium shells in the 1991 Gulf War has become the first to win a war pension appeal for exposure to the material. The Pension Appeal Tribunal Service said the ill-health of Kenny Duncan, of Clackmannanshire, was due to the work. The National Gulf Veterans and Families Association said the verdict added weight to calls for an inquiry into war illneses.”

“After the Gulf war Iraq was not allowed the equipment to clean up its battlefields. More than 1 million rounds of weapons coated in depleted uranium (basically nuclear waste) were used by the allies during the war. As much as 300 tonnes of expended DU ammunition now lies scattered throughout Kuwait and Iraq. Depleted uranium dust gets into the food chain via water and the soil. It can be ingested and inhaled. Prolonged internal exposure leads to respiratory diseases, breakdown of the immune system, leukaemia, lung cancer and bone cancer. Cases of cancers in Iraq have risen tenfold since 1990. If cancers continue on the present upward curve, 44 per cent of the population could develop cancer within ten years.”

5, 6 years ago i saw a report that a friend had received from an american agency, outlining various resolutions to there problem of what to do with there low grade nuclear waste, one of these was the idea of including it on bombs to be spread around the world. No lie!!!!!

... now they really are at the forefront of cutting edge medical technology, aren't they?

and for the 238th time, depleted uranium is not nuclear waste - high level, low level, or any level. It's stuff dug out from the ground.

Sceptic you are talking shit:

"depleted uranium is NOT nuclear waste? It is stuff dug out of the ground."

Depleted Uranium is a waste-product of the Uranium Enrichment process. It is not dug out of the ground pre-depleted; the 'depletion' happens during an industrial process, so it IS nuclear waste.

It is radioactive, (around 30% less so that natural Uranium). It is also chemically toxic, its a poisonous heavy metal. Think Lead is safe to ingest? Well DU is much worse.


In 1996 a UN Human Rights tribunal classed DU as a 'Weapon of Mass Destruction and Indescriminate Effect' (IDUST). Just because it kills indescriminately over generations doesn't make the mass destruction it causes any less inevitable, at best its a 'Slow WMD'.

At a chemical level alone it is a dangerous substance, when ingested the alpha radiation it emits makes it more dangerous. Symptoms encountered by both US/UK forces and Iraqis have shown remarkable likeness to radiation sickness and heavy metal poisoning. Children of US troops have experienced similar birth defects to Iraqi children, in higher incidence than normal.

Remember for years the scientific community was 'divided' (i.e. some were sponsored by the industry) over the possible health effects of tobacco. Lead pipes were used for years for Britain's mains water supply.

Its a bit vague otherwise.

maybe you should study the facts

which are outlined in the attached pdf files. But then, your mind might be too closed.

‘Depleted uranium will affect Iraq for generations’
Interview by Ahmed Mansour of Al-Jazeera with Major Doug Rokke, former chief of Depleted Uranium Project at the Pentagon.

Major Doug Rokke fought in the Vietnam war, later obtained his PhD in nuclear physics and after fighting in the Gulf War was given the task of cleaning up depleted uranium in Saudi Arabia and Kuwait. He says he suffered the effects of depleted uranium from the first week of the Gulf War in 1991 but only realised it in 1995. Tests showed that he had 5000 times the normal level of radiation levels in his body, enough to light up a small village. He has respiratory problems, problems with his immune system and has had 15 operations on his liver. In a memorandum from the Los Alamos national laboratory he was told that they knew of the health problems associated with depleted uranium but he was told to lie about the health and environmental effects. The reason to lie is to avoid liability for the use of uranium munitions in Iraq, Saudi Arabia, Kuwait and the Balkans.

Problems were firstly respiratory and skin rashes from metal poisoning, as if you had eaten a litre of toxic metal. Later tumours developed in any area where shrapnel had lodged. 140 US veterans of the first Gulf War die every month and approximately 10.000 have died to date. He says that the use of depleted uranium is a crime against humanity and should be considered a war crime. A former scientist carried out studies in the US and found that the uranium contamination from uranium production plants in the US caused adverse health affects within a 50 km radius. The wind carried dust from around the plants in sufficient quantities to cause higher incidences of illnesses such as cancers, kidney problems, neurological problems. The presenter mentioned that the uranium dust from bombs dropped in the Balkans travelled more than 1000 kms and reached lots of european capitals. Similar scenario will be seen in countries surrounding Iraq. According to Prof Rokke, the air, water and soil in Iraq are all contaminated from the first Gulf War because soldiers have been going there since 1991 and returning ill. He calls for depleted uranium weapons to be banned.

... can't see how they remotely justify the use of DU in weapons systems ..

... in fact, some of the figures in them need 'absorbing' by you!

Such as, the fact that naturally occuring uranium ores are anything from 0.04% to 0.11% uranium. Compare that to the densily milled solid DU warheads that fragment and powderise on impact which are in order of magnitude 100 times more concentrated.

For more on the weaponisation of DU try:

or for more links and detailed analysis on the human consequences:

Now, troll, stop baiting and bury your head in the info rather than you back passage.

no, no no, big troll

concentration of uranium from the German paper:

"the cumulative 'population dose' resulting from the disperal of hundreds of tons of DU ... coluld result in up to ten cancer deaths."

I notice that none of your sources are referenced at all. Compare that to the references quoted in the two papers I have posted.

If they are mysterious, then by definition you cannot say they are caused by uranium.

I notice that another of your sources is Islam OnLine - a source well known for its medical and scientific expertise. I also note that it fails to name the "NATO sources". One of the problems with the Internet is that none of its publications are peer reviewed - scientifically and academically, they are then worthless.