Press hysteria and propaganda around this years Mayday has been mounting over in Ireland, where the latest headline to hit the streets revealing that troops will be drafted in to "Put Down" EU protests!

All of the media reporting so far about Mayday in Dublin has concentrated almost exclusively on "violent" protesters, while no evidence has been presented of a real risk of violence, and barely a mention has been made of the reasons that people will be protesting.

The media madness will be familiar to those who have followed the sad excuse for journalism rolled out every year, for the last four years, ahead of Mayday protests in London, which has been riddled with factual mistakes, bare faced lies, so called intelligence from so called "intgelligence sources", and quite ridiculous claims.

So far this years coverage from this side of the Irish Sea has focussed on the "Mayday Cancelled" statement from some members of the Mayday Collective, which says that the usual large autonomous protest in London is not being planned this year by the Mayday Collective, and explains some of the reasons for that, citing increasing levels of police repression, and calls for a more open dicsussion of politics and goals. Thus far coverage from the BBC and the Evening Standard has failed to mention the Mayday EU events in Dublin (see reports 1, 2).

Events in Dublin framed as "Say no to Fortress Europe - A Mayday No Borders weekend", include a week of cultural events, exhibitions, screenings, workshops, and much street theatre and visual actions focussing on asylum seekers and refugees, housing, recycling, anti-war and public/private space. There's also a Critical Mass Bicycle protest, a Noise protest at the EU Ministers Dinner, a No Borders Camp, and a Reclaim The Streets Party (see Audio/Video).

The usual Dublin Mayday march by Trade Unions has been cancelled, making way for the official EU enlargement celebrations, however the Another Europe is Possible Coalition will still be demonstrating on May 1st with a carnival parade in central Dublin. Meanwhile the BBC/RTE 10,000+ "Beautiful Night" concert has been cancelled after the Irish Cabinet decided the closure of O'Connell Street and adjoining areas for five days before the event would be unacceptable.

Indymedia Ireland will be reporting the protests, as well as holding a series of events entitled "Another View of Europe" (April 23rd - May 3rd), including screenings, exhibitions and workshops from the European Independent Media network, with a major theme being Independent media from the countries joining the EU, as well as events at the Sustainable Living Convergence Festival.

In London plans for the traditional TUC backed Trade Union march are going ahead, assembling at Clerkenwell Green at 12 noon and marching to Trafalgar Square where there will be speakers from the Stop the War Coalition, Globalise Resistance and Ken Livingstone, the Mayor of London. There has also been a Disarm DSEi Mayday Action call in London for April 30th [Flyer]. There are also plans for Mayday events in other towns and cities across the UK, including Lancaster. 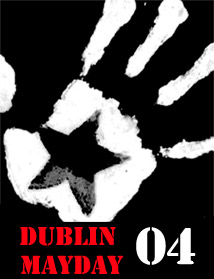 The official EU 'Day of Welcomes' in Dublin will also see a huge fireworks display on 30th April, an outdoor, free 'European Fair', with themed welcome events in 10 other towns and cities around Ireland.

Mayday, May 1st, or Beltane, was originally celebrated as the arrival of spring, encompassing ancient festivals of renewal, hope and transformation, celebrated for thousands of years.

During the struggle for the 8 hour working day things came to a head with an enormous strike across the United States on May 1st 1886, after which several of the Anarchist organisers were executed, representing a turning point in late 19th century radical politics.

Soon after this and May Day was adopted as International Workers' Day, by the International Labour Congress and has been celebrated across the world ever since.

May Day has always been the people's day. Throughout history religions and governments have repeatedly sought to subvert and usurp the meaning of Mayday......

nb: due to the move to the MIR codebase last year the archive of reports is still slightly scattered around in several places, but most is accessible