REED's head office in the Netherlands was decorated with slogans and found it's locks glued last night. A translation of the press-release follows:
--- Onkruit press release ---
Maarssen, March 21st 2005

Following the call for an international action day against DSEi, one of the worlds biggest arms trade fairs, Onkruit has decorated the dutch head office of Reed with slogans and glued their locks last night. DSEi is organised every two year
s by Spearhead, part of Reed International. By organising this fair, where not only conventional weapons but also mines and clusterbombs are traded, Reed profits from mass murder. There is no possible excuse for this and we demand that Reed shuts down all it's affairs in the military sector. Apart from that we make a call to everyone to travel to London from september 13th till 16th to join the protests against DSEi.
Apart from their involvement in DSEi, Reed also organises ITEC, a military fairthat will be held from 26th till 28th of april in Amsterdam. Once again bloodshed is no objection for Reed to make profit. Although no 'real' arms are traded at ITEC, the warsimulation-equipment that this fair focusses on is an essential aspect of war preparation. More actions against ITEC are organised, starting with a manifestation and blockade on the 26th of april at 13.00h in front of hals 9 and 10 of the RAI, Amsterdam. We call for everyone to join in and organise further actions.
No blood for profit! Destroy the arms fairs!
---
Onkruit is not an actiongroup, but a group of actions. The name can be used freely for any anti-militarist direct action.
The Onkruit support group is a collective that wishes to support Onkruit actions and the antimilitarist struggle in general.

More information on DSEi can be found on:

http://www.dsei.org
More information on ITEC can be found on:

I will be attending the ITEC event as a substantial amount of the conference is related to training and safety within the rail industry. I suggest some more research on your part before action of this kind

Including three workshops about railroad safety is no excuse for a fair where warpreparation becomes reality. We presume you do not wish to be associated with these kind of activities and recommend you hold your workshops at another venue. Otherwise, see you at the blockade!

I'm not the one who is holding the workshop, I am attending it. Yes there are military people there but the reality for those of involved in Rail safety and training is that the same compnaies who provide Rail training also provide military training. What would you suggest we do, stop training for rail staff because we don't like the organisations who provide it ?

Some of us have to live in the real world and don't have the luxury of your moral high ground on which to look down at the world.

And their lickspittles too

Remind us where the Aslef offices are

moral high ground does not exist

saying you cannot afford to join people on the moral high ground is a cop out. its a way of appeasing your guilt and hiding from your shame. it is viable to find other ways of working that do not involve assistance from people who actually enjoy seeing increases in global conflict, people who see another death as simply another tick on the "air to surface missile" or "assault rifle rounds" order sheet. you have a choice, its just about how hard you want to work for it.

Rail training in the UK and the rest of the EU is provided by organisations who are also involved in defence work - you may not like it, I know I don't but that's the world we live in.


Wait until you leave university and live a little. Until thing don't pontificate on matters you don't understand.

"Wait until you leave university and live a little. Until thing don't pontificate on matters you don't understand."

Yeah - thats probably cos in the real world we have a bunch of fat cat unionists without balls.

Besides the fact that there is nothing in El Gormo's post to suggest s/he is a student - Tony and cohorts provide no explanation of why they aren't insisting that training is provided in a non-militarised environment.

Why not remedy that now?

The silence of the suits

So, any of these "pragmatic" suits ready to say why unionists won't stand up to warlords, warmongers or war-profiteers.

Seems they still like to celebrate the ones who used to:

"Last month Chinese railway workers marked the 82nd anniversary of
the Great Strike of 7 February 1927 to demand workers’ rights and
freedom from the oppression of northern warlords. Scores died at
the hands of strike breaking gunmen. Warlord Wu Peifu, backed by
Japanese forces, suppressed the strikers, resulting in the February 7
Massacre. Lin Xiangqian, president of the Jiang’an branch of the
Jinghan Railway Trade Union, and Shi Yang, a union legal adviser,
were killed by Wu’s gunmen and more than 1,000 workers were
also fired after the strike. Our picture shows the memorial relief."

In 2005 Aslef shop stewards are going to be on the wrong side of the barricades.

Apparently they think that "growing up" means having no conscience 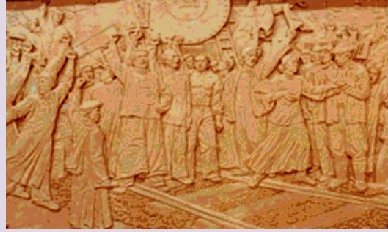 Come on Tony! in your opinion, what is the real world? you think it's extra terrestrial to believe that workers can demand a change in company policy? sure, its going to be hard, nobody's saying it isn't going to be. but the fight must continue. if we can't make things better, whats the point?

i'm not here to wait.