Report of week of action against Iraq Pillage

The first days of April were designated a `Week of action against the corporate pillage of Iraq' by a group known as the Corporate Pirates [Website | Email ]. We report back on how that week of action has gone... 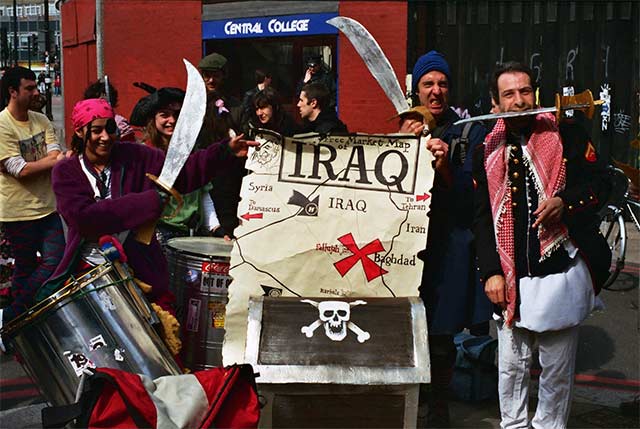 Since the war on Iraq ended, foreign corporations have been eyeing up the rich natural and human wealth in that country. The Coalition Provisional Authority led the charge; whilst Iraq was still legally under occupation the CPA passed Order 39 which allowed for all public companies in Iraq to be privatised except for those concerned with natural resources. This despite the fact that occupying forces are bound by the Hague Regulations of 1907, regulations which explicitly forbid this kind of order. [More details: Guardian article | IndyMedia feature | legal briefing]

How to take action against this corporate pillage? The Corporate Pirates have decided to target a company called Windrush Communications, organiser of the Iraq Procurement Conferences. These conferences were targetted by activists in 2003 [feature | short report] as they are places where companies get together to discuss and sign contracts which exploit the wealth of Iraq, without the say-so of the Iraqi people. Windrush was targetted again last December [action photos | action reports 1, 2].

The week kicked off with an April Fool's Pro-Pillage party outside the offices of Windrush. Around eighty people turned up in pirate costume to protest against the corporate piracy of Windrush. Reports: [1 | 2] Pictures: [1 | 2 | 3].

On Saturday people participated in training for Non-Violent Direct Action. Watch out Windrush! Then on Monday an open meeting was held with four speakers: Yaser Hasan (Jubilee Iraq), Haifa Zangana (Iraqi writer, exiled by from Saddam’s regime), Tim Woolrich (London Rising Tide) and Yasmin Khan (Corporate Pirates). We hope to be able to link to audio and a full report of the meeting soon.

Tuesday was an eventful day. It started with a candlelit vigil outside the Windrush Offices, remembering the victims of this war, a war of greed and power. Later that day activists attempted to disrupt the news broadcast announcements of the election with an anti-war message. The three main parties are not interested in talking about the war during the election campaign as none of them have stood up strongly against it; surely though the deaths of 100,000 people should affect our response to the election... Tuesday ended with a creative forum at the Rampart Social Centre; twenty people enjoyed films and discussion on the subject of corporate activity in Iraq.

On Wednesday activists bade farewell to Windrush with a noon protest. But beware, Windrush, for the pirates will return! Your crimes of pillage and exploitation will receive their just desserts; you will be held to account!