At least 200,000 demonstrators from very different backgrounds, ranging from religous organisations to samba bands and the Infernal Noise Brigade to the Clown Brigade, joined today's Make Poverty History march in Edinburgh. The organisers had called for people to wear white clothes. The march was set up with staggered starting times, but because of the number of people and small funnelled start gate many were unable to join the actual march. Report
Photos: [ 1 | 2 | 3 | 4 | 5 | 6 | 7 | 8 | 9 | 10 | 11 | 12 | 13 ]
Video: [ Interviews
Audio: [ interviews | speeches ]

Before the start of the official march, residents of Craigmillar, the most deprived area of Edinburgh, joined with anti-G8 protestors camping on a park in their estate. They marched through the estate to show their opposition to poverty here and abroad.

An anti-capitalist block broke away from the main march and was cordoned off by riot cops. People are being released in small groups, others appear to be held and photographed under a Section 60 order (which police later confirmed was applied to whole city centre). There are two possible arrests. [ timeline | report]

Other events happened during or after the official march (and we're not talking about Live 8). Faeries moved about the march, as did detatchments of the Clown Army (Photos: 1 | 2). Break Dancers gathered in Bristo Square in an attempt to 'Break Poverty' (photos). Capitalists marched in support of the G8 [1]. An impromptu street party (photos) on one of the roads closed for the march, with samba and music from the Infernal Noise Brigade, lasted until midnight. At that point, police moved the party to the nearby Meadows in order to re-open the road, resulting in one arrest. 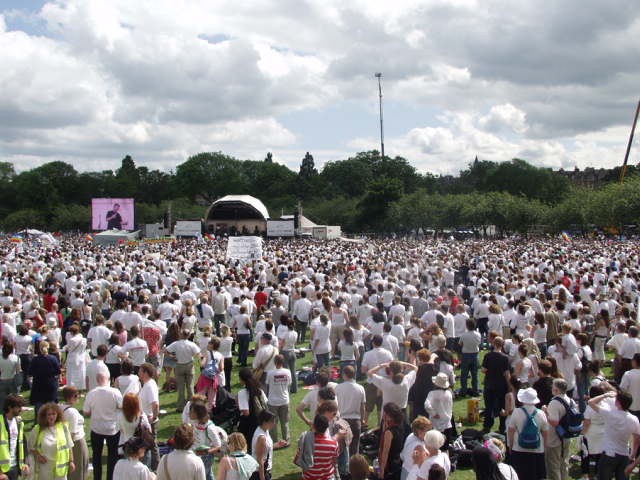