Almost a month after the EZLN announced a Red Alert in all the autonomous Zapatista communities, the Clandestine Revolutionary Indigenous Committee – General Command of the Zapatista Army of National Liberation announced on July 11 that "with the completion of the internal consulta the EZLN has decided to lift the Red Alert which it has been maintaining since June 19, 2005". The EZLN also informed that "the Zapatista Caracoles will be reopened" and that "the different Good Government Juntas will also once again begin their work in their respective headquarters". [ Read full Communique ]

This follows a period of internal consultation with the Zapatista autonomous municipalities and support bases, where "meetings and assemblies were held in more than one thousand indigenous communities in the southeastern Mexican state of Chiapas". On June 26 a new Communique announced that "the results were that more than 98% approved the new step, and less than 2% decided not to support the proposal", and that over the next few days, the EZLN would make public a series of texts which would form the "Sixth Declaration of the Selva Lacandona."

On June 29 the First Part of the Sixth Declaration of the Selva Lacandona is published. This is followed with Part 2 in which the Zapatistas describe how they "see what is going on in the world and in our country", and Part 3 that not only states what the Zapatistas "want to do in the World and in Mexico" but also how they are going to go about doing it.

On July 13, the CCRI-CG of the EZLN publishes two further communiques in which the Zapatistas explain the "Ways and Means" of the new phase of the Zapatista struggle to all those "individuals, organizations, collectives, groups and associations of the left who support what has been proposed in the Sixth Declaration of the Selva Lacandona". 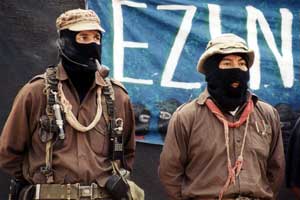 Since the EZLN made public the Sixth Declaration of the Selva Lacandona, national and international civil society has been discussing and debating the document and the new political initiatives that the EZLN proposes.

Below there are a few reactions, analysis, comments and critiques that have been published recently about the Zapatista's Sixth Declaration. These are all in Spanish language, so please use the comments link to add any texts or reactions in English to the Sixth Declaration that you may know of.

On the other hand, the Solidarity Collective with the Zapatista Rebellion of Barcelona called for an European Zapatista Encuentro from the 22 to the 24 July to discuss the Sixth Declaration in the context of European Zapatismo [ See Open Forum and Proposals (Sp) | Read summary of the Encuentro (Eng) ]