From 5th to 13th August, over 100 activists gathered for a week of discussions, socialising and action at the Prekär Camp 2005, an action camp raising issues of precarity, and its impact on daily life and social movements, near Lüchow, north east of Hamburg, Germany.

On Wednesday 10th August, activists from the camp evicted a local social benefits office in Lüchow of its executive, who is according to activists "well known for his strict and inhuman interpretation of the new german labour and social security benefit laws". The following day, police raided and searched a house for an alledged call for criminal offences on the pracarity camp's website. It has now become clear this was in relation to the use of the word 'Yomango' on the website.

The offices of 'Anti-Atom-Aktuell', a monthly grassroots magazine on anti-nuclear issues, were also affected by the raid. They have given out a statement, explaining they are unable to work as equipment and papers have been seized. Some people say the police intentionally raided the offices of the magazine in an attempt to repress media activists. Furthermore, Anti-Atom-Aktuell being a prominant source of information within the anti-nuclear movement, the repression against the magazine, located in the region of the Castor-Protests, is considered by some as an attack on the movement in general. Early July, german police also raided the offices of LabourNet; a german website adressing issues of (un)employment and precarity. 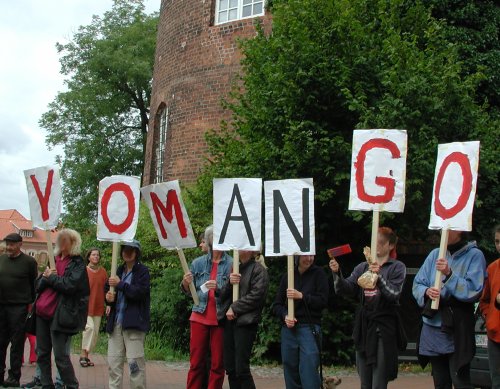 A court order states that: "on the website the term 'Yomango' (a spanish slang term for 'I'm stealing') is used and in a preliminary program for the camp presented on this website a 'Yomango-action' was mentioned." About 30 policemen, searched and filmed the entire house for several hours.

Yomango, like the popular Spanish clothing chain Mango is now a brandname which is not so much about selling concrete stuff, but more about 'promoting a lifestyle'. Yomango, meaning 'I'm stealing' in spanish, has triggered a wave of actions as part of a new anti-consumerist lifestyle. More info on the Yomango website.

Some refer to many recent attempts to repress media activists in doing there work. Both Indymedia UK and Indymedia Bristol had their servers seized in the last couple of years. Italy-based non-profit community webserver 'Autistici' was also attacked. They found out that the authorities had copied the keys necessary for the decryption of their webmail (statements: [1] [2]) and potentially had access to all the data on their disks.