2nd part of a two part report on today's day of action at dsei included a critical mass ride from the city to the excel centre, with very successful reclaim the streets moments throughout, and a chance to harangue delegates on several occasions 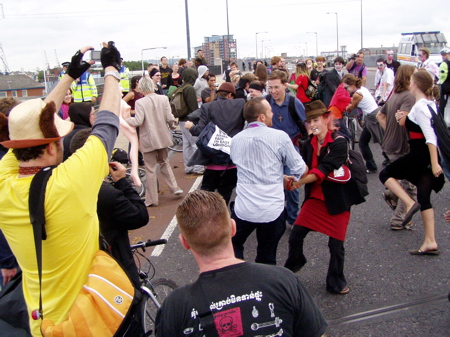 21 square dancing on the bridge 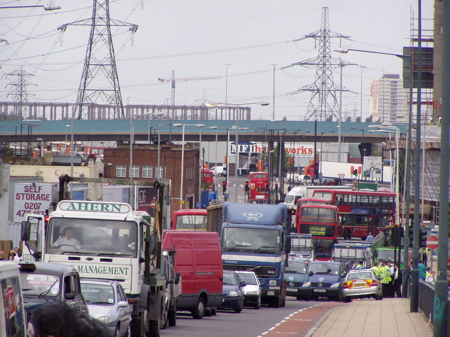 22 backs up the traffic 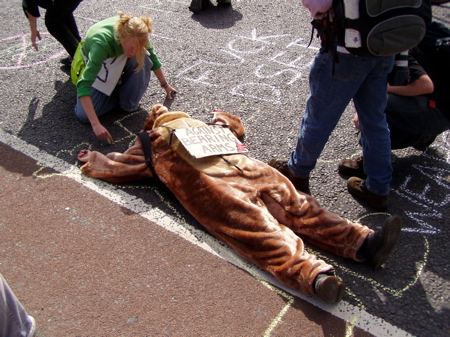 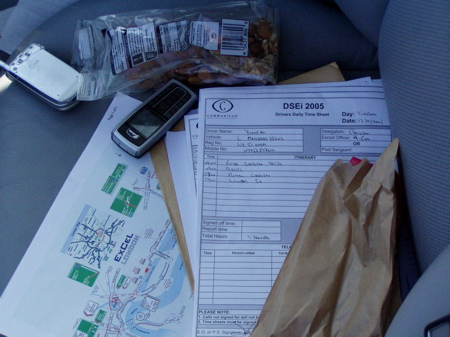 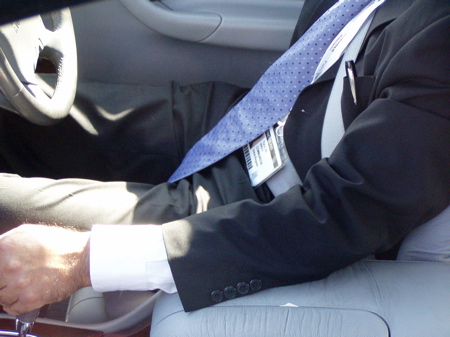 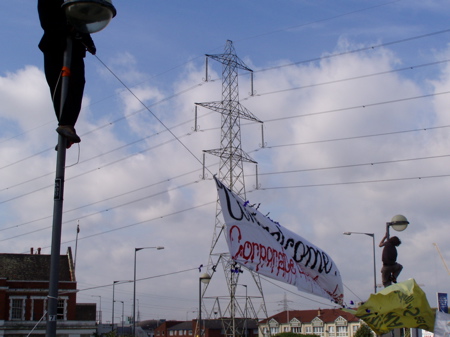 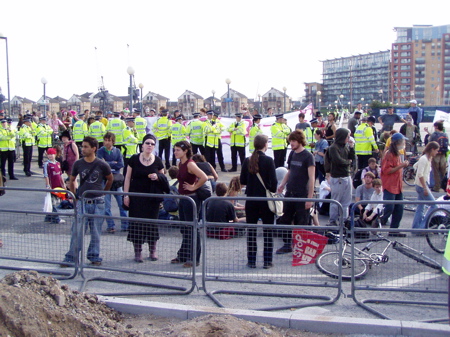 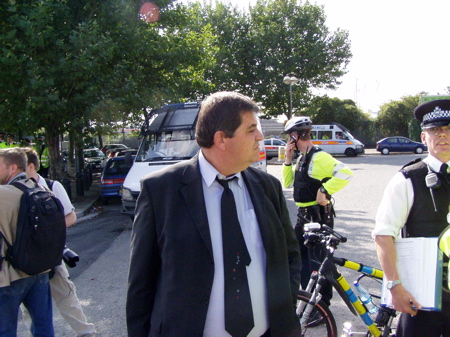 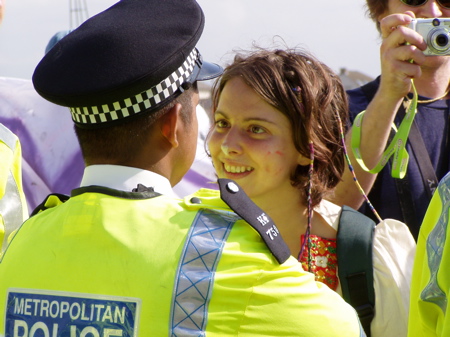 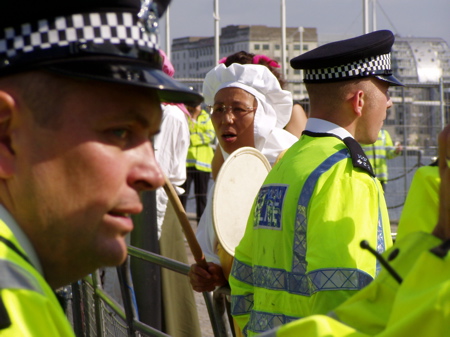 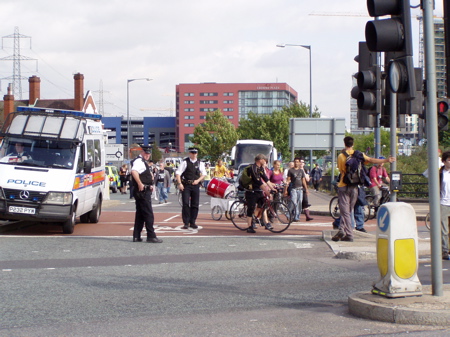 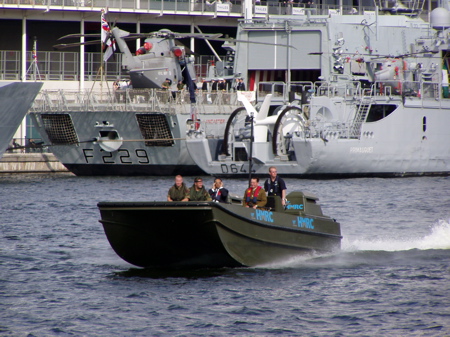 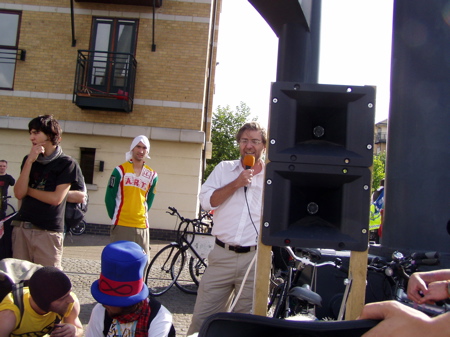 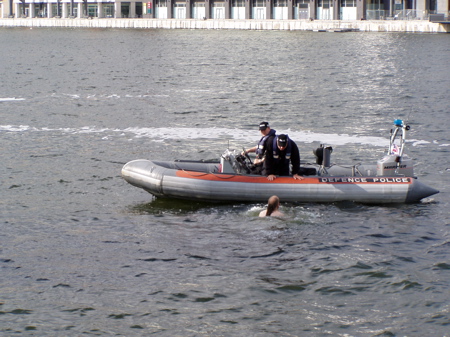 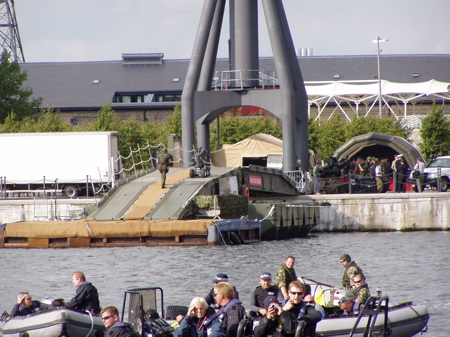 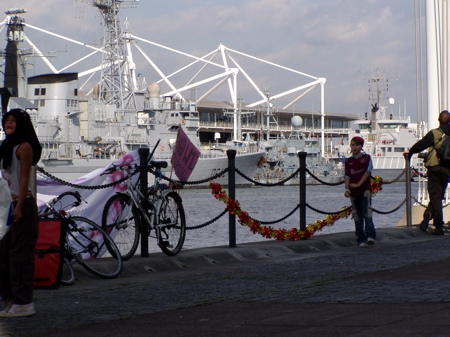 36 prettying up the railings 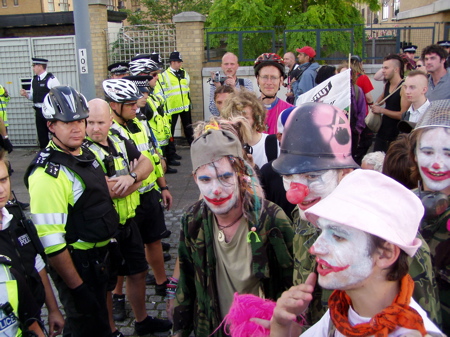 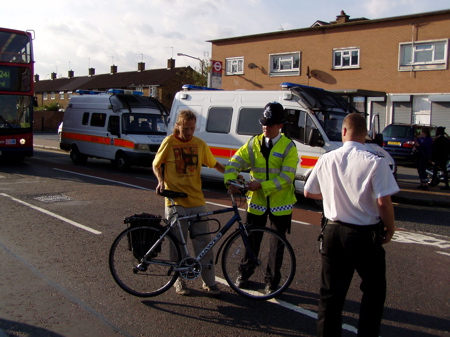 38 move away from the delegates sir 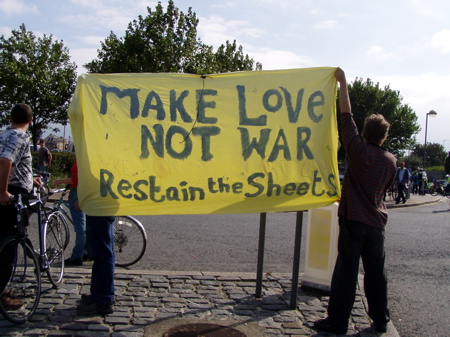 once the police had moved the riders on away from the lock on (see previous report), the mass took over the silvertown way flyover, and as the sun started to shine, bikes were parked, people rested, the sound system was on and some joyous square dancing (21) celebrated the taking of the bridge while the traffic backed up (22) for nearly half an hour. others decorated the road with chalk (23). earlier, a woman sambista was injured by police on the flyover and taken to newham hospital with a head injury.

finally, the crowd moved on to the west entrance of the excel building, where they stopped delegates and other drivers from entering the complex (24/25). some delegates took to foot, and skirmishes ensued when one delegate was surrounded and police pounced in with over the top force to protect the scum bag. meanwhile, some climbers set up a banner across the roundabout in front of the entrance (26), a group sat down in the exit area (27), delegates walked around disorientated (28), and the clown army, who had been previously penned in, resorted to staring games to try and effect their escape (29). the buddhist (who had been penned with the clowns) looked bemused (30).

after the fun and games at the west entrance it was time to move on again (31), and this time the ride aimed for the south side of the centre, just a short albert dock's worth of water away from the excel centre. although this area had been excluded on previous dseis, the ride managed to get there and set up a sound system just across from the centre.

while police boats filmed, and army boats gave free rides to delegates (32), the samba band rocked, and speeches (33), rapping and other music disturbed the arms fair. at one point, a brave lone protester tried to swim for it, but was forced back by some extremely irate cops in boats (34).

while soldiers demonstrated their toys (35) to delegates, their war fantasies were disrupted by the noise from across the water. children decorated the railings with tinsel (36). there was one incident in which a demonstrator took offense at a police cameraman in his face, put up his hand, got attacked by another cop and in the fracas that ensued got arrested. tensions were calmed by the antics of some clowns that had escaped the west end pen to join us (37). another young woman was arrested for alleged criminal damage when she was chalking the road, but otherwise things remained peaceful.

round at custom house, a group of protesters were haranguing delegates as they left, though attempts to do this from anywhere other than the 'designated protest zone' were met with police resistance (38)


all in all, the critical mass actions were very effective, and it seemed in contrast to yesterday's c.a.a.t. march that the police were actually unusually facilitative. i can't remember being allowed onto the albert dock south side of the complex in previous years. maybe it's true the met themselves don't want this arms fair here anymore (though probably for different reasons than us).

other snippets of news to finish (probably reported elsewhere on indymedia). there were some successful lock ons and actions on the dlr and the tube this morning, although one young woman was attacked and allegedly kicked in the head by delegates. an independent film of this was confiscated by police.

and finally, mark thomas was observed INSIDE the excel centre by journalists covering the fair - how the hell did he manage that one!! :)