some pics from dorchester dinner protest 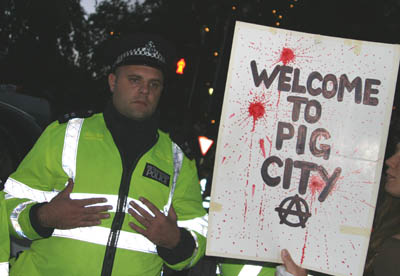 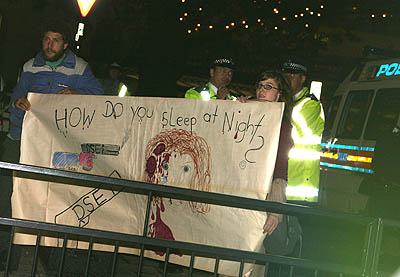 can you sleep at night?? 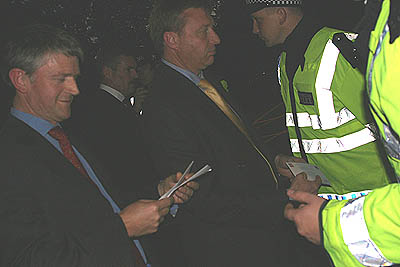 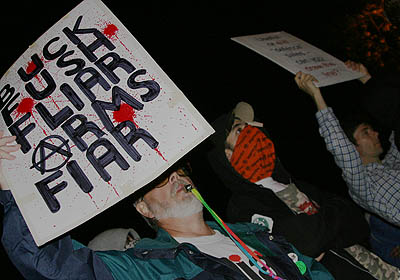 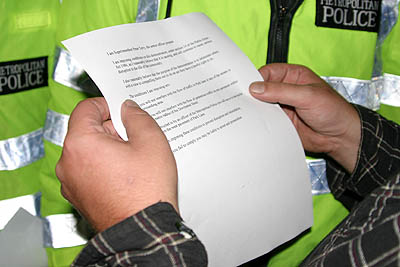 i am perry terry

on my way there i got stopped and searched with the suspicion of being carrying paint that i would have thrown to people...dont know what u are talking about...
they insisted for me going to pick up my report at charing cross police station, cause it would have taken them about 20 mins to write everything down...strange enough when i said i was not in a rush , my report was ready in just few minutes and i was able to reach a small group of protesters cornered on a side of the dorchester hotel
even if not in front of the hotel we managed to scream our opinion to some delegates making their way to the hotel, with police kindly letting them trough their security cordon only after showing their tickets...some lucky tourists were let in as well cause they had a room reserved in the hotel...
so we could appreciate the well done job of police as doormen, as kriptick mentioned in his article , but also the presence of other groups of protesters blocked in other pens...critical mass was there and samba was played
there was couple of arrest in our pen that i could not record properly with my camera , but there was a guy with a video camera that should have something interesting recorded...hopefully we will see his video soon...it would be nice!!
after the arrests, police started to distribute between them leaflets from superintendent perry terry , then kindly they passed some of the leaflets also to the protesters; then they started pushing us away, without really giving the time or opporunity to read the leaflet
i left when the rain started but i am glad to find out that some patient protesters remained around the hotel for longer
thanks to anyone that participate to last night protest, but also to any other protests during this week
love and solidarity
blackbee
please, dont waste your time in replying to stupid messages that people is uploading about all these protests being useless...useless is the people that has nothing better to do then criticizing the actions of all the ones that really cannot shut their mouths and take action instead of only moaning from their sofas!!!