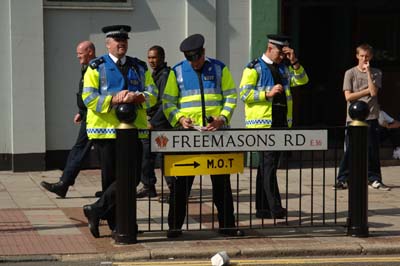 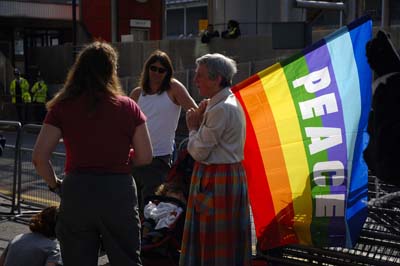 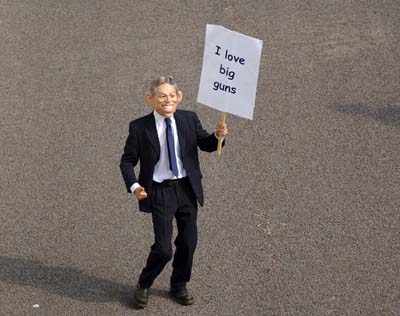 peace! not in my time 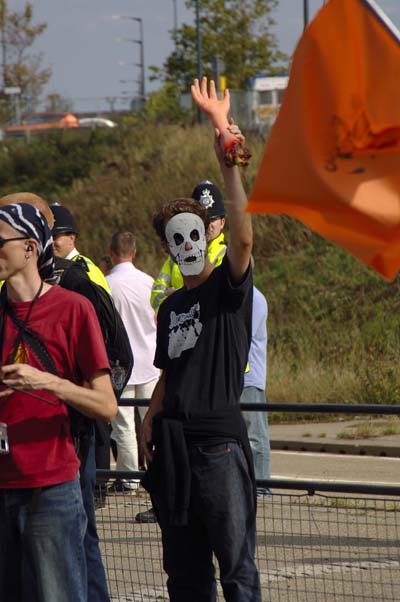 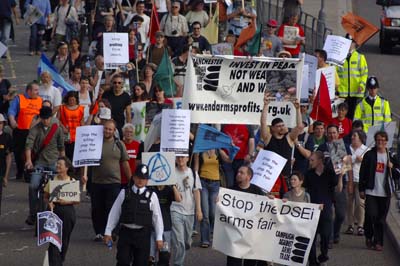 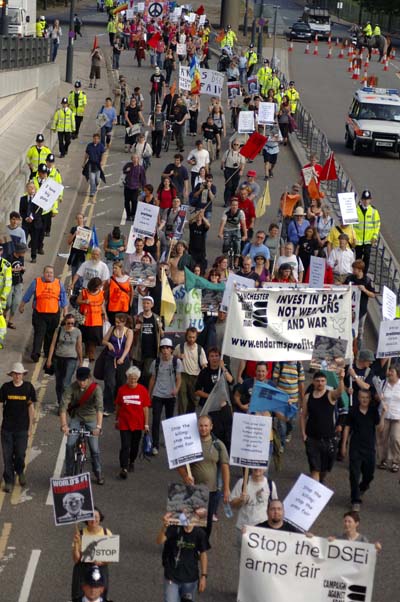 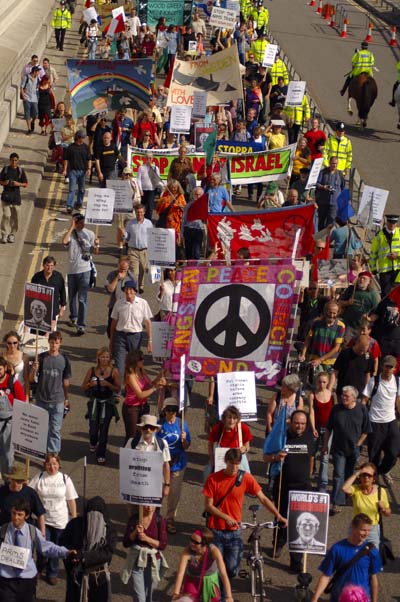 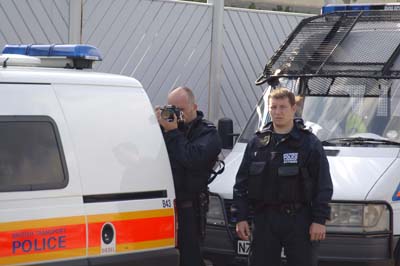 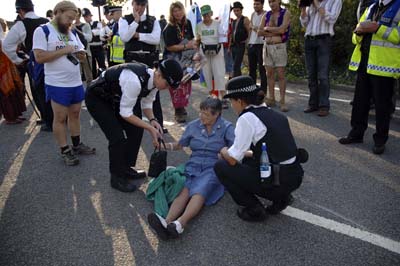 There was no need to arrest this lady 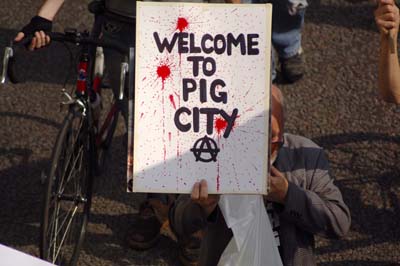 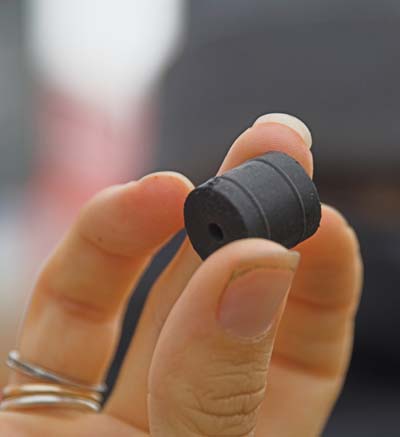 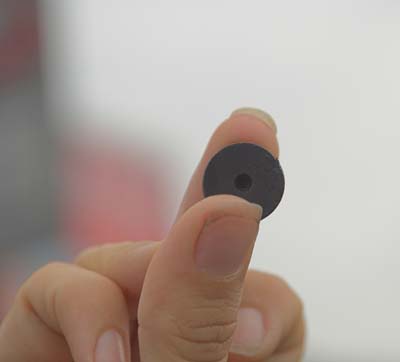 another view of RB 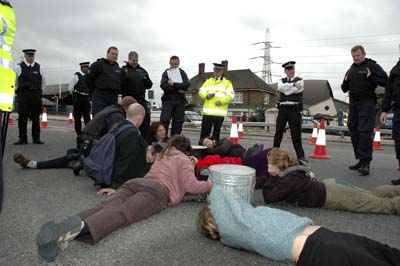 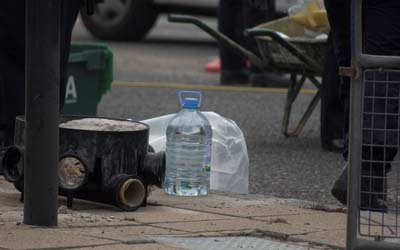 it took police 4 hours to break them out

dancing on the streets 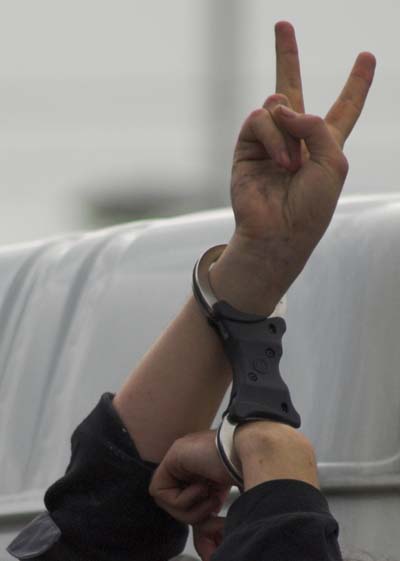 victory even though handcuffed 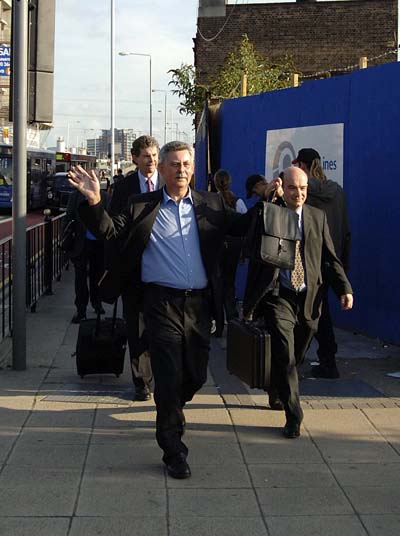 Arms delegate surrenders after train actions, or says don't shoot me which i did

And where was this 'rubber bullet' fired? It certainly wasn't fired by the Met/City two days previous.

rubber bullet!!!!! was this reported? any more info

i've read a lot of indymedia reports, and also attended much of the dsei protests but this is the first i've heard of rubber bullets - can anyone confirm and expand on this story?

It's bollocks due to A)that is nothing like a rubber bullett, a real one is about 10 times bigger and B) this is London , not northern ireland, th Met don't fire them about, if they did you would know about it...!!!

Why make up MORE lies to pretend you are making a change, your not.... Sort your life out.

Having had rubber bullets shot at me in the past, that is definitely a genuine article - one of the all-rubber ones, as opposed to the vatiety of 'rubber' bullets which are in fact balls of metal with a plastic coating. I don't know where it could have been shot at anyone - they might, afterall, have come from abroad - but anyone who reckons that they're 10 times bigger than that is absolutely mad.

OK let me explain unfortunately the full title did appear on uploading the pics
it should read rubber bullet fired at peace activist two days earlier in Palestine.

Sorry for your paranoia

For the paranoids out there

I'd be curious to know how many of those Intelligent Munitions Systems (see below videos) have been sold by Textron Systems during DSEi.

My bet is that "non-lethal" versions of this weapon system with rubbers or anesthesic needles insted of explosives have also been develloped and been bought by police forces for future "riot control" ops now that the technology has proven to be so effective and devastating on the Iraqi battlefield.

Bearing in mind it could be adapted to be also dropped from helicopter on crowds like Textron's other product, the sensor fuzed weapon is dropped on tanks columns by B52s. (see below videos also)

Fitting "law enforcement" personnel or moles with RFID tags (size of a grain of rice) regognized by the smart weapon will prevent them getting hit by the intelligent submunitions even if deeply mixed in crowd that is being attacked.

I think it has been proven by DESI activists that all those death salesmen aren't safe enough as they could be too easily accessed by "threats" as shown on many pics.

Next time they'll fly them in with helicopters and "non-lethal" smart weapons will be there for activists.

Be warned because they won't tell you before like they didn't tell the Iraqis they had that stuff before they used it on them.

Also there is someone called Muhammad Abu Nasr and the Free Arab Voice/Islammemo/mafkarat al islam that posts since two years all over the net from servers located in the US how easy it is to succesfully attack and kill US troops in the open in Iraq. I think that this operation only exists as to bait Iraqi resistance fighters into being killed by IMSes that US forces are obviously using extensively over there.